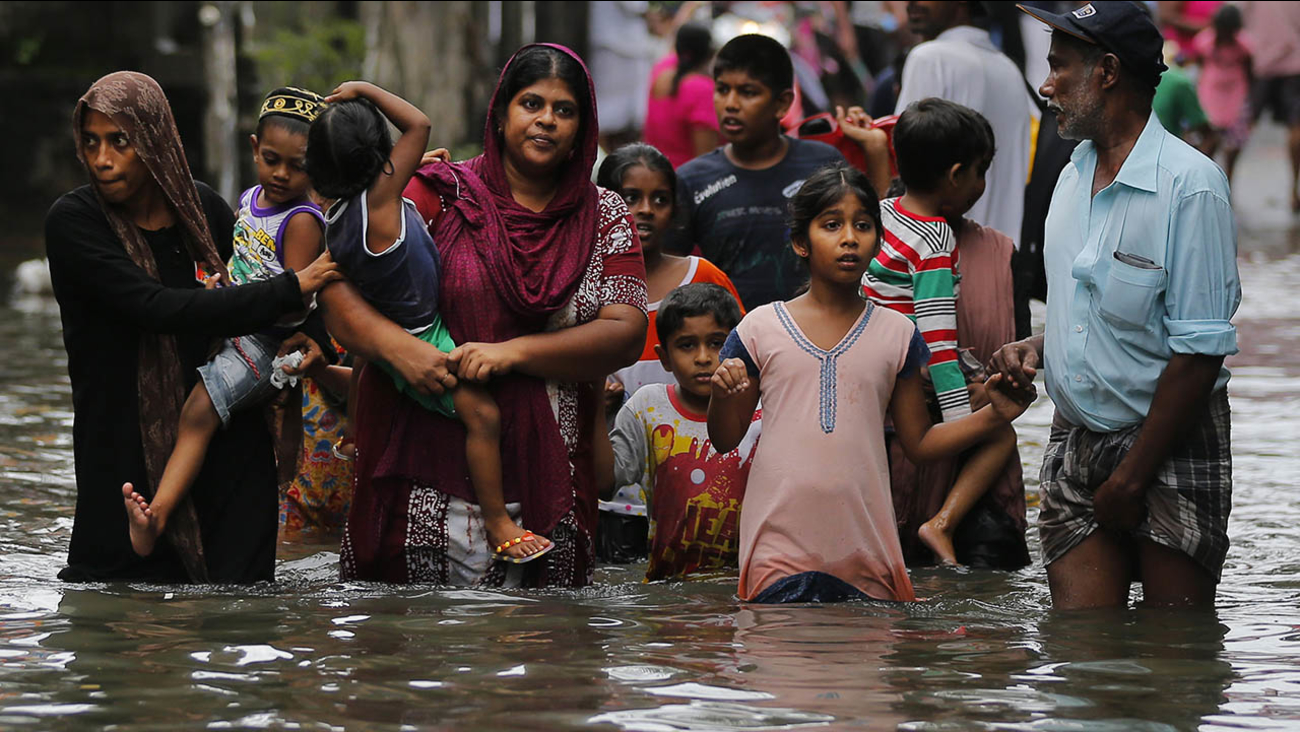 Sri Lankans wade through a road submerged in flood waters in Colombo, Sri Lanka, Tuesday, May 17, 2016. The Disaster Management Center said that 114 homes have been destroyed and m

SRI LANKA -- A massive landslide triggered by torrential rains buried homes in three villages in the central hills of Sri Lanka, and more than 200 families were missing Wednesday and feared buried under the mud and debris, the Sri Lankan Red Cross said.

Sixteen bodies have already been recovered and about 180 people have been rescued from the enormous piles of mud unleashed at around 5 p.m. Tuesday, according to military spokesman Brig. Jayanath Jayaweera.

More than 300 soldiers were deployed to search for survivors in the villages of Siripura, Pallebage and Elagipitya in Kegalle District, about 72 kilometers (45 miles) north of Colombo, Jayaweera said. Heavy fog and continuing rain, along with electricity outages and the instability of the ground, were complicating rescue efforts.

Some 220 families were reported missing on Wednesday, the Sri Lankan Red Cross said in a statement. Officials said the situation was unclear.

State broadcaster Rupavahini showed images of huge mounds of earth covering houses, while torrents of muddy water gushed from hilltops above. Villagers said 66 houses had been buried or damaged, according to local journalist Saman Bandara.

A total of 1,141 people who escaped the disaster were sheltering and being treated for minor injuries at a nearby school and a Buddhist temple, according to government official Mahendra Jagath.

The same rains that unleashed the mudslides have also caused severe flooding in cities including Colombo, the capital, where tens of thousands of homes were at least partially inundated. Schools were closed due to the bad weather.

Sri Lanka's disaster management center had reported 11 deaths from lightning strikes and smaller landslides elsewhere in the Indian Ocean island nation on Monday and Tuesday. Nearly 135,000 people across the country have been displaced and were being housed in temporary shelters.

Officials warned that more landslides and lightning strikes could occur in the countryside, as more rain was forecast along with rough seas along the coasts.

Mudslides are common in Sri Lanka during the monsoon season, with heavy deforestation to clear land for agriculture leaving the countryside exposed.

During heavy rains in December 2014, Sri Lankan authorities evacuated more than 60,000 people from thousands of homes damaged or destroyed by floods or landslides. Two months before that, dozens of tea plantation workers were killed when mudslides buried their hillside homes.
Related topics:
u.s. & worldmudslide
Copyright © 2021 by The Associated Press. All Rights Reserved.
More Videos
From CNN Newsource affiliates
TOP STORIES