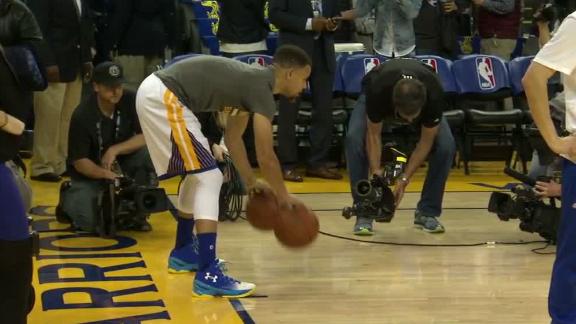 OAKLAND,CA -- As Stephen Curry emphatically waved his arms to ignite the crowd and coached from the bench when he could do little else, Klay Thompson and the Golden State Warriors' supporting cast picked up the slack for their absent NBA MVP to hold off the Houston Rockets 115-106 on Monday night and take a 2-0 lead in their playoff series.

Thompson scored 34 points and dished out five assists for the defending champions, playing without Curry because of an injured right ankle. Curry cut short his pregame warmup routine after appearing to be in discomfort as he was shooting while putting little pressure on the tender ankle.

Now, Curry has until Thursday's Game 3 in Houston to get healthy.

James Harden had 28 points and 11 assists to lead the Rockets, losers of six straight and 14 of 15 to Golden State. He made 13 of 15 free throws after not attempting one in the opener.