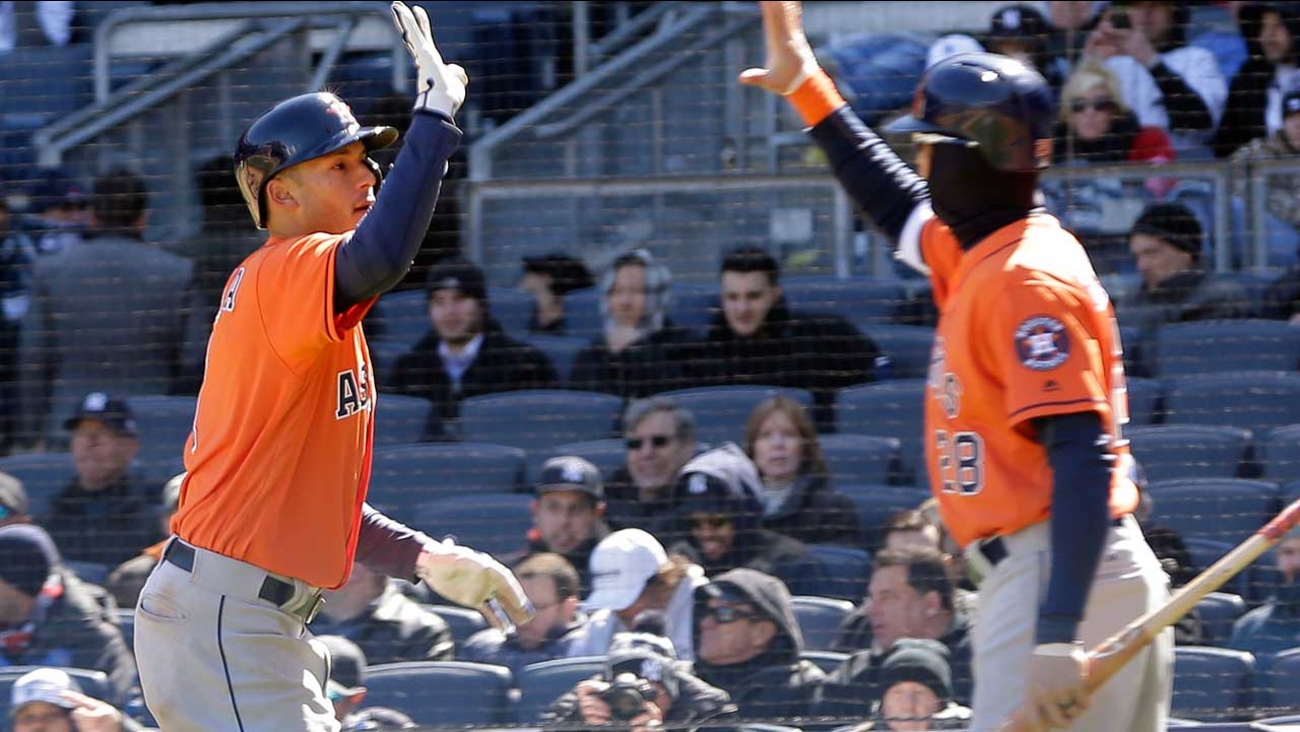 NEW YORK -- A freezing opening day at Yankee Stadium turned on a play that caused a hot argument.

Carlos Correa reached on an eighth-inning dribbler that Dellin Betances threw over first baseman Mark Teixeira as Jose Altuve scored the tiebreaking run, and the Houston Astros went on to beat the New York Yankees 5-3 Tuesday to win four straight openers for the first time in franchise history.

Yankees manager Joe Girardi argued with plate umpire Dana DeMuth that Correa should have been called out for running on the fair side of the foul line, causing Betances (0-1) to throw the ball over Teixeira for an error.

After the four umpires conferred, the call was upheld and Girardi played the remainder of the game under protest. Luis Valbuena added a two-run single on Betances' 30th and final pitch for a 5-2 lead.

Dallas Keuchel dominated, but not quite as much as in last October's AL wild-card game. Keuchel (1-0) allowed Starlin Castro's two-run double in the second, which ended the AL Cy Young Award winner's 29-inning scoreless streak against New York, but gave up just three hits in seven innings, struck out five and walked four - his most since last June 20.

Didi Gregorius homered on a 96 mph fastball in the eighth from Ken Giles, who lost to Luke Gregerson in the competition for Astros closer, and Gregerson got three straight outs in the ninth for the save.

It was 27 degrees when batting practice began, and there were tiny ice crystals on the infield from a morning watering. The temperature rose to 36 with a stiff wind and a cloudless sky at game time, the coldest for a regular-season Yankees game in the Bronx since their 2003 home opener.

#Astros Hinch: Tyler White is doing OK. Precautionary X-rays on his ring finger. Told Hinch he was numb. Everyone is in the cold.

Only about half the seats appeared to be occupied, and hardly any in the owners' box. But players did have a few amenities in a ballpark that opened eight years ago - vent blew hot air into the dugouts and the bat racks were heated, keeping the wood warm.

Castro, acquired from the Chicago Cubs to give the Yankees another left-handed bat, pulled an 85 mph cutter down the left-field line in the second for a 2-0 lead.

Left fielder Aaron Hicks, like Castro making his Yankees debut, misjudged Jose Altuve's liner leading off the fourth and allowed it to soar over him for a leadoff double. Correa grounded into a forceout that scored Altuve, and Correa tied the score in the sixth when he sent a splitter from Masahiro Tanana over the right-field scoreboard.

Starting his third season with the Yankees, Tanaka allowed two runs and four hits in 5 2/3 innings.

Houston's Tyler White, a 33rd-round draft pick in 2003, pinch hit in the seventh and singled in his big league debut. He was hit on the right hand by the first pitch of Johnny Barbato's major league career.

Joe Spillo and John Welch of suburban Yorktown Heights, wearing yellow and green Teenage Mutant Ninja Turtles outfits, were in the second row of the Legends Suites luxury seats behind home plate after winning the tickets for 25 cents each from HBO's "Last Week Tonight with John Oliver." The host of the weekly show, claiming the Yankees are elitist, is selling seats to fans who promise to dress like "riff-raff."