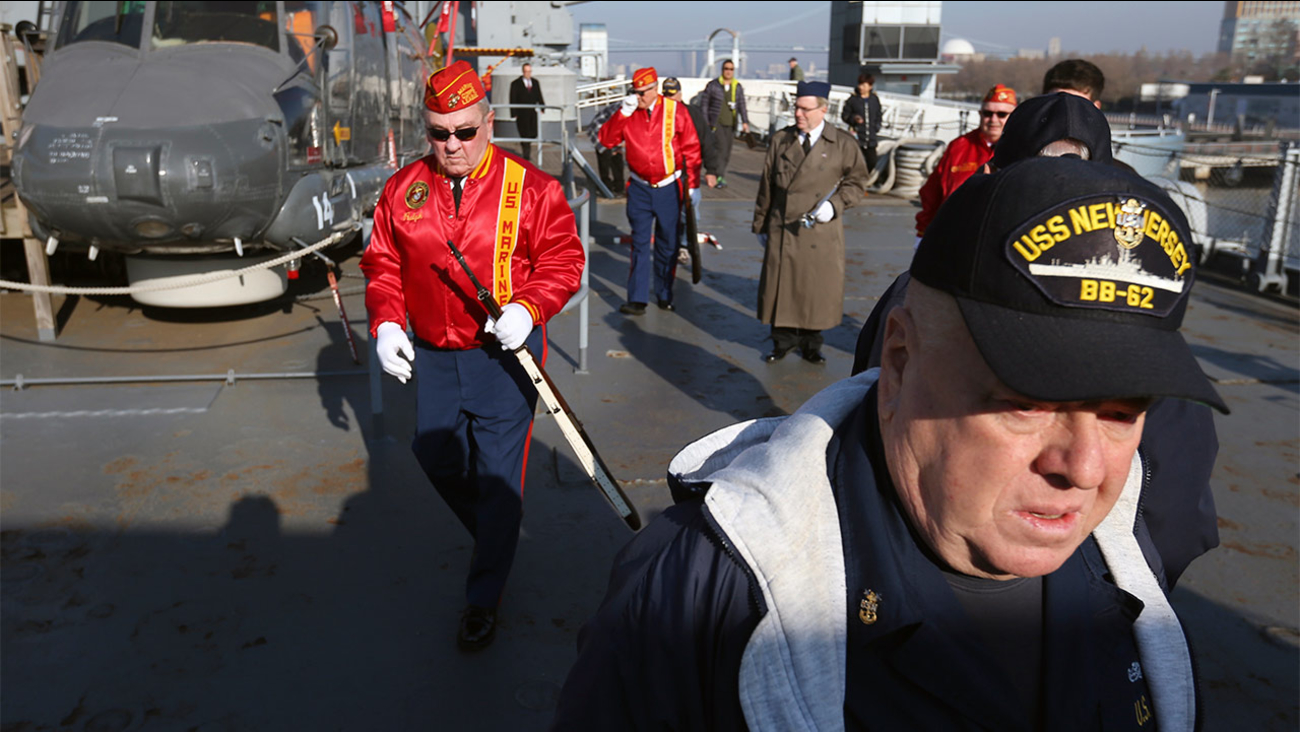 Volunteer worker on the battleship USS New Jersey arrive with others during a commemoration of the 74th anniversary of the attack on Pearl Harbor. (AP Photo)

PEARL HARBOR, Hawaii -- A few dozen elderly men who survived the Japanese bombing of Pearl Harbor 74 years ago gathered Monday at the site to remember fellow servicemen who didn't make it.

The U.S. Navy and National Park Service hosted a ceremony in remembrance of those killed on Dec. 7, 1941. About 3,000 people were expected to join the survivors.

Adm. Harry Harris, the top U.S. military commander in the Pacific, said the day "must forever remain burned into the American consciousness."

He said the military was also working to "keep the alarm bell from sounding in the first place" by refocusing its attention on Asia and the Pacific region with the aim of maintaining stability, prosperity and peace.

Robert Irwin, 91, of Cameron Park, California, was in the barracks when the attack began and saw Japanese planes flying overhead. A fellow sailor saw a Rising Sun insignia on the wings and asked Irwin if he knew what the "red ball" was.

The seaman first class hopped on a truck that took him to the USS Pennsylvania, where he fed ammunition to the deck of the battleship.

"It brings back some lousy memories," said Irwin, of returning to Pearl Harbor. But he comes to the annual ceremony because the attack was a "big thing in my life." Irwin served as firefighter in San Francisco after the war and retired in as a lieutenant in 1979.

The event is being held on a Navy pier overlooking the USS Arizona Memorial. It straddles the battleship that sank nine minutes after being hit. It remains a gravesite for many of those killed.

The Navy destroyer USS Preble was to sound its whistle to start a moment of silence at 7:55 a.m., the minute the attack began 74 years ago. Hawaii Air National Guard F-22s would fly overhead to break the moment of silence.

During the attack, roughly 2,400 sailors, Marines and soldiers were killed at Pearl Harbor and other military installations on the island of Oahu.