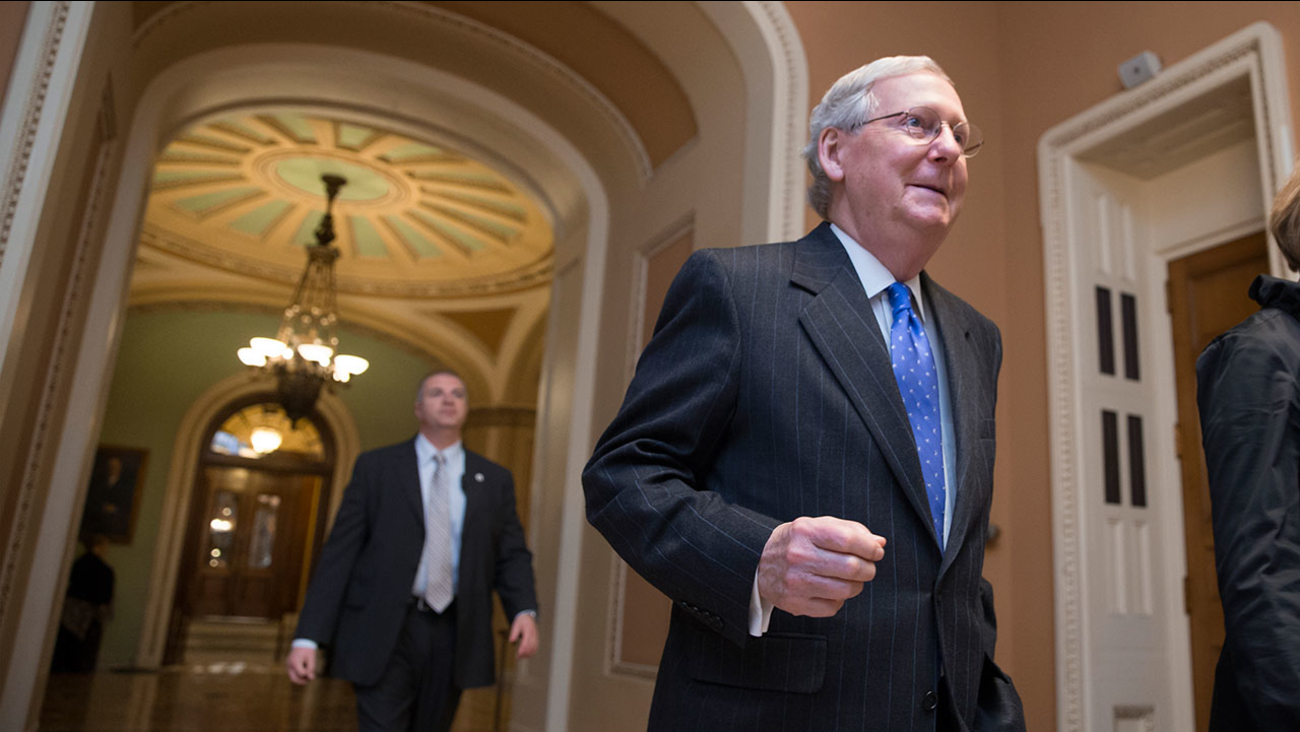 With a House rubber stamp expected in days, the bill would be the first to reach Obama's desk demolishing his 2010 health care overhaul, one of his proudest domestic achievements, and halting federal payments to Planned Parenthood. Congress has voted dozens of times to repeal or weaken the health law and several times against Planned Parenthood's funding, but until now Democrats thwarted Republicans from shipping the legislation to the White House.

Republicans said an Obama veto - which the White House has promised - will underscore that a GOP triumph in next year's presidential and congressional elections would mean repeal of a statute they blame for surging medical costs and insurers abandoning some markets. They lack the two-thirds House and Senate majorities needed to override vetoes, assuring that the bill's chief purpose will be for campaign talking points.

"President Obama will have a choice," said Senate Majority Leader Mitch McConnell, R-Ky. "He can defend a status quo that's failed the middle class by vetoing the bill, or he can work toward a new beginning and better care by signing it."

Democrats noted that under the law, millions of people have become insured and said their coverage has improved, with policies now required to insure a wide range of medical services.

"Do they talk to their constituents? Do they meet with them?" Senate Minority Leader Harry Reid, D-Nev., said of Republicans.

With just a 54-46 edge, Republicans had until now been unable to push such legislation through the Senate. This time, they used a special budget procedure that prevents filibusters - delays that take 60 votes to halt - and lets them prevail with 51 votes.

Party leaders initially encountered objections from some more moderate Republicans leery of cutting Planned Parenthood's funds and from presidential contenders, Sens. Ted Cruz of Texas and Marco Rubio of Florida, who threatened to oppose the measure if it wasn't strong enough.

In the end, Cruz and Rubio voted "yes." Moderate GOP Sens. Susan Collins of Maine and Mark Kirk of Illinois voted no, the only lawmakers to cross party lines, while Democratic presidential candidate Bernie Sanders, I-Vt., did not vote.

The Senate bill would all but erase the health care overhaul by dismantling some of its key pillars, such as requirements that most people obtain coverage and larger employers offer it to workers.

Also eliminated would be its expansion of Medicaid coverage to additional lower-income people and the government's subsidies for many who buy policies on newly created insurance marketplaces, such as HealthCare.gov. And it would end taxes the law imposed to cover its costs, including levies on higher-income people, expensive insurance policies, medical devices and indoor tanning salons.

The bill would also terminate the roughly $450 million yearly in federal dollars that go to Planned Parenthood, about a third of its budget. Federal funds can be used for abortions only in rare cases.

A perennial target of conservatives, the group has been under intensified GOP pressure this year for its role in providing fetal tissue to scientists. Citing secretly recorded videos of Planned Parenthood officials discussing such sales, some abortion foes have accused the organization of illegally providing the tissue for profit. The group says the videos were deceptively doctored and say it's done nothing illegal.

As they worked through the bill, senators voted on over a dozen amendments - all symbolic, since the measure was destined to never become law.

Senators rejected a pair of similar amendments that would have restored the Planned Parenthood money. They also blocked proposals for tightening gun curbs, a response to Wednesday's mass shooting in San Bernardino, California, last week's fatal attack on a Planned Parenthood clinic in Colorado and last month's terrorist massacre in Paris.

On another, senators voted 90-10 to permanently repeal taxes on high-priced "Cadillac" insurance policies, sending a strong signal of growing congressional momentum for erasing that levy.

GOP lawmakers said the overall bill could serve as a bridge to a future Republican health care law. Though Obama's overhaul was enacted five years ago, GOP members of Congress have yet to produce a detailed proposal to replace it.

"They've never been in a position where they want to change it and fix the law, it's either repeal or nothing," Sen. Jon Tester, D-Mont., who heads the Senate Democratic campaign committee, said of the GOP's failure to propose an alternative health law. "I'll take that to the polls and we'll talk about it until the cows come home."

Republicans argued the voters were on their side.

"We've reached a pretty scary time in our nation's history where we have Americans writing and calling their elected representatives saying they need relief from their own government," said No. 2 Senate Leader John Cornyn of Texas. "We have a mandate, I believe, to repeal this terrible law."