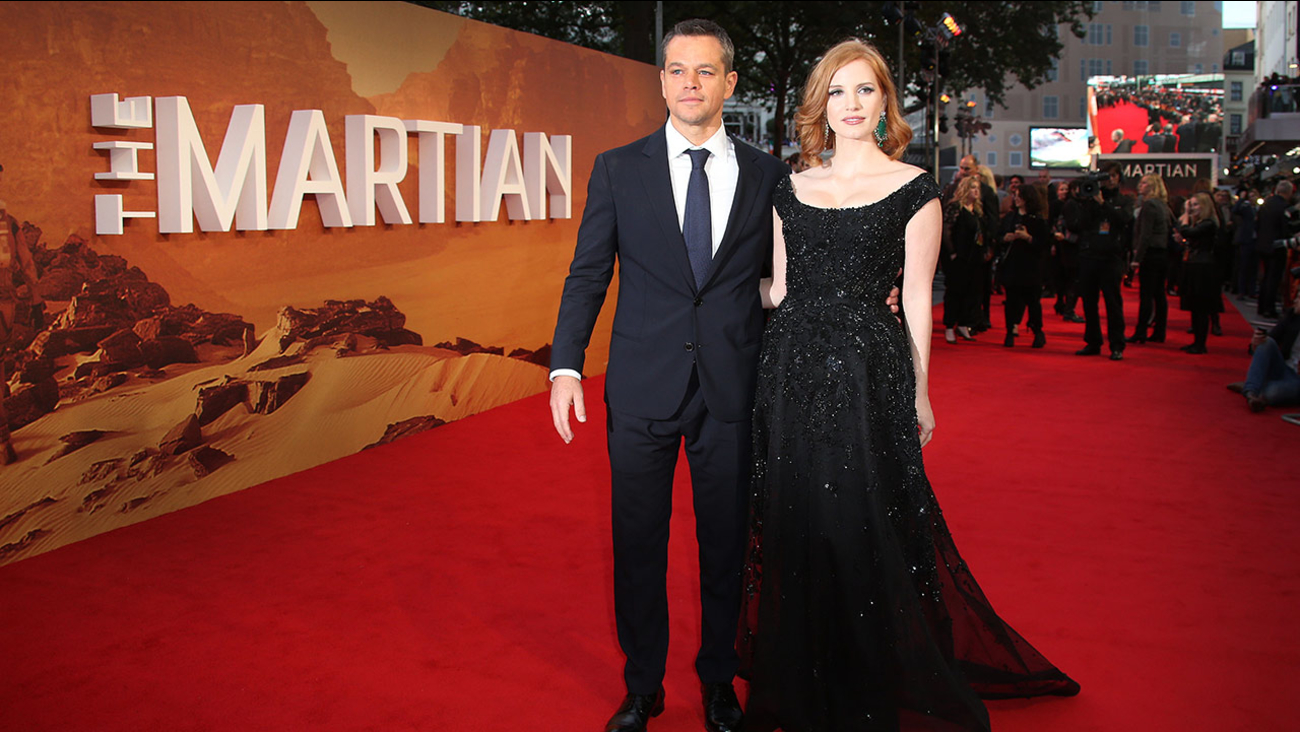 Actors, from left, Matt Damon and Jessica Chastain pose for photographs as they arrive on the red carpet for the European Premiere of, The Martian at a central London cinema. (Photo by Joel Ryan/Invision/AP)

Ridley Scott's 3-D space epic touched down in theaters with a robust $55 million over the weekend, according to studio estimates Sunday. The results again proved moviegoers' abiding thirst for space adventures, particularly ones that rely more on mathematics than monsters.

The 20th Century Fox release, starring Matt Damon as an astronaut left for dead on Mars, exceeded expectations to nearly rank as the top October debut ever. The estimated North American opening of "The Martian" surpassed that of Christopher Nolan's "Interstellar" ($47.5 million) and virtually equaled the debut of Alfonso Cuaron's "Gravity" ($55.8 million).

Made for $108 million, "The Martian" received a publicity boost earlier in the week when NASA announced it had found evidence of water on the surface of Mars - a cosmically fortuitous tie-in for a movie that celebrates NASA ingenuity. Adapted from the Andy Weir novel, "The Martian" - more "science-fact" than science fiction - relishes pragmatic scientific problem solving and NASA's spirit of exploration.

"What separates this movie - it has the backdrop of science - but all of the science is presented in a way that's very approachable for all," said Chris Aronson, head of distribution for Fox.

Aronson noted that the shift in release date from Nov. 25 to early October gave the film a more open path at the box office, where it could play well through the month. The film added $45.2 million internationally.

"Solid performances by recent space-related films like 'Interstellar' and 'Gravity' show that 'geeking-out' on all things outer space and science related in the movie theater is not only a popular pastime, but has now made science actually 'cool,'" said Paul Dergarabedian, senior media analyst for box-office firm Rentrak.

Yet October is proving especially busy with well-reviewed studio releases seeking broad audiences. Another acclaimed 3-D spectacle, Sony's "The Walk," took a back seat to "The Martian." Ahead of a wider opening next week, Robert Zemeckis' dramatization of Philippe Petit's World Trade Center stunt took in just $1.6 million on 448 Imax screens.

"You need word of mouth for this type of film and that's what this weekend was all about," said Sony distribution head Rory Bruer, who granted it's a "crowded field." The film will look to parlay strong reviews out of its New York Film Festival debut and buzz from its vertigo-inducing 3-D next week.