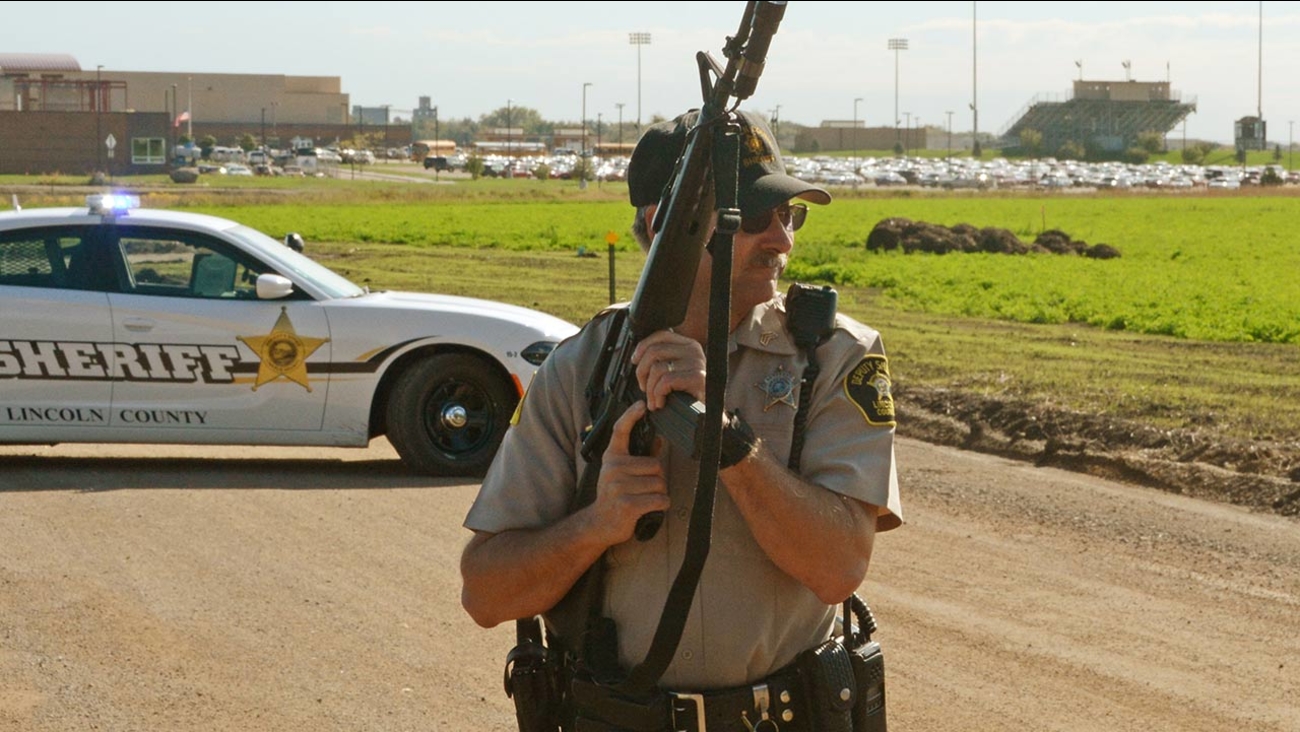 HARRISBURG, SD -- A shooting at a South Dakota high school that left the principal with a minor injury may have turned out far worse if not for staff members who tackled the student suspected of firing at the administrator, authorities said Wednesday.

Just moments afterward, Harrisburg High School Principal Kevin Lein took to the intercom to announce a lockdown and tell students he had been hit, "but was fine," senior Aanna Okerlund said. Other than Lein, who was struck in the arm, no one was reported hurt.

Police said the student had confronted Lein in his office about 10 a.m. Wednesday before pulling out a handgun and firing a single shot that left the principal with a flesh wound. Assistant Principal Ryan Rollinger tackled the student and held him down with help from athletic director Joey Struwe, said Harrisburg Superintendent Jim Holbeck.

"You really never know what this student would have done if they haven't confronted him," Holbeck said. "I believe what happened there, what those guys did, probably helped saved somebody else from maybe getting shot. I can't tell you what was in his mind, but if he already shot once, who knows."

Officers quickly took the student into custody. Lincoln County State's Attorney Tom Wollman declined to confirm the student's identity but said he expected charges to be filed within a day. South Dakota law gives prosecutors some latitude in deciding whether to pursue felony charges against those under 18 years of age in juvenile or adult court.

A South Dakota man told The Associated Press that his 16-year-old son is the student who shot Lein. He said his ex-wife, with whom his son lives, called to tell him that their son had been arrested following the shooting. He said his son's been quiet over the past year.

"Something's just going on inside of him and he's just mad at everybody, I think," the father said. "I don't know what would've made him do something like this."

He didn't say where his son got the handgun, but said that he and his son would regularly target shoot outside and that his son had taken gun safety courses.

The Associated Press is not naming the man so as not to identify his son, who has not been charged in the shooting or identified by authorities.

Officials say they don't know what spurred the dispute at the school, which has about 635 students from Harrisburg and other communities. Harrisburg, a town of about 5,000 residents, sits 10 miles south of Sioux Falls.

Okerlund, 18, said she was in college algebra when a classmate ran into the room to tell everyone he had seen a student near the principal's office with a gun.

She said Lein came onto the intercom shortly afterward to tell students there was a school-wide lockdown. Lein later told students by intercom that he had been shot.

"You could hear the franticness in his voice," she said. "It's just so surreal."

Okerlund said her classmates were crying and shaking in the corner of the classroom while they waited for news during the lockdown.

As authorities continued to shut off access to the high school, students were taken by bus to Harrisburg South Middle School, where parents were asked to pick them up.

Junior Jerica Warwick, 16, said students were texting or calling parents to let them know they were safe after they were all gathered at the middle school.

"Everybody either was shocked or crying," Warwick said.

Warwick's mother, Sheryl Holt, 35, of Sioux Falls, arrived to pick up her daughter. Holt said she hopes more safety measures will be put in place at the school, which does not have metal detectors.

Nick Pohlmann, who lives just across the street and has a son who is a senior at the school, said he found out about the shooting through a friend who called him asking if his son was OK. Pohlmann said he immediately drove back to his home and ran over to the school to try to get some information.