2 officers suspended for doing 'nothing' as man jumps, stomps on police car 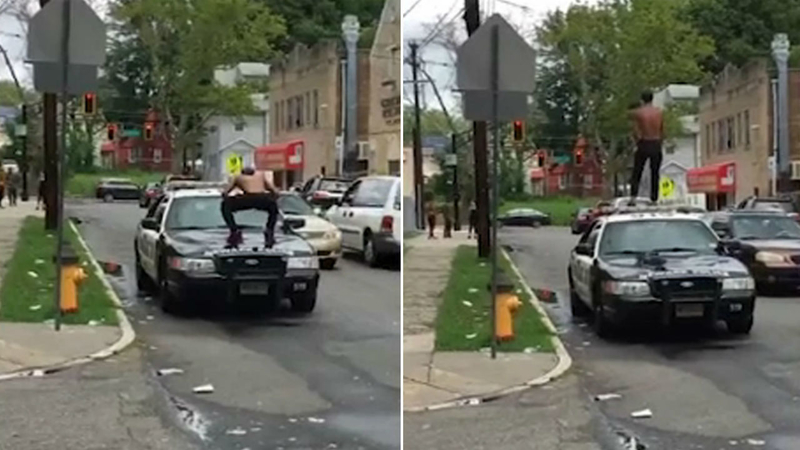 NEWARK, New Jersey -- Two Newark police officers have been suspended after a video of a teen jumping on a police car went viral over the weekend.

Police launched an investigation after the video showed an officer staying in his squad car while the Newark teen jumped on the vehicle.

Authorities say a second officer responded to the scene as backup, but waited before engaging with the teen.

Authorities said that 18-year-old Altahriq Aulston has been arrested on three charges of criminal mischief.

The department says the officers should have stopped the man, but instead they did nothing.

"All officers are trained to respond in various types of situations, including ones where they encounter unstable individuals. These officers instead took no action at all to quell the situation, and to aid and subdue the suspect, as they are trained to do. This lack of action could have resulted in the suspect injuring himself, as well as other persons or property," Newark Public Safety Director Anthony F. Ambrose said.

Some think the officers showed restraint and their actions may have actually helped to diffuse the situation.

"The majority of Newark Police Division officers are proud and hardworking," Ambrose said. "The Newark Police Division and the citizens of Newark deserve better than what was demonstrated by these officers. They had an opportunity, and an obligation, to help the suspect, who was acting irrationally, and they failed to do so. We should not confuse restraint with a lack of response. If they did not help themselves, then how can we expect them to help the citizens that they serve."

The names of the suspended police officers have not been released.