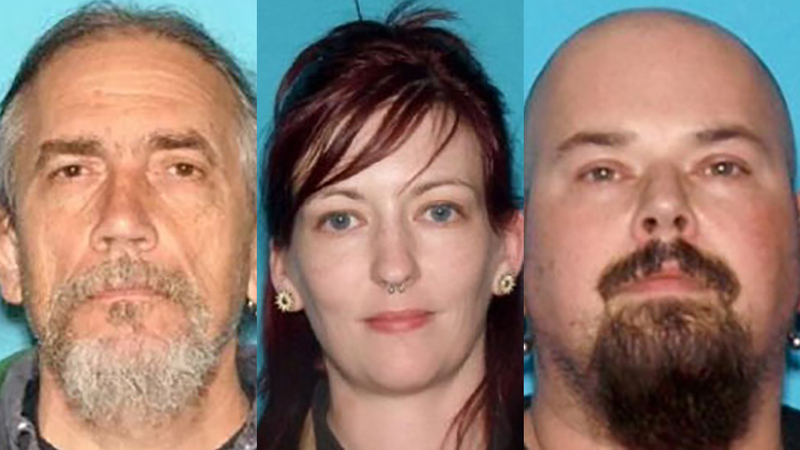 MAYS LANDING, New Jersey -- Seven people have been indicted in the slaying of a New Jersey radio show host whose murder allegedly was arranged by her late husband to prevent her from exposing a drug ring he was running with an outlaw biker gang.

"An Atlantic County Grand Jury took a critical step towards rendering justice to April Kauffman and her family," Prosecutor Damon Tyner said in a statement. "Ferdinand Augello was indicted for the murder of April Kauffman, racketeering and drug charges. This office looks forward to presenting the facts of this case to a jury for them to determine culpability for this heinous scheme."

April Kauffman was found dead in her Linwood home back in 2012. Kauffman's husband, 68-year-old Dr. James Kauffman, was also charged in the case, but he was later found dead in prison from an apparent suicide.

He was accused of having his wife killed in order to protect an alleged drug ring he ran with the Pagans Motorcycle Club.

Investigators say it all began back in 2011, when April Kauffman threatened a divorce. She threatened to spend as much money as she could until a divorce was granted and threatened to expose the drug operation, Tyner said.
EMBED More News Videos

James Kauffman and Augello - a member of the Pagans - began looking for a hitman at that time, investigators said. According to the prosecutor, Kauffman said he would rather kill April than grant the divorce and lose "half his empire."

It took nearly a year, but Tyner said a hitman was eventually found. That man is identified as Francis Mulholland. Authorities said Mulholland is an associate of Joseph Mulholland, an alleged member of the drug enterprise.

Investigators say it was Francis Mulholland who entered the Kauffman's home in Linwood and shot April Kauffman twice, killing her. The prosecutor said Mulholland was paid at least $20,000 in cash, though that number could be higher.

Francis Mulholland has since died of a drug overdose.

Investigators say Kauffman continued to run the drug operation even after his wife's murder. That all ended after his arrest in June 2017 on weapons charges. That incident included a standoff with police when authorities executed a search warrant at his office.

Dramatic body camera video from police showed him pulling a weapon and threatening to kill himself.
EMBED More News Videos

Defense attorney Ed Jacobs said his client was reacting in fear that he was being arrested for the murder of his late wife. Jacobs says Kauffman told this to police at the time: "I'm not going to go to jail for something I didn't do."

The other suspects were charged with their alleged roles in the drug operation Kauffman is accused of running out of his Egg Harbor Township medical practice.

April Kauffman was a local businesswoman who hosted weekly talk shows and advocated for military veterans. She had received a governor's award for outstanding community service a few days before her death.
EMBED More News Videos

April Kauffman's daughter addresses media after her stepfather, James Kauffman, was charged with murder on January 9, 2018.

Related topics:
new jerseymurderradiomurder for hireu.s. & world
Copyright © 2022 WPVI-TV. All Rights Reserved.
MURDER FOR HIRE
Alex Murdaugh faces 21 new charges in fraud investigation
Behind Chippendales was founder who orchestrated murder-for-hire plots
$8,500 offered for tips on woman accused of hiring man to kill husband
Brazoria County woman added to most wanted fugitives list
TOP STORIES
Daylight shows home destroyed after standoff with shooting suspect
What we know about man accused of shooting 3 HPD officers
Suspect arrested after 30-minute chase ends on I-45 in Texas City
Clouds clearing today, sunny through the weekend with rain next week
5 people charged in connection with Pct. 5 corporal's murder
How many times can I reuse my N95 mask?
Decades after TV anchor disappears, convicted rapist denies connection
Show More
Driver dies after slamming into 18-wheeler's trailer on US-59
Woman shot in the shoulder during robbery set up in SW Houston
Prepare for a major closure at I-69 and 610 West Loop this weekend
Officers escort body of corporal killed in ambush to funeral home
ABC13 obtains HPD scanner traffic of chase that led to shootout
More TOP STORIES News