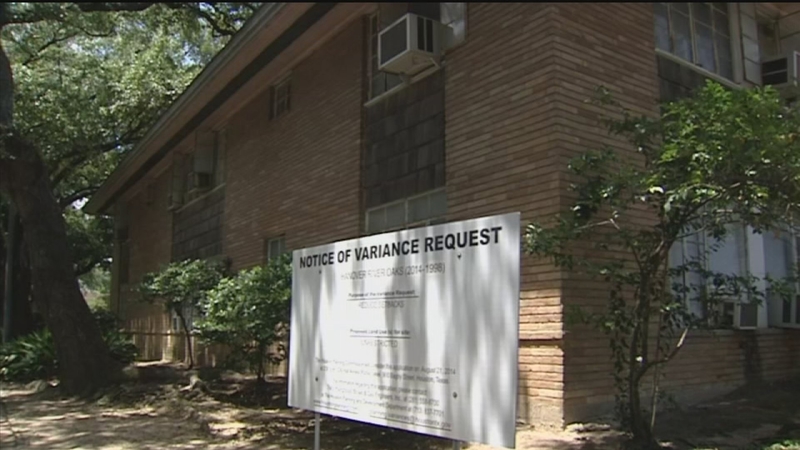 HOUSTON (KTRK) -- Another high-end apartment building is set to go up in Houston's inner loop, and some older apartments will have to make way for the new construction.

The signs requesting a variance are now in place in front of the Kirby Court apartments. The apartments, located at Kirby and Steel, were originally built in the 1940s. According to the manager of the complex, only a portion of the old apartments are slated to be torn down. The section of the complex South of Steel will remain, for now.

Developer The Hanover Company has purchased the plot of land that will include a portion of the current apartments, a former rug store, and a dog grooming salon. The sign that went up says it will be called Hanover River Oaks. Records provided by the City of Houston show it will be a high rise built on 1.587 acres of land.

The plants were submitted Monday. The company has told the city the building will have 370 units, including 187 studios and one bedrooms, 133 two bedrooms, and 50 three bedroom apartments. Restaurants are planned for the ground floor, and amenities on the 9th floor.

Residents that currently live in the complex do not have leases, and some are frustrated that they might get forced out.

"I just wish they would tell us something so I could have some time to look," says Katharine Kearns, who has lived at the complex for seven years. " I know with a pet dog, it's going to take me longer to find a place."

But managers say since half of the complex will be staying, they can accommodate all the displaced residents.

Another question is whether the majestic oak trees that provide canopy over Steel Street will be preserved. The Hanover Company has requested a variance. In looking at documents provided by the city, the company appears to want to protect the oak trees along Steel, and shift the entire development north toward Kipling.