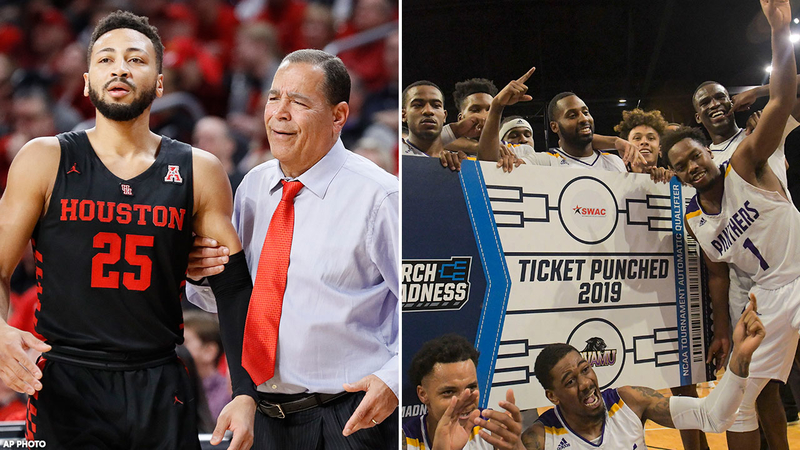 PRODUCER'S PICK: Tracking UH and PVA&M in the NCAA tourney

University of Houston and Prairie View A&M have their tickets punched in the NCAA Men's Basketball Tournament.

Each team learned Sunday when and where its respective journeys on the Road to the Final Four begins.

The Cougars were assigned the No. 3 seed in the Midwest Region. UH was the dominant leader in the American Athletic Conference, winning the regular season title. Houston fell short, though, in the finals of the AAC tournament and a bid for an automatic entry into March Madness.

Kelvin Sampson's club faces the same Panthers team that upset Baylor in a similar No. 3 vs. No. 14 opening round game in 2015.

Houston enters its 21st NCAA tournament with the 10th best scoring defense in the country, holding opponents to 61.6 points per game.

If UH gets past Georgia State, it will face the winner of No. 6 Iowa State vs. No. 11 Ohio State in the second round.

The other southeast Texas team in the 2019 tournament is Prairie View A&M, which won the SWAC regular season and tournament championships.

The winner of the matchup will earn the right to face West Region No. 1 Gonzaga.

This is Prairie View A&M's second ever tournament appearance. Its last bid in the tourney was in 1998 when it lost as a No. 16 seed vs. No. 1 Kansas.

Check out these tips from ESPN so that you can fill out your NCAA tournament bracket and win your March Madness pool.