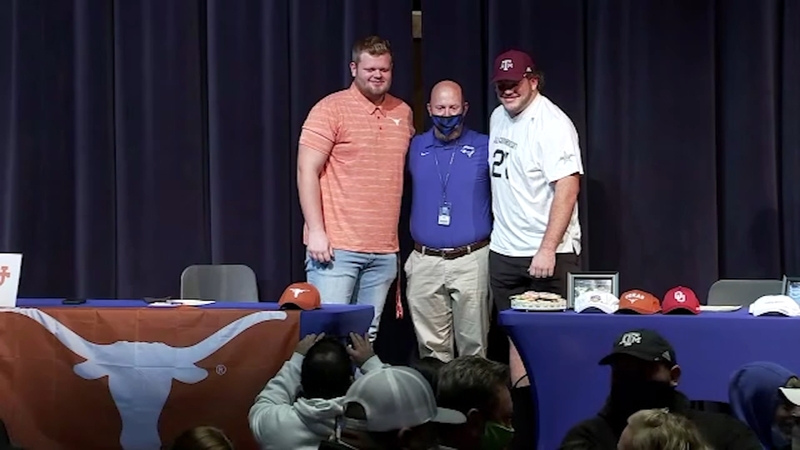 HOUSTON, Texas (KTRK) -- A star offensive lineman at Katy Taylor High School shared the next steps in his education and athletic journey as part of National Signing Day events.

He's the most powerful human in the history of the 🌎

Foster is among the several Houston-area student-athletes ready to see their college football dreams come true.

Students from schools all over the city were part of National Signing Day earlier in the week. But it was also a moment where young people who have worked hard to earn a scholarship were rewarded.

For Harris, this is a dream he has been working toward since he was a child - literally. He recalled how he was just 3 years old when he saw alum and former NFL player Vince Young.

"I've turned my dreams to reality and hard work really pays off. Long nights, just grinding, working out with many people, with trainers, trying to get better," Harris explained, adding that his parents have played a great role in his success.

Grant was also thankful to his family for their help on his journey, calling today "very special."

College dreams are coming true for some deserving and hardworking students. Hear from the two standout students at New Caney High School, who made their commitments.

For two North Shore High School stars, there's nothing like having your squad by your side - literally. The entire football team sat on the field to watch as their teammates Dematrius Davis and Shadrach Banks signed their letters of intent.

Davis, North Shore's quarterback, announced his commitment to Auburn University back in May. Davis chose the Tigers from a final list of four that included Texas A&M, LSU and Virginia Tech. He was previously committed to Virginia Tech, before choosing to make the jump to the SEC.

Davis' parents described him as an active child who could never sit still. Now, he'll get to share all of that energy on the field at Auburn.

"Going to miss my teammates and everything. It's a real brotherhood," Davis said of his mates at North Shore.

That brotherhood includes friend Banks who will start his college career at Texas A&M University.

"I wouldn't be able to get here without all my coaches and family and friends and teammates," Banks said.

"I always wanted to stay in Texas and play in the SEC and A&M is the only SEC school in Texas," he continued. "It's life after football that really matters. Being an Aggie will take me a long way."

In September 2019, Banks headlined Vype's list of top football players in the class of 2021.

WATCH LIVE on ⁦@abc13houston⁩ and on abc app

These two students will be one to watch for sure as the North Shore High School teammates and friends prepare to embark on even bigger journeys in the SEC.

For Shadow Creek High School star quarterback Kyron Drones, signing day was a dream come true. After being overlooked most of the season, Drones said he knew he had a lot of work to do in order to become a college football player.

"I felt like last year during early playoffs, I was being overlooked. But my dad told me I had to keep winning games because coaches wasn't going to overlook winners, and that's what I did," Drones said.

Most of his family, friends and teammates came out to see the 17-year-old commit to Baylor University. Drones' coaches and teachers spoke highly of him, saying how he always strived to make his dreams come true.

When asked why Baylor University, the teen said it came down to the amount of love and commitment the coaches and staff showed him.

"When they offered me, they just kept showing love. I committed nine days after they offered. I felt like that was the right decision for me," Drones said.

College dreams are coming true for some deserving and hardworking students. Hear from the one standout student at Shadow Creek High School, who made his commitment.

The defensive end didn't speak much during his signing, but he did take time out to thank his mother for all of her sacrifices.

Wanna thank @joeagleason for taking out the time for coming to our school and filming this huge moment for me and Sam Rayburn highschool much appreciation for you and @abc13houston https://t.co/TtSgH3Td4f

Tale of the tape:

College dreams are coming true for some deserving and hardworking students. Hear from the one standout student at Sam Rayburn High School, who made his commitment.

A successful signing day in Houston ended Wednesday with three Saint Thomas High School superstars committed to their prospective colleges in front of friends and family.

"God has blessed me a lot through my whole life. It's a blessing being here and being able to sign and play football at the next level. That has always been my dream," Bonner said.

#COMMITTED !! Thank you everyone for everything throughout this process... happy birthday mom and dad♥️
•
•
•
•
🎥 @iamSlimGus 💯 pic.twitter.com/U1EU9P63ke

Maddox Kopp committed to the University of Houston.

"It's always been a dream of mine to follow my brother's footsteps, and I'm just grateful for everyone at Saint Thomas," Kopp said.

"I'm excited for this new chapter of my life, and I cant wait to spend the next four years at Colorado State University," Martinez said.

WATCH LIVE on https://t.co/9kwpICNHHf abc13 app on apple, Roku, android or on your phone

College dreams are coming true for some deserving and hardworking students. Hear from the two standout students at Saint Thomas High School, who made their commitments.