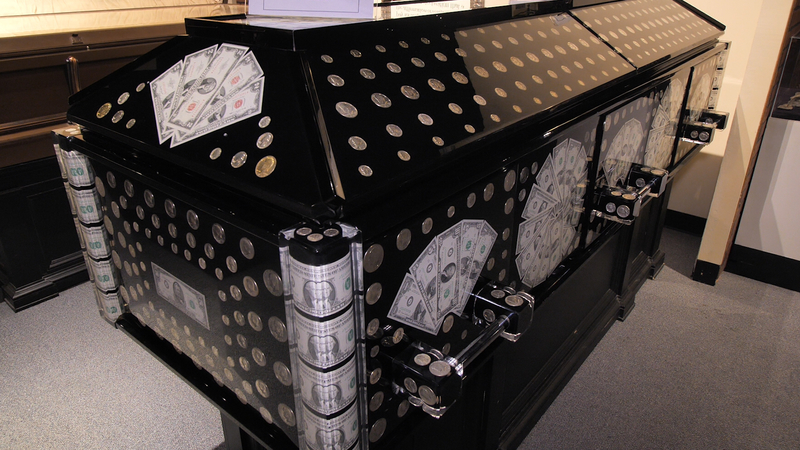 HOUSTON, Texas -- The National Museum of Funeral History is not a morbid place. It celebrates life, death, and how we say goodbye to the ones we love.

The museum was started in 1992 as a way to honor the funeral industry, including how it began and how it has evolved over the years.

It is now one of the largest educational centers on funeral customs in the United States, with thousands of visitors each year learning about traditions and rituals from cultures all over the world.

One of the biggest exhibits is Celebrating the Lives and Deaths of the Popes. The museum worked with the Vatican to build the unique collection, including original uniforms worn by the Swiss Guard and clothing from a tailor shop in Rome that has outfitted the last seven Popes.

Museum president Genevieve Keeney said, "Death is a part of life. Death will happen to each and every one of us. We've been exposed to death more in the last couple of years due to COVID. Its where we all end up. So it's not a morbid subject. It's more of a journey of our next step in life."
Report a correction or typo
Related topics:
houstoneducationhoustonmuseum exhibitpopektrkfunerallocalish
LOCALISH
South Philly cleaners keep Eagles looking sharp
Meet Trey Brown, a 15-year-old fashion entrepreneur
Hairapy Salon offers sensory-friendly cuts to kids with special needs
Teacher and his therapy dog bring comfort to all ages
TOP STORIES
Daylight shows home destroyed after standoff with shooting suspect
What we know about man accused of shooting 3 HPD officers
5 people charged in connection with Pct. 5 corporal's murder
Driver dies after slamming into 18-wheeler's trailer on US-59
Woman shot in the shoulder during robbery set up in SW Houston
Prepare for a major closure at I-69 and 610 West Loop this weekend
Officers escort body of corporal killed in ambush to funeral home
Show More
Clouds clearing today, sunny through the weekend with rain next week
ABC13 obtains HPD scanner traffic of chase that led to shootout
'Tiger King' Joe Exotic resentenced to 21 years in prison
10 injured in PA bridge collapse; human chain formed to help
Bayou Bistro and Bar owner killed in Texas City shooting
More TOP STORIES News