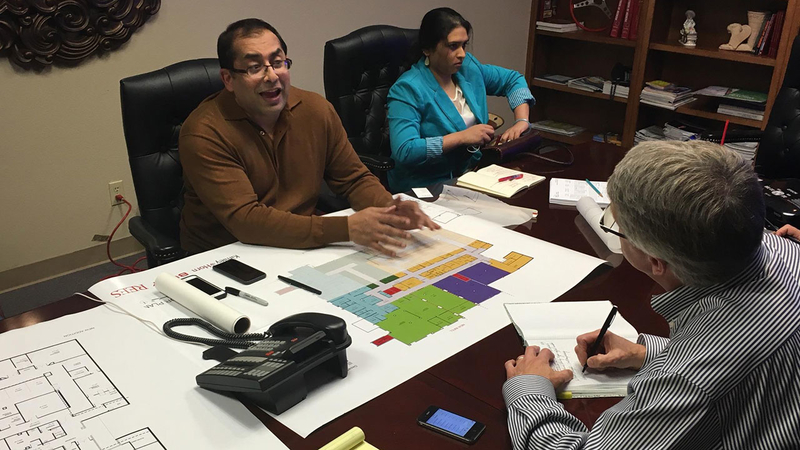 PARIS, TX (KTRK) -- A Muslim in small town Texas is defying the odd and has forever changed a community. Eyewitness News examines the changes the Pakistani native has brought to Paris, Texas.

Doctor AJ Hashmi knows he stands out in the town of Paris, Texas, a town of 25,000 people.

"I look different. I sound different," said Dr. AJ Hashmi, who has a Pakistani accent.

It's something residents of the small town have certainly noticed.

"A wealthy, Muslim, cardiologist, from the Middle East, is not the norm in Paris, Texas," said Paris resident Keith Flowers.

But Dr. Hashmi is not the norm by any standard. He's met two presidents, become a hero to countless patients, has treated former Pakistani President Pervez Musharraf and then, one day, decided he wanted to do more.

He told his friends he could help the people of Paris and was going to run for city council. Hashmi said they told him, that may not be the best idea.

"They thought I was crazy," laughed Hashmi.

The Muslim American started campaigning door-to-door, not everyone was receptive. Hashmi's friend, Keith Flowers, helped in the effort.

"Did we have some pushback saying, 'Well, you know his religion is different. He's not from here.' We got some of that," said Flowers.

However, Hashmi did not back down or give up. Instead, he spoke to concerned votes and told them why he was the candidate for the job. Months later, Hashmi beat out the incumbent. Now, he's the town's mayor. It's an honor the successful man said he can't put into words.

"Five, six, seven people can like you, but then hundreds of people support you, that's a great feeling," said Hashmi.

"He's been a savior to the city, just like he has to people who may come into our local hospital with a heart attack," said Flowers.

Now the doctor is saving another town. When nearby Clarksville lost its only hospital, Dr. Hashmi bought it. He's completely renovating the 50-patient-room facility. The hospital is set to be complete this fall.

Hashmi's term as mayor ends in May. He did not tell us what he has planned next, but no matter what it is, he's up for the challenge.

"The thing about it is, there are challenges in everything and I'm not afraid of picking up the challenges and addressing them," said Hashmi.
Related topics:
societyreligiontexas newsislam
Copyright © 2022 KTRK-TV. All Rights Reserved.
TOP STORIES
Texas man said it was 'time to kill' election worker, records say
Laundrie claimed responsibility for Petito's death in notebook: FBI
Bundle up! Clear and cold night ahead
Nation's largest abortion protest could be last under Roe
Bodies of 2 men found in apparent murder-suicide, HPD says
2 shot, 1 hit in head during home invasion on Houston's East End
Driver plows into hydrant, leading to NW Houston main break
Show More
Is is too late for the Ike Dike to be built?
Missing woman's cold case solved after car pulled from Brazos River
US confirmed 1st COVID case 2 years ago today
Police looking for 28-year-old in connection with teen's abduction
High school student attacked in his family's driveway in Richmond
More TOP STORIES News