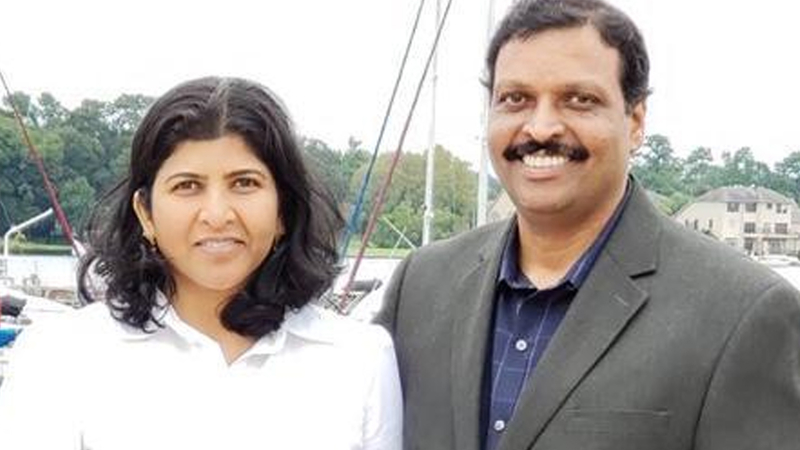 Officers were called to the house in the 1200 block of Pendergrass Trail just after 6 a.m. Monday.

Police say they arrived and found a woman, who was later identified as Shanti Nakirekanti, 46, dead in the driveway. She had been shot in the head.

When they entered the home, they found a man, who was later identified as Sreenivas Nakirekanti, 51, dead from an apparent self-inflicted gunshot wound to the chest. His body was in the bedroom with a small handgun nearby.

Please don’t be afraid to ask for help. This is a photo of Shanti & Sreenivas Nakirekanti. Police say the husband shot his wife to death on Monday before turning the gun on himself. Their 16 year old daughter was home at the time. Details here -> https://t.co/0NYNJKW6Y5. #abc13 pic.twitter.com/XVCvTJNWiI

Police say it appears a father shot his wife to death before killing himself at their Sugar Land home.

The man and woman were married, according to police.

Officials say the man called 911, gave officers the home address and hung up.

Authorities told ABC13 a 16-year-old girl was asleep in the home at the time of the shooting. She answered the door for police when they arrived and told them her dad was not coming out of the bedroom.

#BREAKING - Police say it appears a father shot his wife to death before turning the gun on himself. We’re following the latest on a murder-suicide in Sugar Land, Texas. Details as we get them -> https://t.co/0NYNJKW6Y5. #abc13 #hounews pic.twitter.com/Bvg9PxCd5b

"You just never know what's going on inside of a house until you get into it, so we're going to make sure we do our investigation properly and get all the facts," said Chief Eric Robins with the Sugar Land Police Department.

Friends say Sreenivas sent emails out Monday morning alluding to something bad. Those emails have been turned over to police.

The murder-suicide is under investigation.

Meanwhile, NRG told us Sreenivas is one of its employees.

On Thursday, the Nakirekanti family released a statement about the couple:

We are deeply saddened by the sudden death of Shanti and Sreenivas Nakirekanti. Their children are safe and are being taken care of by close friends and family. Both Shanti and Sreenivas are highly regarded and loved by their friends, relatives, neighbors, and co-workers. They were actively involved in volunteering activities and truly believed in giving back to the community.

"We are still unable to come to terms with the events that may have led to their untimely death. Currently, our priority is to take care of the well-being of their children. We are working on determining the date to perform the last rites. Plans are underway to bring parents of the deceased from India to attend the event. We are requesting privacy while the authorities complete their investigation. Please keep the family in your thoughts and prayers," added a close relative.

The apparent murder-suicide is the latest act of domestic-related violence this month in the Houston area: