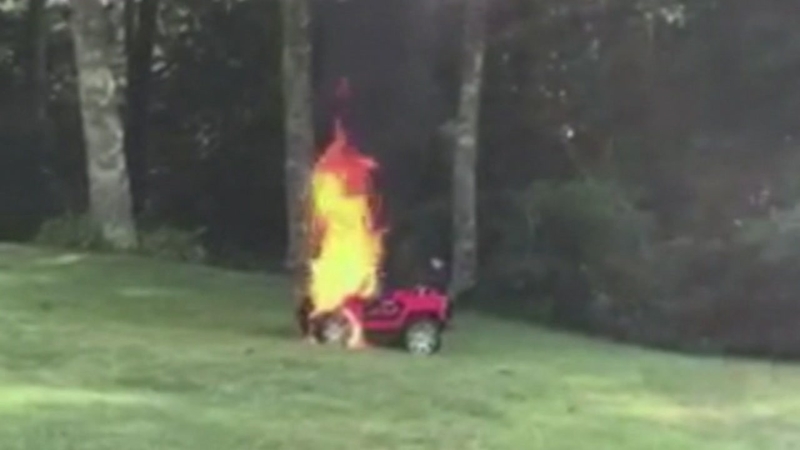 NORTH ANDOVER< Massachusetts (KTRK) -- A Massachusetts mother saved her two kids lives after she pulled them out of a toy car moments before it went up in flames.

"I think that was the really scary thing because they were buckled in and they are both little, so neither of them could have gotten themselves out," mother Michelle Kline said.

Kline says she was only feet away from her children when she started smelling something burning.

"It was just that hot electrical smell and I saw some smoke coming out of the little hood," Kline said.

The hero mom rushed over and got her 16-month-old and 3-year-old out of the vehicle.

The family reportedly purchased the $500 "Sportrax Awesome Xl Model" as a birthday gift for their 5-year-old and 3-year-old.

Kline says the manufacturer wouldn't talk to her, but spoke to fire inspectors about the incident.

"They did say to the fire inspector that they did put in a lot of fail-safes into the car to sort of protect people from this happening, which is again, part of the reason why we did purchase this car," Kline said.

Fire chief Bill McCarthy says it appears the fire started near the batteries, but it's hard to tell because the entire car was destroyed.

The department notified the Consumers Product Safety Commission, fire marshal, and the distributor and manufacturers.