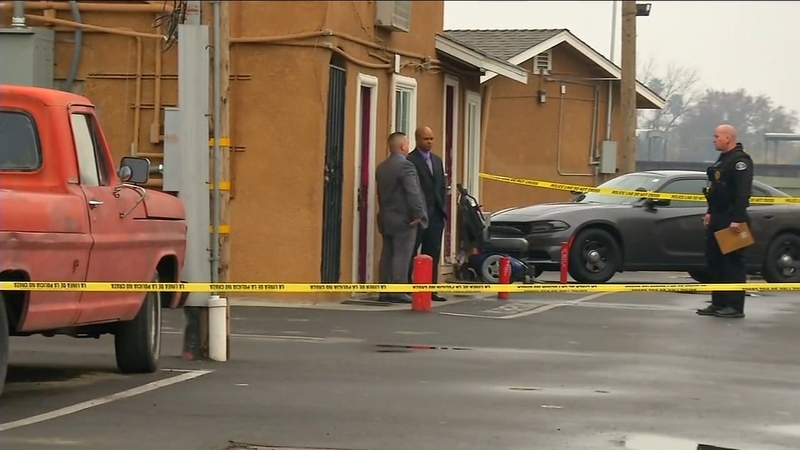 TULARE, California -- The mother of twin ten-month-old boys is facing murder charges after detectives say the infants died of an apparent drowning at the Virginia Motor Lodge motel in Tulare early Thursday.

"This morning about 7:45 the Tulare PD received a 911 call for a possible drowning of two infants. Officers were dispatched to the scene and immediately started rendering CPR," said Sergeant Jon Hamlin of the Tulare Police Department.

The twins were taken by ambulance to a local hospital where they ultimately passed away.

"The mother who was on scene was taken to the police department and questioned, and she's now been charged with the homicide of both the children," Hamlin added.

According to the owner of the motel, Heather Langdon checked in Wednesday night after officers discovered she and the babies were homeless.

Security video shows Langdon along with her twin boys being escorted to the property by Tulare Police just before 9 p.m.

"I donated that room and didn't worry about the money. I opened the door for them, and this morning it happened. The ambulance came, so I told them what happened," said motel owner Jay Bhakta.

Investigators are still looking into whether drugs or alcohol played a role in the deaths.

Police believe the boys were drowned inside in the motel room where they were staying.

"The pool here has been filled in, and they don't have any pools in the back so my guess would be the bathtub," Hamlin said.
Report a correction or typo
Related topics:
californiachild deathtulareinvestigation
Copyright © 2021 KFSN-TV. All Rights Reserved.
CHILD DEATH
Boy had scars 'indicative of belt whippings' before death, report says
Mom speaks for first time since 5-year-old son found dead
4-year-old who died at hospital had severe trauma, HPD says
Trainer wants to be solution after 28 Houston teens killed so far
TOP STORIES
Biden signs bill to make Juneteenth a federal holiday
New memoir 'On Juneteenth' reflects on life in segregated Conroe
How Texas 'critical race theory' bill could impact teachers
Hurricane Center issues first forecast for Potential Storm Three in Gulf
Boy had scars 'indicative of belt whippings' before death, report says
Man charged in deadly 2011 assault of 85-year-old in Montrose area
How quick crime fighting uses tech to pinpoint shooting suspect
Show More
80-pound cannonball found in Houston could date back to Civil War
Meet Opal Lee, the grandmother of Juneteenth
Here's what will be closed or open for Juneteenth
Woman shot and killed while trying to flee carjackers, police say
MS-13 member gets 50 years in prison after teen found dead in park
More TOP STORIES News