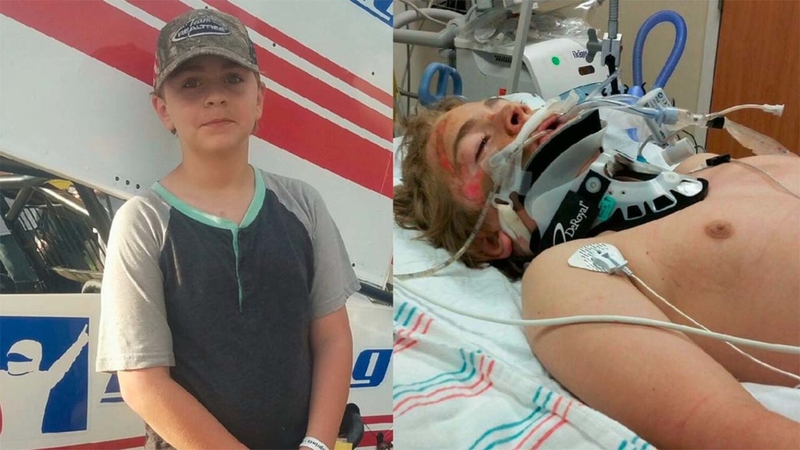 Witness: Young boy was "Drug under and spit out" from racecar

WILLIS, Texas (KTRK) -- An eyewitness said a driver should have gotten out of his race car to help a little boy. Morgan Harrod spent his 13th birthday recovering inside the pediatric intensive care unit at Memorial Hermann Hospital.

A race car driver struck Morgan at the Gator Motorplex in Willis last Thursday evening. He suffered a large gash to his head.

ORIGINAL STORY: Boy recovers after being hit by a race car

He said it was dark outside and a dark-colored race car hit Morgan.

"Got to the scene and he's bleeding ... really, really bad from the back of the head. A car just ran him over so it's really traumatic," said Vetter. "This was 100 percent an accident. The part I have a problem with is that the gentleman did not get out of the car and try to help the kid that he hit."

Vetter said crew members raced up to the driver, pushed him back to the pit, and he went about his business.

ABC13 spoke with the attorney representing Morgan and his family. Steve Waldman is with the Terry Bryant Law Firm. He said the complex should have had more safeguards in place to prevent the accident.

"Clearly, it was a hit and run," said Waldman. "When you find out that a 13-year-old child had over 20 staples in his head and spent over five days in the ICU at one of the major trauma hospitals in the country, I don't know how you call that anything other than a life-threatening injury. Fortunately, this child is going to survive. Hopefully, he will be okay."

Waldman said Gator Motorplex needed better lighting in the pits. They also needed staff to better direct attendees. He also said when attendees went to report the crash to on-scene paramedics, they weren't at their designated location.

Waldman said instead concerned guests had to turn on an ambulance's lights and sirens to get paramedics' attention.

The Willis Police Department responded to the incident. When reached by phone Monday afternoon, Chief James Nowak said there is no ongoing investigation. He said the wreck happened on private property. Nowak said the race car driver is not facing charges.

Eyewitness News reached out multiple times for comment from the driver. He did not respond to requests by phone, email, or on social media.

The owners of Gator Motorplex released the following statement though the World of Outlaws Craftsman Sprint Cars Series.

"Our thoughts and prayers are with the young man who was injured on Thursday night," said Randy and Theresa Waller, owners of Gator Motorplex. "The racing community is a close-knit one and everyone here at Gator Motorplex is thinking about the boy and his family. Thank you to everyone who has reached out and offered well wishes and prayers for the boy and his family."