Homeowner fights to keep tree from being destroyed in Montrose area 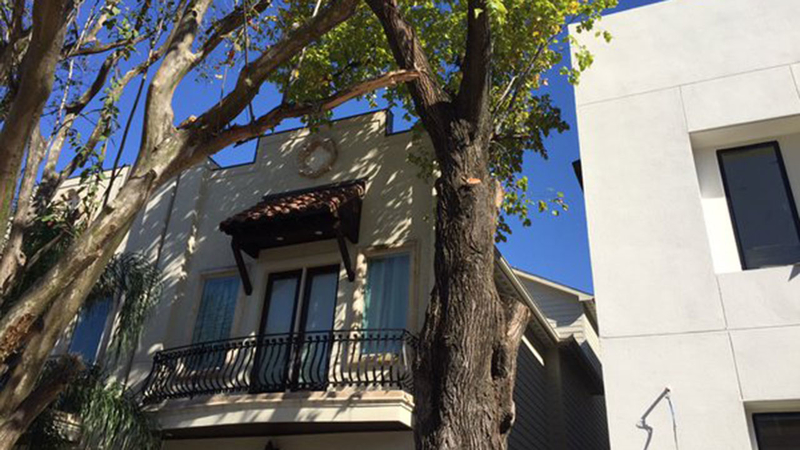 Homeowner fights to save tree

MONTROSE, TX (KTRK) -- An American elm has stood near the corner of Woodhead and Welch in Montrose for as long as 80 years. It's seen the neighborhood change, and now it's about to pay the price for new development on the street.

A large townhome is going through the last phase of construction, and the tree stands in the path of a planned concrete fence.

Neighbor Cindy Quatch is trying to stand in the way of the tree's destruction.

She awoke she says to the sound of chainsaws taking down a large limb that provided a green canopy in front of her balcony. "It was like my treehouse," she said. "No one informed me about this."

Quatch has a stake in the outcome. Part of the tree sits on her property. It's located not on city property, but on the other side of the sidewalk.

The builder, who told us by phone he had no comment on the issue, was granted a city permit to remove the tree. On the application, the diameter of the tree was listed as 20 inches by the applicant.

The head of Trees for Houston, which provides trees to make up for the loss of those lost to construction, said the diameter is at least twice that.

"If my measurements are correct," said Barry Ward, "that means the city may require mitigation- the builder would have to make up for the loss of this tree."

The city of Houston arborist who signed the permit has been contacted. He is the only person tasked with investigating tree removals in the entire city, and depends on accurate measurements being supplied on applications.

"There is nothing that can protect this tree," said Ward, "since it isn't on city property, but its loss will be significant to the look of the street." He doesn't believe regulations require neighbors to be notified of a tree removal.

And then there's the practical cost. For Quatch's home, he said her utility bills may increase by 4 per cent because of the loss of shade.

Quatch is a relator, who says it will affect her property value as well. "You just don't go around cutting down mature trees," she said. "There just aren't that many of them left."