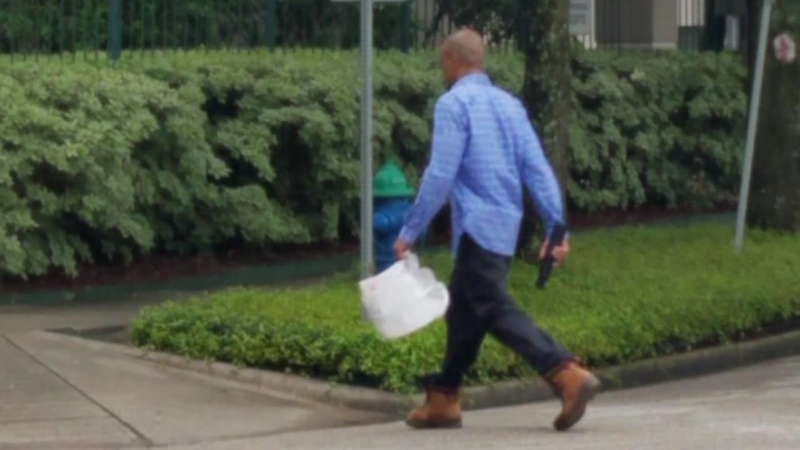 HOUSTON, Texas (KTRK) -- The search is on for the burglar in blue: a well-dressed man is believed to have broken into at least two homes in Montrose last Friday.

On Friday morning, Brandon Akridge was sound asleep in his garage apartment on Stratford, when his dog Cooper wouldn't stop barking.

Akridge's dog is rather mild-mannered. The rusty chef's knife apparently didn't seem that threatening either. Whatever, the reason, the man stood there for a moment, and made a run for it. In his hand was a bag of takeout food he grabbed from Akridge's refrigerator.

"I debated whether I should chase him or not, because he was so calm, maybe he had a gun or something," he said.

Akridge decided to jump into his truck and chase the suspect for a few blocks. He captured a few cell phone photos where the man can be seen holding the bag of takeout food and an umbrella. Later on in the day, Akridge found some surveillance video from a nearby law firm showing the man dressed in blue casually walking through the neighborhood.

What Akridge didn't know at the time was that just more than an hour later, the same man was captured on surveillance video a few blocks away on Kipling, leaving another house he apparently just burglarized.

Jim Cue, who lives with his wife and two dogs in the home on Kipling, noticed the burglary after he got home.

"I went to do laundry, and I looked through my backdoor, which I don't use very often, and I noticed mud and said, 'What's that?' I noticed that the door was busted open," recalled Cue, who then began looking around for missing items.

"He took my wife's triathlon bike and stole the front tires on the other one. Then, he took my work backpack and got electronics, and got another bag with some loose stuff and pedaled his way out," Cue said.

A neighbor's surveillance video captured the man leave Cue's house, but he left some clues behind.

"So he left the Gatorade bottle. Police have that as evidence, and he left his umbrella, and then stole a beer out of our fridge and drank half of it," he said.

Houston police investigators are gathering evidence, which includes the various surveillance videos. If you recognize the burglar in blue, please call authorities.