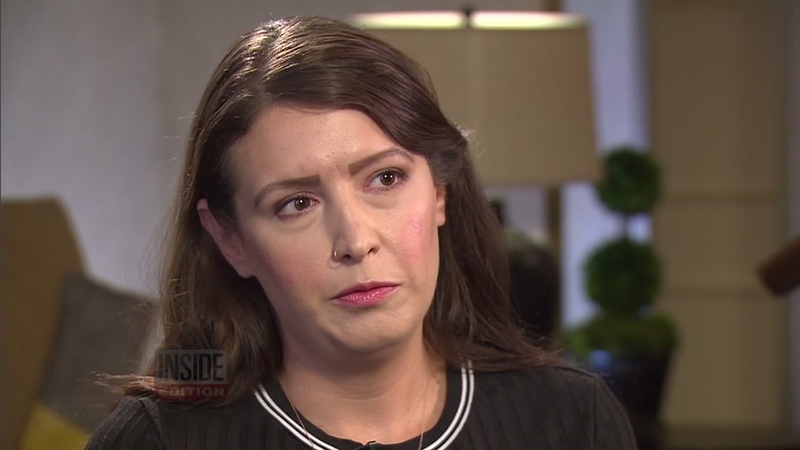 The Montgomery County woman who made national headlines after she was seen on video ringing a doorbell to ask for help has revealed her identity.

The mystery woman was identified as Lauren, during an interview with "Inside Edition."

Lauren, who did not want to share her last name, spoke previously to ABC13, but we kept her name and face out of the report at her request.

During her interview, Lauren revealed that night her boyfriend Dennis Collins had tied her up and raped her. She also explained how she ended up barefoot, wearing only a shirt and no pants, running to a neighbor's house for help to escape a desperate situation.

"My throat hurt really bad from screaming, so he let me go into the kitchen to get a drink. And while I was getting a drink, he turned around and walked to go to the bedroom, and that's when I ran out the front door," Lauren said.

She told "Inside Edition" she ran into her neighborhood and began ringing doorbells and tried to flag down cars, but no one stopped.

When neighbors didn't answer, investigators say she returned to the home where she and Collins had been living.

She managed to get to a friend's house where she then drove off to her family's home in Dallas.

Days later, Collins was found dead from suicide inside their home.

While on "Inside Edition" Lauren read a part of Collins' suicide note:

"I never would have killed you, as you thought. I'm sorry for what I've done, and I wish I could turn back time. Love, Dennis. Yes. Love. I'm sorry."

While she feels guilty about Collins' suicide, she says she feels the viral video actually saved her life.

Deputies say they are continuing their investigation, even though Dennis Collins killed himself.

Report a correction or typo
Related topics:
montgomery countysuicideinvestigationsurveillance video
Copyright © 2022 KTRK-TV. All Rights Reserved.
TOP STORIES
51-year-old on the run as suspect in corporal's ambush killing
Sergeant was to walk daughter down aisle until his hit-and-run death
Drying out but staying cool this week
Texas among states suing Google over claim it's misleading consumers
Man accused of stabbing K-9 in The Heights now charged
'We knew something big exploded': ABC13 recalls moment of Watson blast
2 adults killed and 12-year-old hurt in crash with speeding tow truck
Show More
Dad charged and fired from job after racist tirade posted on TikTok
Bad Bunny announces stadium tour stop at Minute Maid Park
Here are your headliners set to perform for the BBQ Contest at NRG
5 tax changes that can boost your refund this year
Getting paid on Venmo or Cash App? New tax rule might apply to you
More TOP STORIES News