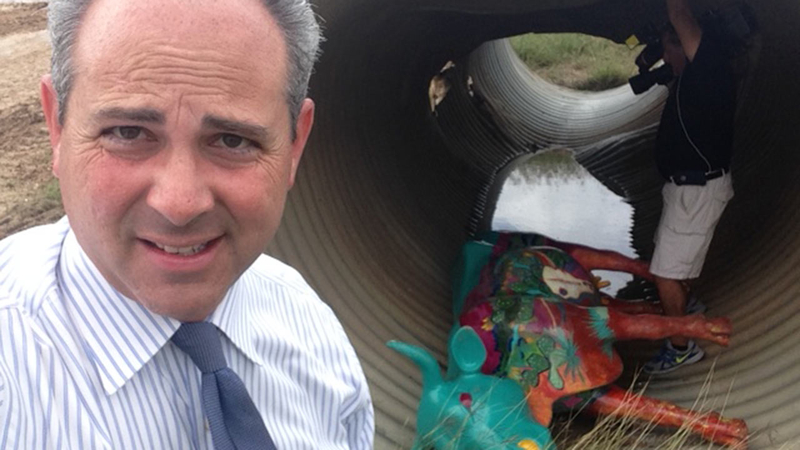 HOUSTON (KTRK) -- Police are looking for whoever stole a one-of-a-kind art cow from outside the Children's Museum of Houston overnight.

"Border Bovine" was a gift to the museum, purchased at auction for $50,000 by Duke Energy in 2001. It stood just behind the museum on Crawford street next to a similar cow, on display. 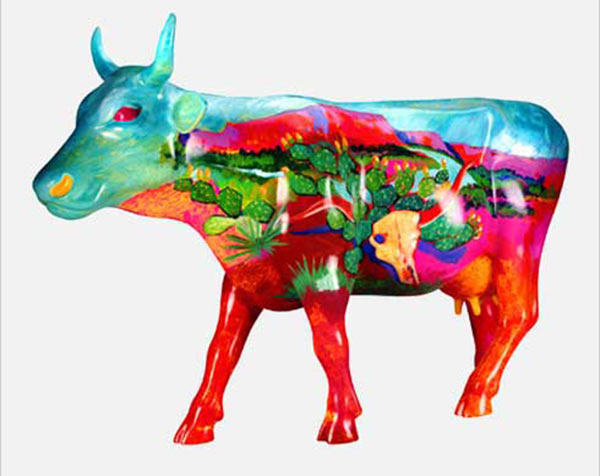 Workers noticed the statue missing Thursday morning around 7am. An alert was sent out to police and news media, requesting help in locating it. The museum even posted on its social medial sites in the hope that one of its followers might know something.

Around 9am, a Facebook follower posted that they saw what could have been the statue near the University of Houston off Spur 5 and Wheeler. Eyewitness News searched that location and located the cow, tucked inside a large piece of storm drainage pipe. Construction workers say they moved it there after they discovered it on the opposite side of the road. They told us they figured the statue simply fell off a vehicle and that if anybody really wanted it they'd be back for it. "Maybe somebody was driving fast, you know," said worker Rodolfo Rangel.

Named "Border Bovine" because of its South Texas motif painted on each side by a Swiss artist, museum officials say they're glad the statute wasn't irreparably harmed. "It's always frustrating if something gets stolen," said CMH director of facilities Pete Landcaster.

Once loaded up, you could see how someone ripped the hooves from securing bolts. Whether the theft was a prank or not museum officials say it means children were temporarily deprived of the joy the statue could bring.

"This is something that belongs to children in Houston. It brings great happiness. Please don't take her or anything that belongs really to all of us," said Children's Museum of Houston Executive Director Tammie Kahn.

The museum plans to increase safeguards which would help prevent another theft of the cow in the future. The statue will remain in safe keeping until those upgrades are implemented and it is fully repaired. Museum officials have filed a police report and hope someone will be identified and forced to take responsibility for the theft.
Related topics:
hobbies & interestshoustonarttheftstatuemuseums
Copyright © 2022 KTRK-TV. All Rights Reserved.
TOP STORIES
Winter returns after tonight's cold front passes
Baytown detective followed onto Highway 146 and shot at by 3 men
27-year-old accused of killing 19-year-old in Whataburger parking lot
Former HPD Chief Art Acevedo sues city of Miami after public firing
Texas AG Ken Paxton, who has fought vaccine mandates, contracts COVID
'Name a Roach' for your Valentine at this New York zoo
Boyfriend accused of shooting 15-year-old girl 22 times posts bond
Show More
Biden, 1 year in, says nation weary from COVID but in a better place
Starbucks no longer requiring US workers to be vaccinated
TX college students confront anxiety, as 5th pandemic semester begins
Pearland and Friendswood drainage projects continue in 2022
French actor Gaspard Ulliel dies after ski accident
More TOP STORIES News