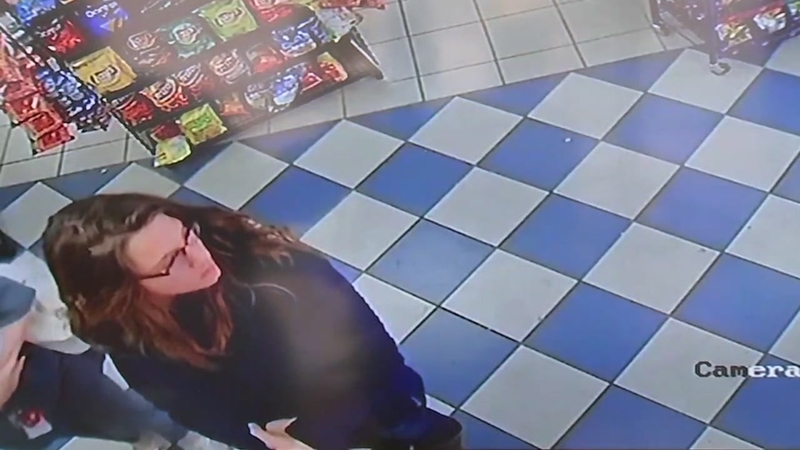 HOUSTON, Texas (KTRK) -- We now have an better idea on the timeline of when 13-year-old Ashlee Hattermann left for Laredo, possibly to meet a man she had been communicating with online in Mexico.

Eyewitness News obtained a copy of surveillance video from a Katy gas station that also sells Greyhound Bus tickets. It showed Ashlee with a Good Samaritan at the counter around 11:50 a.m. The clerk said the Good Samaritan purchased the ticket for Ashlee. Sources say the woman said Ashlee told her she was going back home to be with her family in Laredo, which authorities said was not the case. Instead, they believe she was going to meet someone in Mexico City.

Then the video shows Ashlee walking to board the bus around 4:40 that afternoon. Harris County Sheriff Ed Gonzalez said once Ashlee arrived in Laredo she walked across the border.

"On Friday she managed to arrive in Laredo and walk across the U.S.-Mexico border, which is scary in itself for a 13-year-old to be able to get that far," said Harris County Sheriff Ed Gonzalez.

Gonzalez said from there she went to Mexico City. They're not sure how she got there, but they believe she may have been trying to meet a man in his mid-twenties that she'd been communicating with.

"In June, the family had reported there was some improper online contact occurring between their daughter and some individual, possibly in Mexico. They were able to cut off the phone and internet service, but apparently this individual, as manipulative as they are, was able to furnish her with a phone or through other resources and was able to continue to communicate with her," said Gonzalez.

Authorities were able to locate Ashlee at a residence in Mexico City. As for the man they believe she was talking to, the sheriff does not believe he's been found.

"In many ways and so we're glad that this was what we consider to be a victory and being able to locate her," said Gonzalez.

Gonzalez said Ashlee Hattermann is still at the U.S. Embassy in Mexico working out logistics and is expected back by this week.

BREAKING: Ashlee Hattermann, 13, has been found safe in Mexico with cooperation from authorities there. Thank you @FBISanAntonio and all who helped in this search. #hounews