Protesters to Minneapolis officers after Houston man dies: 'He begged you for his life' 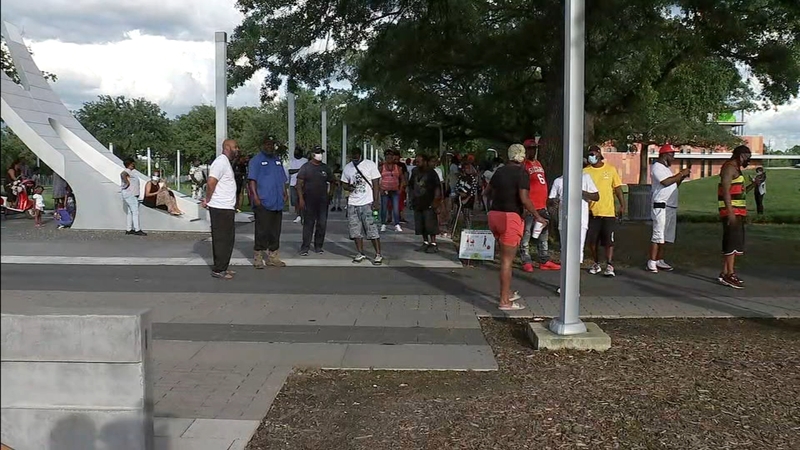 HOUSTON, Texas (KTRK) -- More than a hundred people gathered at Emancipation Park in the Third Ward on Tuesday and called for justice after a Houston man was seen on video pleading that he could not breathe as a white officer knelt on his neck during an arrest in Minneapolis.

The man who died, George Floyd, grew up in Houston and went to Jack Yates High School, where he played football. ABC13 found video in the archives of Floyd scoring a touchdown in 1992.

VIEWER DISCRETION ADVISED: The video that was shared online shows the man pleading that he couldn't breathe while bystanders demand the cop move his knee.

"He begged you for his life," one protestor said to ABC13 Tuesday night as a message to the officers. "If you can stand there and listen to another human being beg you for their life, and you continue to do harm to them, you're inhumane."

The gathering included chants, prayers and a back-and-forth with HPD Executive Assistant Chief Troy Finner, who engaged the crowd. Dozens of people came out to support protesters in Minneapolis.

They are calling for murder charges for the police officers who were involved.

Floyd's friends said he moved to Minneapolis four to five years ago for job opportunities. The Yates High School Alumni group on Facebook reacted to his death and to the hard-to-watch video.

Milton Carney lived with Floyd and his family during high school and kept in touch with him.

"I don't know how this here happened," Carney said. "He was in the best part of his life right now. He was murdered."

The Houston chapter of the NAACP said they stand in solidarity with the Minneapolis branch and Floyd's family.