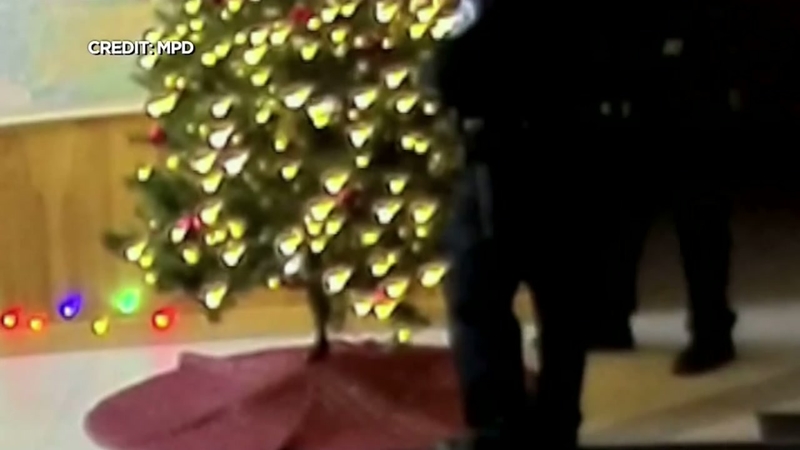 MINNEAPOLIS, Minnesota (KTRK) -- In November, the actions of two Minneapolis police officers sparked harsh backlash in the name of Christmas. Now the city's police department has released video of the incident, and that has stirred emotions all over again.

From a distance, it appears to be an innocent holiday moment - two officers decorating the 4th Precinct tree. But a closer look shows instead of tinsel, they used crime tape. Instead of an ornament, a Popeye's chicken cup.

"Seeing the alcohol and the nicotine, and all of these things that have been thrown in the black community that are harming our community is not representative of us," Minneapolis NAACP President Leslie Redmond told WCCO.

She calls the new video "affirming."

"Again it was disheartening but not shocking. It just reiterates the disregard that the police department and the city of Minneapolis has for the black community," Redmond said.

She said she was most surprised to see what appears to be an officer capturing the moment.

"The fact that they were proud of their actions, they were taking photographs as if it was a trophy," Redmond said.

A spokesperson for Minneapolis Police Department says this investigation is open and they can't comment specifically. They did say the reason they released the video was for transparency and don't believe it will interfere with the investigation.

Now there is a new tree out front. Neighbors put it up in unity on Friday.

The two officers are on paid leave and their boss was removed from his job.

"I think it was necessary, it needed to happen, but that's the bare minimum. We have a lot of work to continue to do," Redmond said.
Report a correction or typo
Related topics:
societyminnesotaracismu.s. & worldpolice
Copyright © 2022 KTRK-TV. All Rights Reserved.
TOP STORIES
3 officers shot near downtown Houston, police say
Man arrested in corporal's murder is 25-year fugitive, officials say
Deputies escort body of fallen HCSO Sgt. to funeral home
Another cold front passes through tonight
Biden confirms he will nominate first Black woman to SCOTUS
Toddler credited with saving family of 7 from devastating house fire
K9 stabbing suspect accused of killing father with dumbbell
Show More
Amy Schneider's 'Jeopardy!' accomplishments reach past podium
Armed driver was trying to rob another driver on Katy Fwy, police say
These jobs are hiring, and they pay more than $14 an hour
No bond granted for suspect in Pct. 5 corporal ambush killing
Bodycam video released in crash that killed 75-year-old
More TOP STORIES News