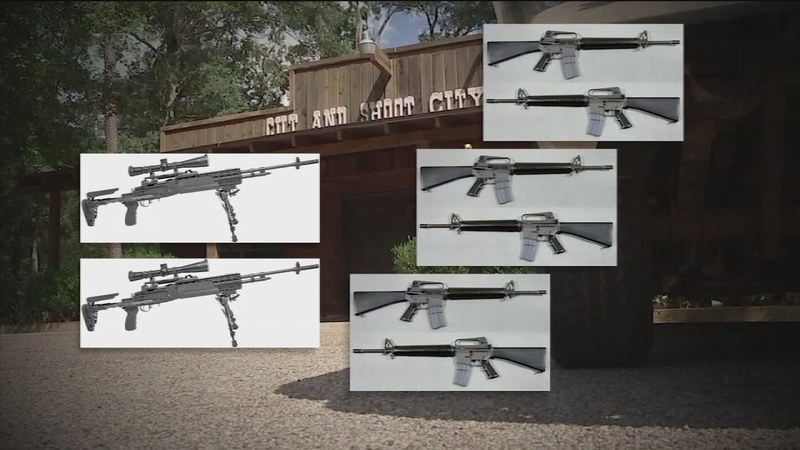 HOUSTON (KTRK) -- Over the last four years Texas police departments received 206,000 pieces of gear from the military, including 1,805 military rifles.

In our area,102 military rifles are spread among eight departments, records show.

Even Rice University's police department has an M-16 at the ready, thanks to a Pentagon program that supplies surplus military gear to civilian police to the tune of $1 billion worth of equipment each year across the US.

A spotlight has been glaring on the program in the wake of the police response to protests in Ferguson, Mo., where police, armed with assault weapons and mine-resistant vehicles, appeared more ready for an invasion rather than walking the beat.

And in a U.S. Senate hearing convened Tuesday to probe "police militarization," lawmakers and witnesses suggested the program supplying the surplus to local cops is out of control and has little federal oversight.

There is at least some evidence of a lack of oversight nationwide for the program, known as the Department of Defense's 10-33 program.

The Pentagon suspended three entire states, Alabama, North Carolina and Minnesota, for failure to comply with the program's annual inventory requirements, according to one investigation. In addition, 146 individual law enforcement agencies in 36 states have been suspended since 2007.

There have been problems in Texas, too.

The Ennis and Wells police departments are on the program's suspension list, as well as the Hidalgo County Sheriff's Office, records show.

And the police chief of Rising Star, a town smaller than West University about 50 miles southeast of Abilene, was indicted in February for selling and pawning $4 million worth of military equipment his department got through the program, including an M-14 machine gun.

But an ABC-13 review of the program shows the reality may be slightly different than simple "police militarization."

The vast majority of the equipment flowing to police departments in our region is not weaponry. 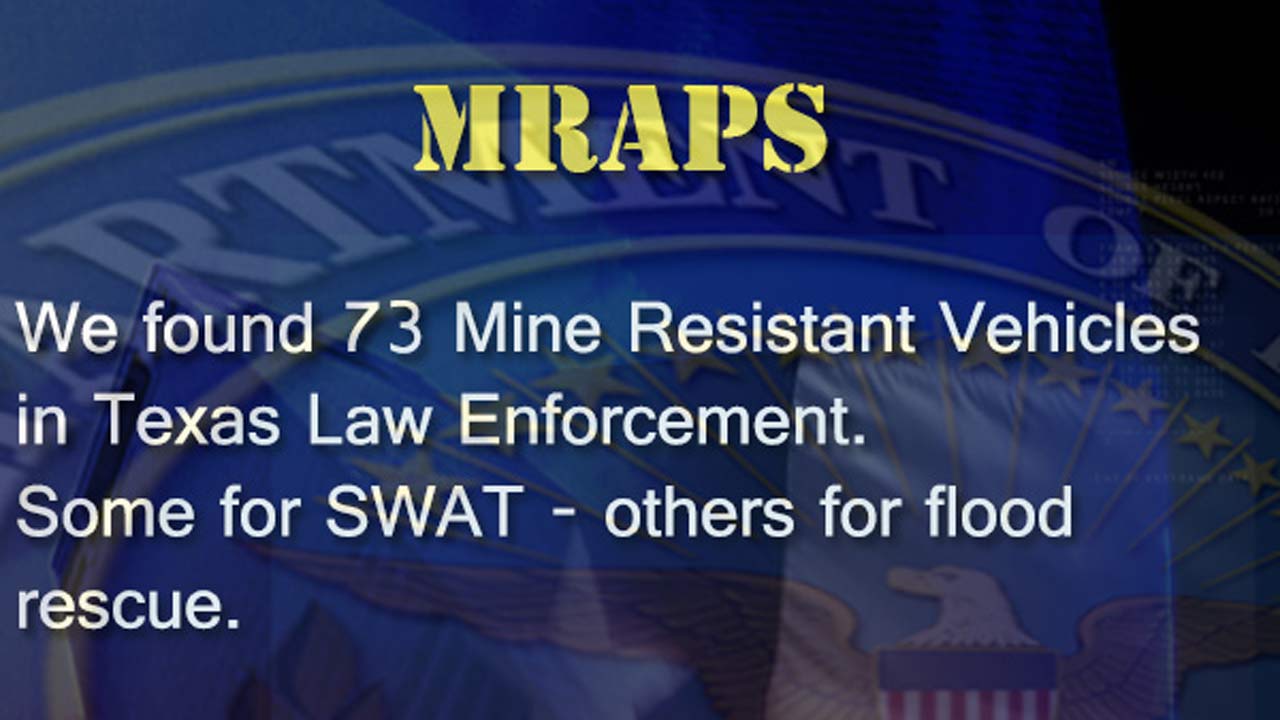 The Pentagon’s military gear in Texas police departments
You may be surprised to see what kind of gear is being utilized by police, and who is getting the guns

For example, the Houston Police Department has $11.5 million dollars worth of former military gear in its inventory, including a Boeing 737 shell used by the SWAT team for training.

Also available for Houston cops: 2,100 safety goggles and 278 cold weather, snow camouflaged parkas. (Police say the parkas are not for a possible freak blizzard, but rather, for K-9 police dog training.)

Tomball Police have 44 flyer's helmets and 40 visors for a single gyro-plane the department uses for surveillance.

The Harris County Sheriff received 1,000 belts for his deputies through the program, as well as traffic cones and lights to better illuminate nighttime crime scenes or accidents.

"It's not all G.I. Joe stuff," said Chief Armando Tello with the Harris County Sheriff's Office. "Some of it is day-to-day operations."

Other clear takeaways from our investigation:

Much of this is civilian style gear the feds already paid for and if it didn't get a new use in a police department it would likely be scrapped by a military no longer fighting two wars; and

Police may be getting more militarized, but it's not necessarily due to the 10-33 program. Many police departments, including Houston Police and the Harris County Sheriff's Office, have tactical weapons paid for with local tax dollars, not shipped via the Pentagon.

To be sure, there certainly is some larger military-style equipment on the list. In New Caney, Montgomery County Precinct 4 Constable Rowdy Hayden has a $700,000 mine resistant vehicle.

It's first use since protecting soldiers from land mines in a war zone, will be to deliver school supplies to needy kids in a few weeks. It will then be put in service for high water rescue, Hayden said.

And the Fort Bend County Sheriff's Office just received two Kiowa Warrior helicopters from the army, where their wartime role was to provide armed reconnaissance to support ground troops.

One of the helicopters will be flown by sheriff's deputies and the other will be used for parts.

"When this aircraft is painted, you won't be able to tell it was part of the US Army arsenal," Sheriff Troy Nehls said.

Indeed, stripped of it's weaponry, it's virtually the same helicopter you know as our own ABC-13 Sky-Eye, which flies in to report on real-time on traffic snarls and police chases.

Nehls says he understands the concern some might have about the program nationwide and says he welcomes additional oversight being considered in Washington.

"I think maybe a little more oversight will ease the tensions and fears people have," he said.

The two helicopters are the only items Nehls has from the program.

"I don't feel the need to ask the military for small arms," he said.

Not everyone feels the same way.

Cut and Shoot, a city of around 1,200 that has a police department with two full-time officers has eight military rifles from the program, two M-14's and six M-16s.

Why did Chief Arnie Schulze request such an arsenal?

Plus: "Different guns, different applications. More of the same type of gun to me is spare parts I don't have to buy."

He carries one of each kind in his squad car and doesn't make any excuses for having them while on patrol in his rural municipality.

"Backup is a long way off," Schulze said.

He's never had to use them. Except once.

"We had one bovine execution." Schulze said. A cow was injured and the owner "needed it put down."

Here is a list of all the M-16s given to law enforcement agencies in Texas.

Here is a list of all the M-14s given to law enforcement agencies in Texas.

Here is a list of all mine-resistant vehicles given to law enforcement agencies in Texas.