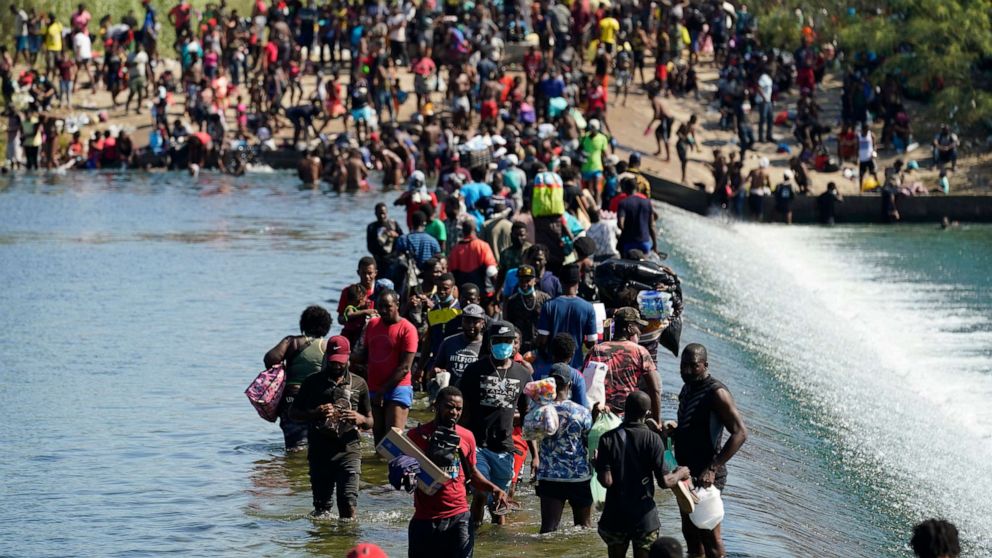 As the Biden administration continues to grapple with a surge of Haitian migrants on the border, images have surfaced showing the tactics used by the U.S. Border Patrol agents riding horses to control the crowd around the river.

Video from news outlets Reuters and Al Jazeera appear to show a Border Patrol agent as he snaps his horse's reins in the direction of a migrant who then stumbles back into the Rio Grande. But it's unclear from the video if the agent was simply using his reins to control the horse and prevent it from falling into the water. The agent is seen repeatedly pacing back and forth across the river entrance on horseback.

Department of Homeland Security Secretary Alejandro Mayorkas said Monday that the department is investigating the incident and will respond if needed. At a press conference Monday afternoon, Border Patrol Chief Raul Ortiz defended the use of horseback patrol as a vital tool for law enforcement to maintain visibility in hard-to-reach areas of the border.

"The horse patrol units down here are going to play an integral role in the security response," Ortiz said.

"So it's important that the Border Patrol agents maintain a level of security for themselves and for the migrant population," he added.

Later on Monday a spokesperson for the Department of Homeland Security said the Customs and Border Protection's Office of Professional Responsibility is investigating the incident and had alerted an independent federal watchdog.

"The footage is extremely troubling and the facts learned from the full investigation, which will be conducted swiftly, will define the appropriate disciplinary actions to be taken," the spokesperson said.

Mayorkas traveled to Del Rio, Texas, where more than 14,000 migrants surged the border over the past week, to make assurances that the Biden administration has the situation under control and to warn migrants on the other side not to cross illegally. About 10,400 migrants are currently at the encampment, according to official updates provided to local authorities in Del Rio.

"We have reiterated that our borders are not open and people should not make the dangerous journey," Mayorkas said at a press conference Monday.

The secretary provided few new details about how the federal government was responding to the efforts. He did however note the surge in resources that have been brought to the area in an effort to process those who have arrived.

Specifically, Mayorkas said, the U.S. would use at least one to three flights per day to remove migrants who the government says did not have a valid claim to stay in the U.S. A source familiar with the plans said as many as seven flights per day could be used.

"If additional staff is needed, more will be sent," Mayorkas said.

DHS has even asked the Pentagon for help in securing additional air travel for the migrants. Aircraft under contract with the military, not military planes themselves, would be used and refunded by homeland security.

Large groups of migrants left Haiti for South America between 2010 and 2012 after a massive earthquake devastated the country. Many arriving now in Texas have not lived in Haiti in about a decade. Mexico has also seen a surge in asylum applications from Haitian nationals with about 13,000 filed this past year, according to the Migration Policy Institute.

The majority of those crossing continue to face removal under a part of U.S. federal law known as Title 42, which the administration has used to restrict migration in the name of public health. Immigrant advocates have called the use of the public health order a violation of the humanitarian protections that migrants are due.

"Local groups, faith-based institutions, universities, businesses and entire communities have shown greater leadership in welcoming refugees than any we have seen from the White House in recent years," Amnesty International USA Executive Director Paul O'Brien said in a statement Monday. "The U.S. can and we must do better."

The administration is also considering a request from Texas Gov. Greg Abbott that President Joe Biden declare an emergency in the state. A disaster declaration would allow for additional federal assistance for the already strained official presence in the area.