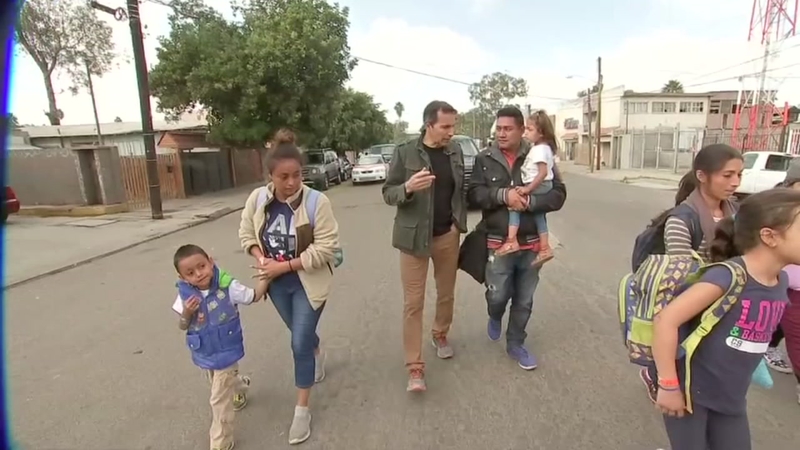 TIJUANA, Mexico -- Officials in the Mexican border city of Tijuana said they have arrested 34 members of the caravan of Central American migrants for minor offenses and turned them over for deportation.

A Tijuana city statement late Monday said the 34 - apparently all men - were arrested for drug possession, public intoxication, disturbing the peace and resisting police, and added they would be deported to their home countries. The main caravan has between 4,000 and 6,000 participants, so those arrested represent less than 1 percent of the total.

Tijuana Mayor Juan Manuel Gastelum has made a point of saying the city is not comfortable with the caravan that began arriving last week, and he compared the Central American group unfavorably with about 3,000 Haitians who ended up in this city bordering San Diego on a failed bid to reach the United States last year.

"The Haitians arrived with their papers, with a clear vision," Gastelum said in an interview posted on the city's Facebook page. They came "in an orderly way, they never asked us for food or shelter," renting apartments and making their own food. He said the Haitians found jobs and "inserted themselves in the city's economy" and had not been involved in any disturbances.

The Mexican government gave the Haitians temporary transit permits, and after they failed in attempts to enter the United States, many have since applied for Mexican residency. The majority in the Central American caravan have refused Mexico's repeated offers of residency or asylum, and vowed to cross the border.

The caravan of Central Americans, he said "had arrived all of sudden, with a lot of people - not all ... but a lot - were aggressive and cocky."

Trump administration officials, who have portrayed the migrant caravans as a threat to the United States, have said there were as many as 500 criminals in the groups heading northward, but they haven't said what the crimes were and said they could not reveal the source of the number because they were protecting intelligence sources.

Some local police and residents have expressed concern that portraying the caravan as criminals has tarred its innocent members and exposed them to reprisals.

Some of the largely Honduran migrant group were frightened over the weekend when about 500 people in an affluent district of Tijuana staged angry protests against the caravan. Dozens of the more radical protesters then marched to an outdoor sports complex near downtown where 2,500 migrants are staying, sleeping on dirt fields and under bleachers.

SEE ALSO: ABC13's Art Rascon follows a family of 10 as they leave the migrant caravan and walk to border
EMBED More News Videos

Another Tijuana police officer, Victor Coronel, who has overseen security outside the sports complex where the migrants are staying, said local fears are based on the bad behavior of only a handful of migrants.

Mexico's ambassador to the U.S., Geronimo Gutierrez, told reporters Monday that the situation is a "wake-up call" for the U.S., Mexico and Central America, and could force the region to work together to address the issue of immigration.

U.S. border inspectors are processing only about 100 asylum claims a day at Tijuana's main crossing to San Diego, and there was already a waiting list of 3,000 when the new migrants arrived, so most will have to wait months to even be considered for asylum.

Gastelum, appealing for greater federal help to copy with what he called an "avalanche" of migrants, estimated they would be in Tijuana for at least six months while waiting to file asylum claims.

For most people in this city of 1.6 million, the arrival of thousands of Central Americans is not noticeable. Most of the migrants stay within a three-block radius of the sports complex that faces the towering metal walls topped with barbed wire at the U.S.-Mexico border.

But the United States has dramatically increased security at ports of entry in preparation for the caravan, placing cement barriers topped with razor wire that can be quickly moved to block passage if a mass of migrants to try to force their way into the country.