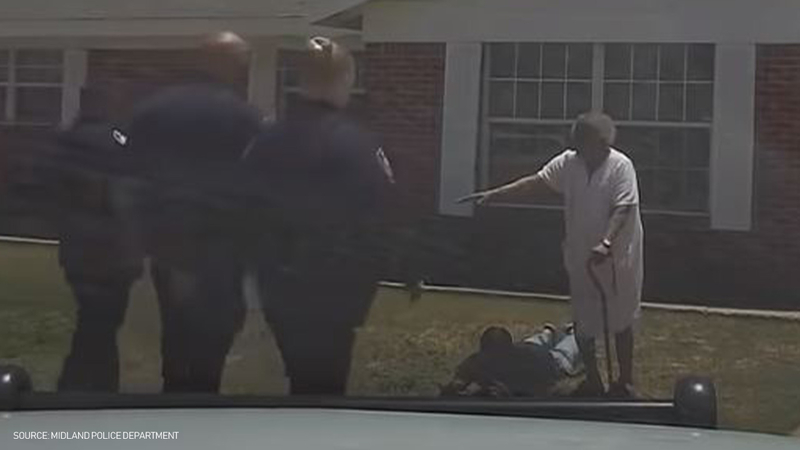 MIDLAND, Texas (KTRK) -- Dramatic video shows a 90-year-old grandmother attempting to shield her grandson from officers seen with their weapons drawn after he reportedly drove through a stop sign.

Police said on May 16, officers tried pulling over Tye Anderson of Midland for failing to stop at a stop sign.

Anderson continued driving, according to police. Investigators said once Anderson pulled over, officers repeatedly asked him to get out of his vehicle.

"The suspect refused to cooperate with officers," read a statement from Midland police released on Wednesday. "Upon exiting the vehicle, officers advised the subject to walk towards them to be detained. The subject then stopped and laid on the ground. During that time an elderly female walked towards the subject and stood next to him."

In the video, the grandmother is seen standing next to Anderson with her hand out. She then suddenly falls to the ground. Anderson was arrested for evading arrest and was booked into the Midland County Jail.

Meanwhile, a town hall meeting has been scheduled for Thursday, May 28 in Midland regarding the incident.

Attorney Justin Moore told ABC News his client is facing charges of evading arrest although, according to the lawyer, the police didn't make it clear when that happened, whether it was before or after he ran the stop sign.

A court date has not been scheduled at this time.