Astros pull off something they haven't done since 1994 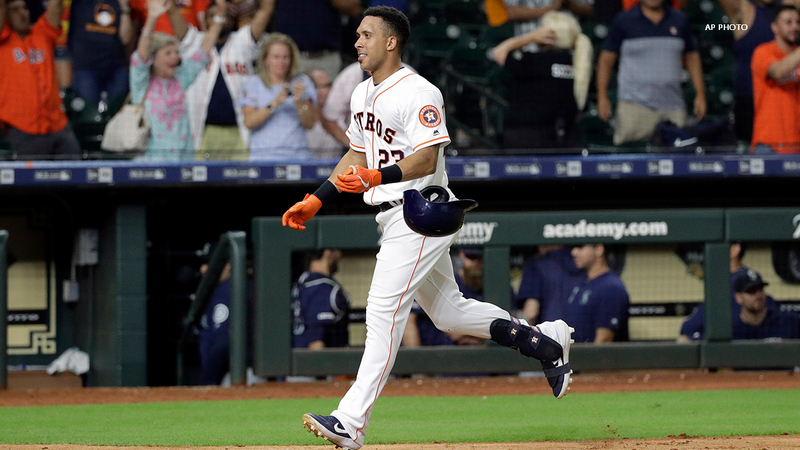 HOUSTON, Texas -- When the Houston Astros fell behind by seven runs in the second inning Thursday night, it would have been easy for them to starting looking ahead to their next game.

But for this team, with its eyes on a World Series championship, that was never even a thought.

"I think that's what makes a team special, a never-give-up attitude and we're always in every game, and we did that tonight," outfielder Michael Brantley said.

Brantley hit a two-run homer in the bottom of the 13th inning to give Houston an 11-9 comeback victory over the Seattle Mariners.

The win improved the Astros to 91-50, the best record in franchise history after 141 games, and 13-1 against the Mariners this year.

Houston rookie Kyle Tucker hit his first major league homer in the sixth and tied the score 9-all in the 12th with an RBI single. Josh Reddick also went deep and Jose Altuve had a two-run triple for the AL West leaders, who were down 7-0 in the second.

"We just hung in there, we kept chipping away, we got some big swings and we look up and we tied the game," manager AJ Hinch said. "We kept the game alive and ultimately the big swing at the end with Mike. A lot happened in that game and obviously it started out terribly for us but finished in dramatic fashion."

Kyle Seager homered twice, including a tiebreaking shot in the 12th, and rookie Aaron Nola had two home runs and five RBI for Seattle.

"A lot of good things, but unfortunately we couldn't shut the door," manager Scott Servais said.

Matt Wisler (3-4) walked Jake Marisnick leading off the 13th before Brantley launched a drive to right-center.

Josh James (5-0) struck out five in two innings for the win.

Seager connected off James with one out in the 12th to put the Mariners up 9-8.

"That's a championship team," Seager said. "That's why they are where they are and that's what they've done. They have a very good lineup and they grind. We were able to get a lead, but they keep battling, they chip and chip and chip, and there's not much of a letdown top to bottom there."

Yuli Gurriel walked with one out in the bottom of the 12th and was replaced by speedy pinch-runner Myles Straw. He advanced to second on a groundout before scoring on Tucker's single to tie it again.

James then struck out the side in the 13th.

The Mariners opened a 7-0 lead thanks largely to the worst start of the season by Wade Miley.

"They came in with a good game plan and they executed it and put us behind the 8-ball pretty early," Miley said. "They just had me today."

But the Astros chipped away by scoring one in the second, two in the third and two in the sixth. They trailed 8-5 in the eighth before Altuve hit a two-run triple off Sam Tuivailala. Brantley's sacrifice fly scored Altuve to tie it.

Dan Altavilla struck out the side in the ninth to send it to the 10th.

Neither team got a hit in the 10th or 11th before Seager's home run.

Nola hit a two-run double and Seager homered in a five-run first for Seattle. Miley gave up five hits and five runs without getting an out in the shortest start of his career.

Nola's first home run of the night came in the second to put Seattle up 7-0, and he added a solo shot in the seventh to make it 8-5.

Tucker, the fifth overall pick in the 2015 draft, hit his first career homer to cut the lead to three in the sixth. There was one out in the inning when Reddick chased Gonzales with a homer to right field to make it 7-5.

The Astros trimmed the deficit to 7-1 in the second when Yordan Alvarez scored on a wild pitch by Gonzales. The pitcher dashed from the mound to cover home plate and the throw was just short, allowing Alvarez to slide in safely.

Gonzales and Alvarez collided and the pitcher was shaken up, but stayed in the game after a short visit with trainers and a few warmup pitches.

Mariners: SS J.P. Crawford remained out with a strained hamstring, but Servais said Crawford was doing better and hopes to play again this season.

Astros: RHP Aaron Sanchez will have surgery on his pitching shoulder and miss the remainder of the season. ... All-Star OF George Springer was diagnosed with a mild concussion and will miss a few games. He is expected to return early next week.

Seager's big night gave him 21 homers, making him the first player in franchise history to have 20 or more in eight straight seasons.

"Unbelievable," Servais said. "Kyle has really found something, and good for him. He put in a lot of adjustments and effort and it's nice to see it paying off for him."

Mariners: Seattle will use an opener followed by LHP Tommy Milone when the series continues Friday. Milone will make his 14th appearance after striking out 46 in his first 13 outings this season.

Houston Astros outfielder George Springer was taken off the field Tuesday in Milwaukee after hitting his head on an outfield wall during a catch.