MFAH painting may have been stolen by Nazis 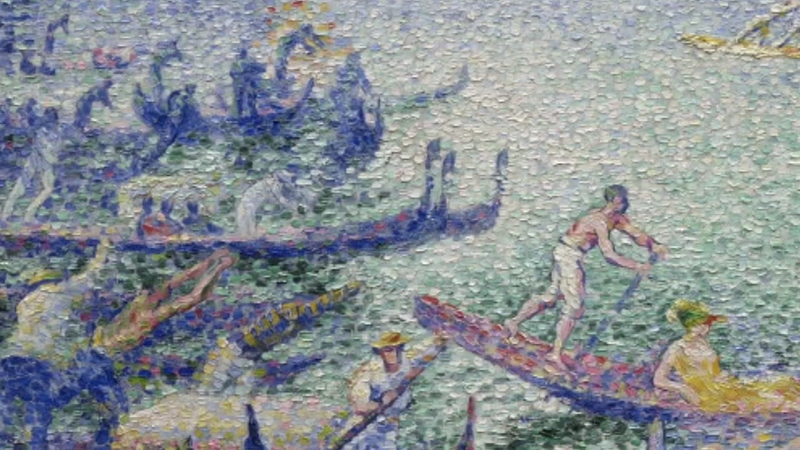 A painting from the Museum of Fine Arts, Houston was stolen

BERLIN, Germany -- The heirs of a Jewish collector say a painting from a Texas museum on loan in Germany was stolen from their family by the Nazis, and have filed a legal request for its return, a German newspaper reported Wednesday.

German daily Bild reported the unidentified heirs are claiming ownership of Henri-Edmond Cross's "Regatta in Venice" from 1903/04, which is currently on show at the Barberini Museum in Potsdam, near Berlin. The painting is on loan from the Museum of Fine Arts Houston.

The painting originally belonged to Jewish-French collector Gaston Levy, but was confiscated by the Nazis in 1940, said Christoph Partsch, a lawyer for the family.

"My clients found out only now about the existence of this long-missing painting and they demand its return," Partsch told The Associated Press.

The lawyer said the family lives in Europe, but didn't want to further identify them.

The Potsdam state court has given the Barberini Museum until next week to respond to their demand, Partsch said. The court on Wednesday afternoon confirmed that it had received a request for the return of the painting by two people whom it didn't further identify.

The Barberini Museum said it was in touch with the Houston museum and that both museums "see the clarification of the legitimate owner as an urgent obligation."

After the war, the painting surfaced in the United States where in 1958 it was donated to the Houston museum, the Barberini museum said.

"The question of provenance is especially important because Cross is an artist whose work has been forgotten in Germany due to confiscations by the Nazis from German collections as well," the museum said in a statement.

The impressionist work is painted with oil on canvas in the pointillism style and shows several gondolas on the water and the city line of Venice in the background.

The Museum of Fine Arts in Houston issued the following statement:

The Museum of Fine Arts, Houston recently received notice of a claim filed in Potsdam, Germany, with the Museum Barberini and dated January 21, 2019. The claim alleges that an MFAH painting on loan to the Museum Barberini- Regatta in Venice (1903/4) by Henri Edmond Cross-is the property of the heirs of French collector Gaston Lévy, some of whose artworks were confiscated by German officials in occupied France in 1940. The MFAH takes very seriously all questions of rightful ownership.
We have initiated a review of the matter; aspects of research to date contradict a number of the plaintiffs' assertions.
Report a correction or typo
Related topics:
houstontheftmuseumsnazisjewishpainting
Copyright © 2022 by The Associated Press. All Rights Reserved.
TOP STORIES
HCSO sergeant hit and killed by driver during escort, sheriff says
2 adults killed and 12-year-old hurt in crash with speeding tow truck
Suspect accused of killing Pct. 5 corporal still on the run
Grab the umbrella! Widespread showers move in Monday
Inside Texas hospital battling omicron: 'We're about to catch on fire'
Tax filing season starts Monday. What to expect for 2022
5 tax changes that can boost your refund this year
Show More
COVID-19 patient at center of ventilator fight dies in Texas
3-year-old drowns in pool in NW Harris County, sheriff says
Woman found in a ditch after a hit-and-run
Little York firefighters work to put out fire at N. Houston apartment
Former Houston Oiler takes over Prairie View A&M football
More TOP STORIES News