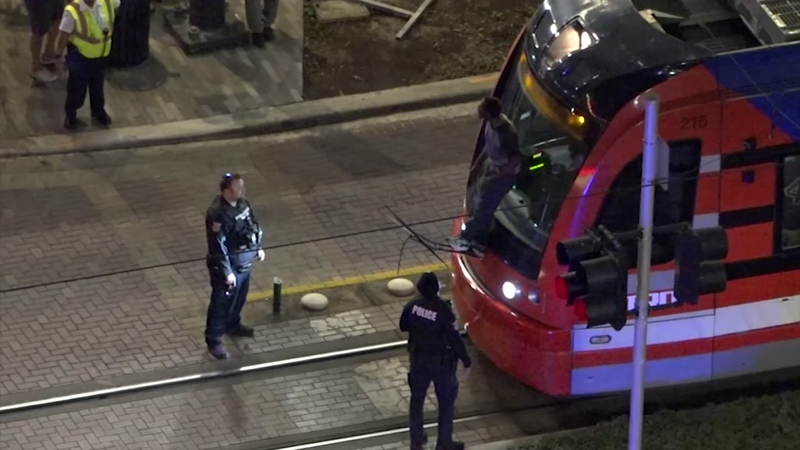 Crime on METRO platforms up double digits in last year

HOUSTON, Texas (KTRK) -- It was almost Christmas 2017 and part of the METRO train system was down.

Because of the service interruption, fare inspectors were supposed to be helping customers find shuttle buses or be manning part of the light rail platform.

Instead, more than a half dozen of them were nowhere to be found, METRO documents show. A Snapchat video would ultimately answer the puzzle: the group was taking a very extended lunch (some three or four hours long) at a nearby Buffalo Wild Wings and at least one had ordered drinks, those same documents reveal.

The Snapchat video starts in black, reading "They say the 1-9 shift don't do sh** & do what we want," followed by the next screen showing the group and the words, "& we don't" and more profanity.

Having eight fare inspectors off the job for an extended period is a problem, given that the entire system has only 45 and that's for all shifts, according to METRO Police Chief Vera Bumpers.

None of the eight involved in the Buffalo Wild Wings incident are still working for METRO, for one reason or another, Bumpers said.
"What we learned from that is maybe our deployment strategy with our civilian fare inspectors we needed to tweak, make some changes," Bumpers said.

Incidents like that and the prevalence of video of crimes on bus and rail platforms makes for a difficult challenge: fighting a perception that METRO isn't safe. It's not true, Bumpers said, but the perception hangs around.

Deborah Rafetto chose a home near the METRO system so she could easily get to and from the medical center for work. Then as she walked home one day last year, she was robbed.

"Someone jumped out with a mask on, pointed a gun at me and said, drop your bag," Raffetto said. She wasn't hurt, but her sense of safety was.

Her case was one of 20 robberies that month across the METRO system. Rail lines and platforms are particularly a hot spot for crime, according to the statistics.

Rafetto has tried since to get the attention of the METRO board and city council - speaking at both to try to create change.

What does she think the perception is?

"That the system is not safe," Bumpers said.

But Chief Bumpers acknowledges she is fighting perception maybe even more than reality. METRO cameras have captured crime time and time again, from assaults to robberies.

"We've made, just this month, several arrests because of our plain clothes initiative," Bumpers said.

Chief Bumpers acknowledges a rise in crime in the last fiscal year - ending in October. Serious crime, like assaults, is up slightly. Less serious crime, like drug charges or public drunkenness, is up 60 percent on the rail lines and platforms - where most crimes occur.

2019 numbers look much more promising amid new initiatives by the METRO police force.

How often should riders like Raffetto see uniformed METRO police?

If they're riding to and from work, they should expect to see somebody at least twice," Bumpers said.

But in the hundreds of trips Raffetto's made to and from the medical center: "I can't say I've ever seen any METRO police per se. I've seen fare inspectors."

"We are concerned," Bumpers said. "We do care."

"I just want to be a squeaky wheel," Raffetto said.

Deborah is convinced that by speaking up things will get better. She thinks they have - and the numbers back that up. But she worries it might be temporary.

"I feel safer," Raffetto said. "I'm encouraged by what I'm seeing right now, but what I don't want to happen is just like the cockroaches. We turn off the light and they come back because it's not just at one station. It's a problem along the whole system."

METRO wants riders to know and use any of the well publicized ways to contact police, even going so far as to have a way to text METRO's dispatch center in the middle of a transit crime so criminals don't know you're calling.

Search for MPD Connect in your phone's store.