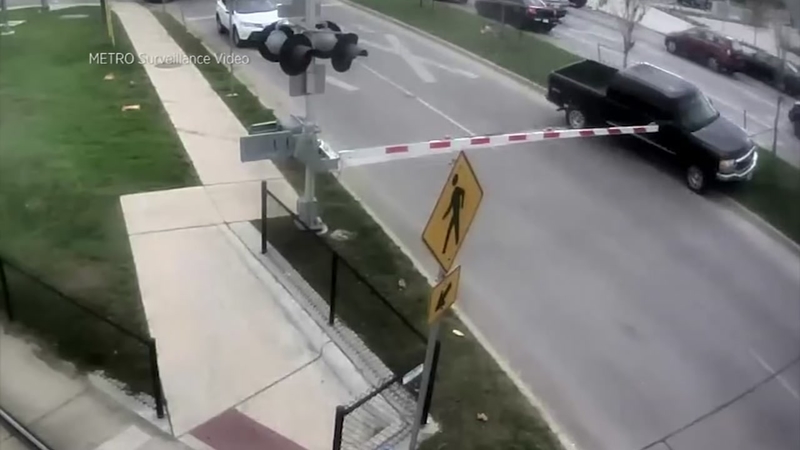 HOUSTON (KTRK) -- The gates near METRO's multi-million dollar light rail lines are malfunctioning every day, and Lucious Curtis Jackson sees it all the time.

"Every day," said Jackson, standing in the rutted parking lot outside the east Houston stone yard where he works. "Ever since they had this rail coming through here, we've had problems."

Jackson's job site is on Griggs Road, along METRO's Purple Line. The problem Jackson sees in the gates is caused by a tiny device called an axle counter. The devices are embedded in the tracks and designed to detect the metal train axle as it passes over.

When it's working correctly, the axle counter closes the safety gate once a train gets close, preventing cars from passing on to the tracks. When the train is safely out of the zone, the axle counter sends the gate up again.

That's when it works. METRO admits there are moments every day when it doesn't.

Ashley Tran, who lives near another Metro Light Rail line, told us she has problems several times a week. "They go down or stay down forever," she said.

In an interview with ABC13, METRO CEO Tom Lambert could not cite specific statistics, but admitted it is an everyday problem. "We had a technology that didn't work," Lambert said of the axle counters. He puts the responsibility to fix it squarely on Houston Rapid Transit, the contractor working with METRO to build Houston's light-rail extension.

Metro's known about the problem since before the rail expanded in 2015.

After extensive testing, METRO and its contractor blame the problem on hot weather, cold weather standing water or rain -- all of which apparently make the axle counters go off mistakenly.

As ABC13 Investigates dug into METRO's own emails on the issues, we found one from a METRO consultant warning it can be something far more mundane: metal shoes. The metal on a tap shoe or steel-toed boot would be enough to trick the axle counters into thinking a train is coming by.

The devices are, in essence, electrical circuits. If the metal on the shoes closes the circuit, the gates can come down. In an email last year, a METRO consultant said a metal shoe actually made it happen, telling METRO bosses, "When the kids in town figure they can get crossing gate to come down with a garbage can or paper clips, ain't we got fun?"

When ABC13 Investigates went looking for the axle counters, we found them in a track side pit so filthy METRO crews needed a shop-vac to suck out the muck just to work on them.

METRO says the devices are being replaced with a different version of the same technology from a different manufacturer. They are going back in the same mucky holes.

Lambert told us, "[The new version has] been used all across the country. Probably 140,000 units in use all around the world. We're seeing very good reliability [in testing.]"

METRO's contractor told the agency's board there have been no issues in testing the new devices, despite a pretty clearly worded late August email from METRO's top brass revealing "the number of failures is increasing."

ABC13 Investigates tracked down the METRO boss behind that email, who said he got the answers he needed and there have since been no issues.

After getting complaints, ABC13 Investigates asked for videos of the broken gates from METRO's surveillance system. After initially claiming they didn't have any, subsequent repeated requests turned up videos of drivers trying to force the gates up.

A utility worker tries -- and fails -- to raise a broken METRO gate that is blocking traffic.

Another video shows drivers going around lowered and broken gates.

Another shows a Houston police officer stuck for precious minutes before turning around.

An HPD officer turns around after a METRO gate is stuck.

Most show the solution to be a METRO employee driving up from a central maintenance area and resetting the axle counting system.

Lately METRO has taken to preemptively dispatching maintenance employees to high-traffic gates just in case the expensive system you paid for breaks down.

"There was always somebody watching it," said Dee Winters, who works near one of the busted gates and frequently passes a METRO employees sitting in a truck waiting for a break down.

The agency remains confident the issue will be solved in time for the Super Bowl in February 2017.
Related topics:
houstonmetroted oberg investigatestrain safetyrailroad crossingstrafficsurveillance video
Copyright © 2021 KTRK-TV. All Rights Reserved.
TED OBERG INVESTIGATES
Millions at risk in Houston after GLO review of Houston housing
13 Investigates how many repeat offenders are out on bond
'When it all got real': HFD logs show real-time Astroworld Fest chaos
Astroworld's head of security, risk management not licensed with state
TOP STORIES
Money in Lakewood Church wall may be tied to 2014 theft, HPD says
Fugitive task force searches for parents charged in MI school shooting
Fatal West Loop crash prompts traffic backup at 18th Street exit
Pasadena PD searching for suspect who stole Boy Scout trailer
Family of Navy vet shot to death on N. Fwy searching for answers
Watch 'ShopLocalish: Holiday Deals and Steals' with Tory Johnson
First, it was catalytic converters, but thieves moving to this part
Show More
Record highs possible Saturday, and Sunday will be steamy too
UH could turn national title picture upside-down if it beats Cincy
Mark Cuban buys entire Texas town, but what will he do with it?
How new TX law could impact topics educators can discuss in classroom
Omicron variant discovered in at least 7 US states
More TOP STORIES News