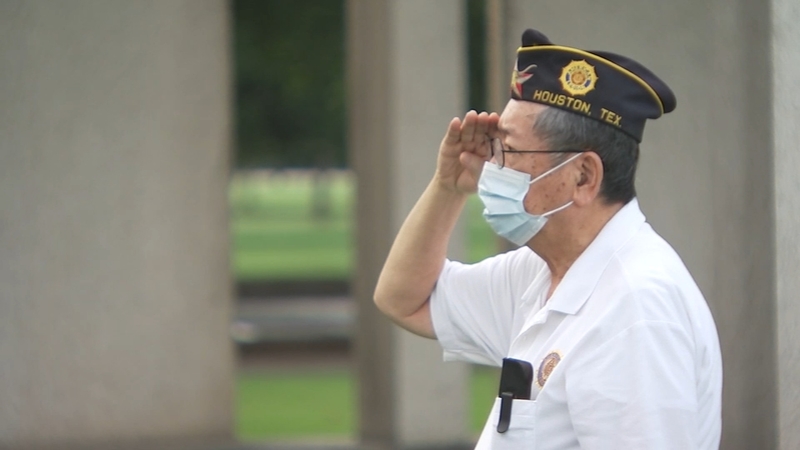 HOUSTON, Texas -- As Americans gather together to memorialize the nation's fallen soldiers, many loved ones will be faced with new limitations due to the COVID-19 pandemic.

Still, even though the pandemic got in the way of the typical observance at Houston National Cemetery, it did not stop this important event on Memorial Day.

"Our flag does not fly because the wind moves it, it flies with the last breath of each soldier who died protecting it," said Congresswoman Sheila Jackson Lee.

During normal times, hundreds of family members of the fallen would be at the cemetery, watching as a wreath is laid and praying for their loved ones who made the ultimate sacrifice for their nation.

But as the 21-gun salute rang out, only a few were there to witness it.

The Director of the Houston National Cemetery asked the public not only keep fallen service members in their thoughts, but also those who have lost their lives to COVID-19.

Later in the morning, another ceremony was held for fallen service members, veterans and their families at Houston's WWII Memorial Plaza.

Remembering and honoring those who have served at #MemorialDay event in the #Height pic.twitter.com/1l9T4aVaeu

Houston Mayor Sylvester Turner attended the event, which was also hosted by Lee.

"During the midst of a pandemic that America has never seen, we refuse to not honor those who have fallen and the many who are veterans who continue to stand in honor," Lee said.

During the ceremony, the Texas National Guard was honored for its work during the pandemic.

"The soldiers and airmen are currently serving on the COVID response. They are at the food bank. They are testing here in the Houston area, Del Mar Stadium, Butler Stadium and various other points," said Command Chief Master Sergeant Michael Cornitius with the Texas National Guard. "They're very involved , and they're proud to be doing what they're doing, because ultimately us as guardsmen, we are here to serve you, the state of Texas, along with the nation."


Among the memorable moments at the WWII Memorial Plaza Ceremony was when the last living Buffalo Soldier, Sgt. Major James Williams, spoke.

Williams served in the Korean War and did four terms in Vietnam, when he joined the Army in 1950. He and his fellow black soldiers were not allowed to eat, sleep or participate in the same activities with their fellow white soldiers.

Williams is now a proud retired member of the United States military.

"I'm very pleased and very proud that for all men and all boys regardless of race, creed or color, they wear a uniform, and all it stands for, which is a beautiful country," Williams said.

Sgt. Major James Williams faced several challenges including racism and segregation, but he says he is a proud member of the U.S. military.

President Donald Trump also made Memorial Day appearances at Arlington National Cemetery, where he laid a wreath at the Tomb of the Unknown Soldier, and then at Baltimore's historic Fort McHenry.

"Together we will vanquish the virus and America will rise from this crisis to new and even greater heights," the president said. "No obstacle, no challenge and no threat is a match for the sheer determination of the American people."

The Fort McHenry National Monument and Historic Shrine is where a poem, written after a huge American flag was hoisted to celebrate an important victory over the British during the War of 1812, became "The Star-Spangled Banner." The fort is closed to the public because of the pandemic.