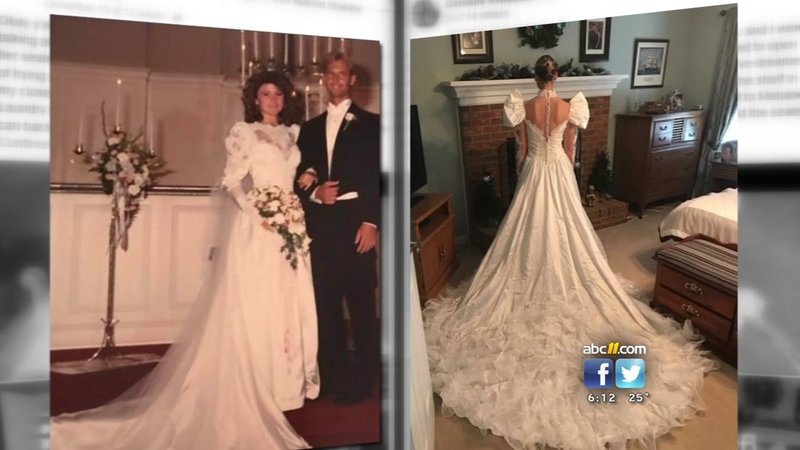 Danielle Arneson said just last week her mom wanted to show her the wedding dress she had worn in 1988.

They pulled out the can it was preserved in and her mom, Cindy Arneson, quickly saw it was not the dress she wore when she walked down the aisle.

"Thirty years is a long time," said Cindy. "But if there was no hope we would never have put that post out."

Danielle put her mother's wedding photo and a photo of the dress they have on Facebook. The post has already been shared more than 5,000 times.

The Arnesons live in South Carolina, but Cindy is from Mebane. She said she moved away after she got married in 1988. After the wedding, she said, her mother took the dress to Mebane Laundry and Dry Cleaners to be preserved. When Cindy received the dress she never thought about it again - until last week.

Cindy Arneson in her missing wedding dress in 1988.

"My dress had no ruffle on it, so I know it wasn't mine," Cindy said.

She said she doesn't have any use for the dress herself right now, but had hoped to offer it to her daughter one day when she gets married.

"She is my only daughter, so the hopes of maybe her using some part of my dress in her wedding," Cindy said.

After the discovery, they called Mebane Laundry and Dry Cleaners.

The owner told them the same thing she told Eyewitness News when we reached out. She said she has only been the owner since 2005, and that the previous owner has passed away. She also said records were not computerized back then so it's all gone.

"My feeling is it was an honest mistake," Danielle said. "The dry cleaning tag on the dress compared to the number that they wrote on my card is just one digit off."

Danielle put the photos of the dresses on Facebook and is asking anyone who may have had their wedding dressed preserved around July of 1988 at Mebane Laundry and Dry Cleaners to check their dress.

In just one week, the dresses have been shared thousands of times.

"Mebane has always been a special place to live," Cindy said. "Growing up there, I knew that and the true heart of Mebane is still the same, it's the people taking care of their neighbor and community."

She went on to say the outreach outside of Mebane has been overwhelming with people reaching out from across the country.

So Cindy and Danielle are hopeful the story will one day reach the right person.