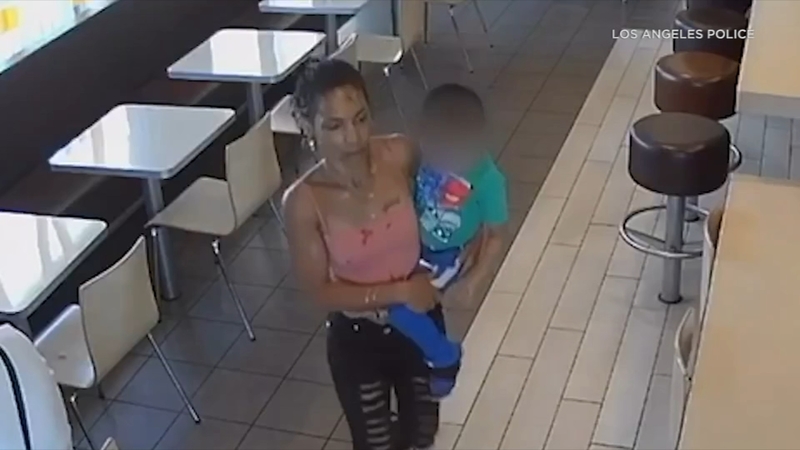 LOS ANGELES, California -- A woman has been arrested in connection with an attempted kidnapping of a young child, which was captured on surveillance video at a fast-food restaurant in Los Angeles, authorities said Thursday.

Maralyn Ramos, 33, was taken into custody Wednesday evening in the area of San Pedro and Agatha streets in downtown, according to a Los Angeles Police Department spokesperson.

We need your help to identify & arrest this kidnap suspect. On May 14 she kidnapped a 4 yr old from inside a McDonald’s restaurant on Olympic Blvd & Central Ave, but fortunately witnesses intervened & she let the child go. Any info contact LAPD RHD Detectives (213) 486-6840. pic.twitter.com/afwKooT1Bn

The incident occurred at 3:15 p.m. on May 14 at a McDonald's at 1310 E. Olympic Blvd., where the suspect allegedly picked up a 4-year-old boy and tried to get into a parked vehicle. She fled on foot after being stopped by a witness, police said.

Surveillance video released by authorities shows a woman picking up a young boy and walking out of the restaurant. A young girl who was sitting nearby followed the woman outside and alerted other adults.
Report a correction or typo
Related topics:
californiasearchattempted abductionmcdonald'skidnappingu.s. & worldcaught on camerasurveillance video
Copyright © 2022 KABC Television, LLC. All rights reserved.
TOP STORIES
Bodies found in back seat and trunk of burning vehicle in Liberty Co.
Manhunt for Pct. 5 corporal ambush suspect ends with arrest in Mexico
Search underway for suspect in Texas City double shooting
You could get paid to get your COVID vaccine or booster
Will Clayton find love in Houston? The Bachelor announces watch party
Kathryn Kates, 'Orange is the New Black' actress, dead at 73
Texas brothers accused of killing stepfather for abusing sister
Show More
6 injured in explosion at Louisiana chemical plant
Supreme Court Justice Stephen Breyer to retire
Houston dries out today and tomorrow before 2 cold fronts
Amy Schneider's historic 'Jeopardy!' run comes to an end
Fed plans to raise rates as soon as March to cool inflation
More TOP STORIES News