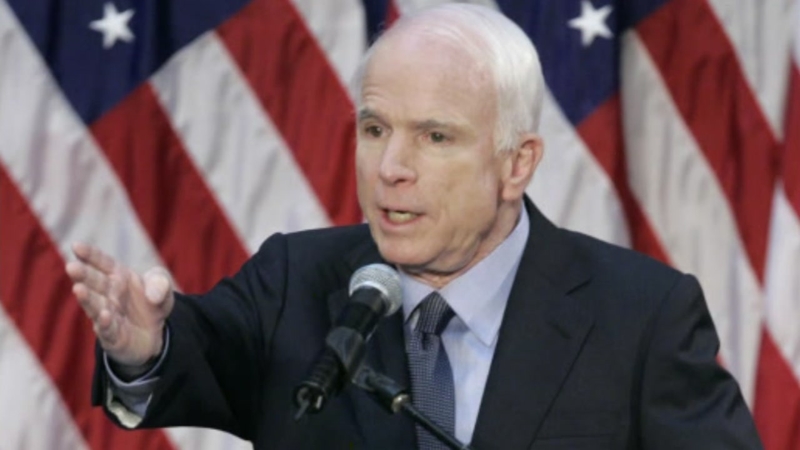 WASHINGTON, D.C. (KTRK) -- Sen. John McCain is being remembered for his service in war and in Congress by presidents and lawmakers. The longtime Arizona Republican died Saturday after a yearlong battle with brain cancer.

Many politicians and family members took to social media to honor the life and legacy of Senator McCain.

McCain is expected to be honored in Arizona and Washington before being buried, likely this coming week, at the U.S. Naval Academy Cemetery in Annapolis, Maryland. Bush is among those expected to speak at McCain's funeral.

My heart is broken. I am so lucky to have lived the adventure of loving this incredible man for 38 years. He passed the way he lived, on his own terms, surrounded by the people he loved, in the the place he loved best.

My deepest sympathies and respect go out to the family of Senator John McCain. Our hearts and prayers are with you!

Our statement on the passing of Senator John McCain: pic.twitter.com/3GBjNYxoj5

Statement by former President @GeorgeHWBush on the passing of U.S. Senator John McCain of Arizona. pic.twitter.com/joT1reIihM

John McCain was many things – a proud graduate of the Naval Academy, a Senate colleague, a political opponent.

But, to me, more than anything, John was a friend. He will be missed dearly. pic.twitter.com/AS8YsMLw3d

.@SenJohnMcCain lived a life of service to his country, from his heroism in the Navy to 35 years in Congress. He was a tough politician, a trusted colleague, and there will simply never be another like him. My thoughts and prayers are with Cindy and his entire family.

Senator John McCain was a patriot, and an extraordinary American war hero. Heidi and I send our heartfelt thoughts and prayers to Cindy, and to the entire McCain family, as they grieve the loss of a loving husband, father, and grandfather. May he Rest In Peace. pic.twitter.com/PkOCPFVdf7

Senator John McCain was an American patriot and hero whose sacrifices for his country, and lifetime of public service, were an inspiration to millions. Canadians join Americans tonight in celebrating his life and mourning his passing.

America and Freedom have lost one of her greatest champions.

….And I’ve lost one of my dearest friends and mentor.

I will need some time to absorb this, but I want Cindy —and the entire McCain family — to know they are in my prayers.

John McCain was a great American, a terrific Senator, and a wonderful friend and mentor who taught me so much. May God be with this hero who has earned his rest.

Words cannot express the sorrow I feel at John McCain’s passing. The world has lost a hero and a statesman. Cindy and the McCain family have lost a loving husband and father. I have lost a wonderful friend.

"Some lives are so vivid, it is difficult to imagine them ended. Some voices are so vibrant, it is hard to think of them stilled. John McCain was a man of deep conviction and a patriot of the highest order.” [...] Full statement by President George W. Bush https://t.co/FQVYWIUyGL pic.twitter.com/W8LCxJXRLi

The Senate, the United States, and the world are lesser places without John McCain.

Nothing will overcome the loss of Senator McCain, but so that generations remember him I will be introducing a resolution to rename the Russell building after him.

RIP Sen. McCain. Thank you for your service. Love of country and its people transcends party. 💙🇺🇸 pic.twitter.com/DlYdUiEQfg