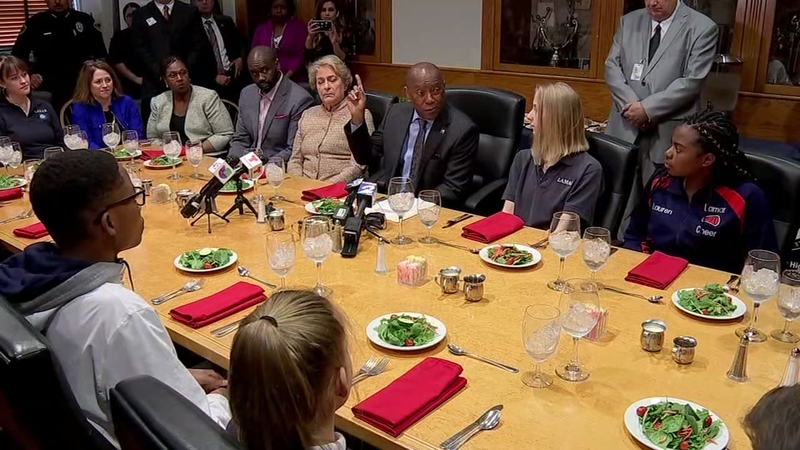 The meeting comes two weeks after DeLindsey Mack, a Lamar High School Student, was shot to death near campus.

Investigators say the shooting appeared to be gang-related, and a part of back-and-forth killings happened in a gang war.

After the deadly incident, 17-year-old Elizabeth Nelson-Fryar wrote a letter directly to Turner expressing her concern for student safety.

"We have about 10 campuses right now that the city has agreed to support by supplementing and adding additional patrols," Lathan said.

On Tuesday, student Elizabeth Nelson-Fryar provided Eyewitness News with a copy of her letter to Turner. It reads:

Mayor Turner,
My name is Elizabeth Nelson-Fryar. I am a seventeen year old high school student at Lamar High School. We are the second largest school in Houston and we need help. In five days, four of my classmates have been shot, three of them have died. We have had a shooter come onto our campus two years in a row. Today, a fellow senior was murdered during lunch on the street in front of my school. We were on lockdown for almost four hours. We have been through so much emotional and mental pain these past five days, and we need help from government officials like you to keep us safe. We cannot do this alone, and we cannot afford to waste anymore time. The longer we wait, the more children will be killed. I am losing faith in our country, state, and beautiful city every time I walk into school and see our nation's flag at half mast. I was at the student walkout at city hall last year where you spoke to us. You told us we needed change, we deserved change. Where is that change, sir? We waited. We waited, and more kids, our friends and peers, died because of the wait. This is not the world I want to live in. I will see to it that change is made, but I need, the youth of Houston, need you and our elected officials to protect us.
My mother is a teacher. My brother is in school to become a teacher. While I might be graduating this year, my family will be teaching in your public schools. I cannot and will not stand by and watch those I love get hurt. Please, Mayor Turner. Please help us.