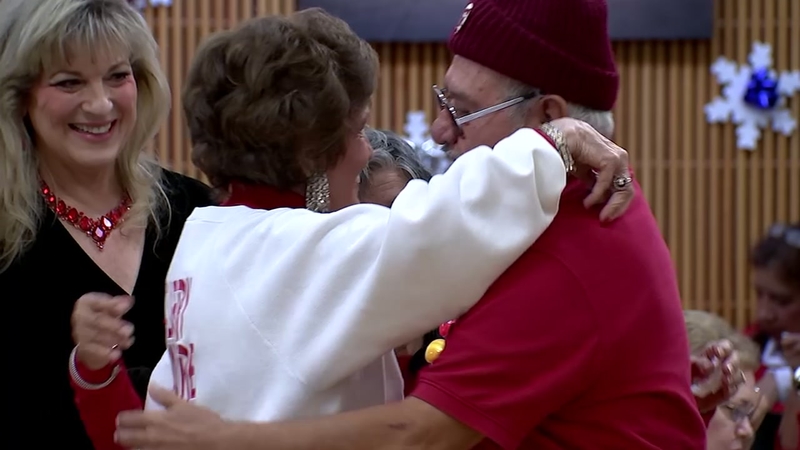 HOUSTON, Texas (KTRK) -- You could say Joe and Yolanda Dominguez are enjoying their retirement age to the fullest. While their festive spirit shines on the dance floor at the Madison Jobe Senior Center holiday party, 2017 was a rough year for them.

"The water just kept coming in, and pretty soon it was in the center of the room," Yolanda Dominguez remembered.

Their home flooded during Hurricane Harvey and they had to evacuate by boat to a local shelter. Living there for the next few days, they were instrumental after the storm efforts by posting numerous messages on social media, asking everyone to keep those affected in their prayers. They made sure others were taken care of by lifting their spirits.

"We were able to line dance with the group, pick them up and encourage them," Joe Dominguez said.

Since then, they've had to live in a motel while they rebuild their home.

"It's been a slow process. It will be a couple months before we're able to move back in," Joe said.

Wanting to do something nice for the couple, Lou Ann Nolan wrote a letter to Mattress Mack, asking if he could help the couple. A few days after sending it in, she was notified that Joe and Yolanda were chosen as one of the recipients of this year's Gallery Furniture Christmas Giveaway.

Georgia Ann Spears from Gallery Furniture delivered the news during the party.

"He's been a principal, she's been in education and everything got wiped out in their house" Spears said. "So when the judges got it, they pulled their name out of the pot and that's what we did, and I was tickled to death."

"It's very moving for us, because there's many others out there that are much in need,"Joe told ABC13. "We appreciate everything Mattress Mack has done for not only us, but others for all the community."

They say it's a gift that will be used well, once they move back home after the new year.