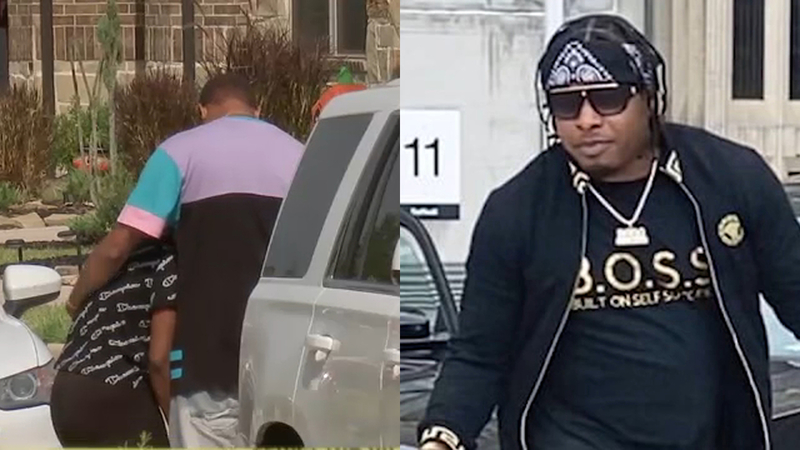 MISSOURI CITY, Texas (KTRK) -- Deputies said the man suspected of shooting and killing his ex-wife's boyfriend waited for the couple to arrive at the woman's Missouri City home before the shots rang out.

Jacobs was the subject of a brief search of the area, but he later turned himself in to Missouri City police. He was booked into the Fort Bend County jail on a murder charge.

The sheriff's office identified the person killed in the incident as 28-year-old Martez Hurt.

"He was at my house this morning. He left with his girlfriend," said Hurt's best friend Ronald Vaughns. "I called him an hour and a half later, nobody picked up. His girl calls me 20-30 minutes (later) and told him he's dead."

Friends said Hurt and his girlfriend's ex-husband have had an ongoing feud, but they never believed it would lead to deadly violence.

"We joke hard, we joke hard to the point where you may not want to be our friends anymore," said another friend, who goes by the rap name Del. "I was hoping this was some sick Halloween joke. Like he took it over the top."

After gathering witness statements and surveillance video, deputies updated earlier information, stating Jacobs waited for the couple to come home. When the couple arrived, the woman was able to exit the vehicle before Jacobs started shooting.

Hurt was still inside the vehicle, lost control and crashed into a nearby fence. Hurt died at the scene.

"But the fact of the matter is we have a young male in his 30s that's deceased, and he was pretty much executed," Sheriff Troy Nehls said earlier on Monday. "He walked right up to the window of that vehicle that went through that fence, and fired several rounds through that front passenger window, and then he walked off. Just walked off. Got back into his vehicle and left."

One neighbor who heard the gunshots said he'd only moved to the area three weeks ago.

"I hear two shots simultaneously, then I hear a scream," said Sofian Sheikh. "About 15 seconds pass by, and then I hear either three or four more shots, followed by another scream, and this one was a bit louder. A couple minutes later, I'm leaving for work, I'm at the exit of our neighborhood, and I just see cop cars swerving in and then a fire truck and ambulance, and I turn around and I'm like, 'No, that was not construction. Somebody got shot.'"

They are no longer on lockout status. Under a lockout, which is different from a lockdown, the building is secured, moving all outdoor activities inside. The district notes that the doors are already locked.

At one point, residents were also asked to stay inside their homes, but there is no longer a threat, Nehls said.

"I was kind of shocked because you try to move into the suburbs to kind of get away, but it just proves that no matter where you go, there's no short of crazy anywhere," said Sheikh.

A neighbor described the moments that he said shook him the morning of a deadly shooting involving a man, his ex-wife and the woman's new boyfriend.

Nehls said this was a domestic situation, adding the killing marks the first homicide in Fort Bend County since January.


If you or anyone you know is a victim of domestic violence, call the National Domestic Violence Hotline at 1-800-799-SAFE (7233) for help.

Press play to hear Sheriff Troy Nehls give an update on Matthew Jacobs, the suspect who shot his ex-wife's new boyfriend to death.