Howard County Executive Allan Kittleman told The Associated Press by phone Sunday that the body of a man had been recovered, along with a woman's body that was recovered earlier Sunday. Both were found in the Patapsco River. Everyone else had been accounted for, he said.

The town, about 14 miles west of Baltimore, received 6.5 inches of rain, according to the National Weather Service, and most of it fell Saturday evening between 7 p.m. and 9 p.m. 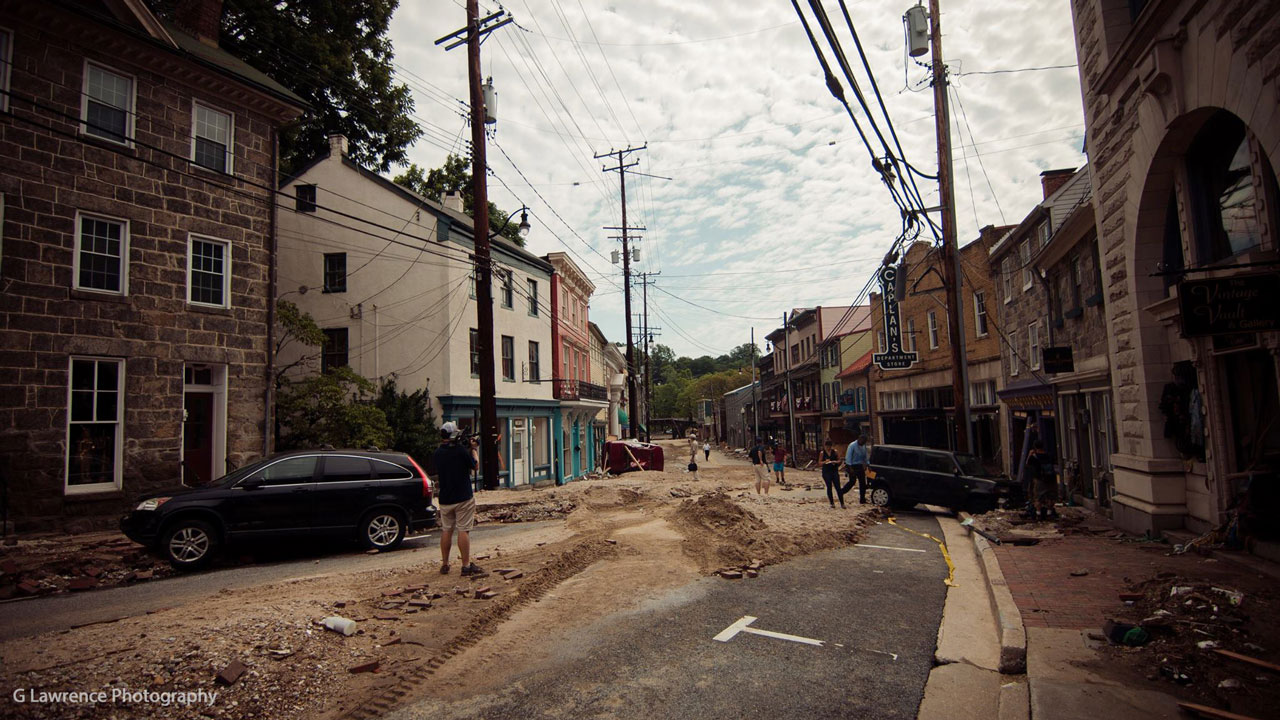 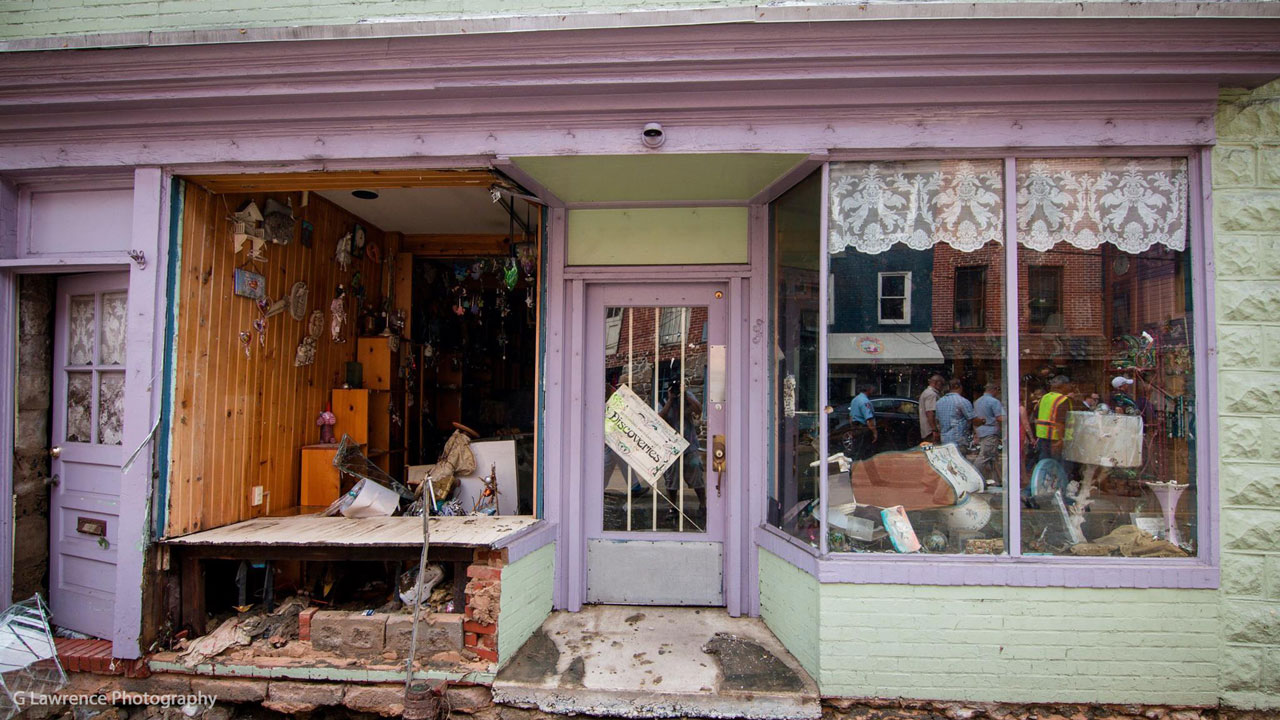 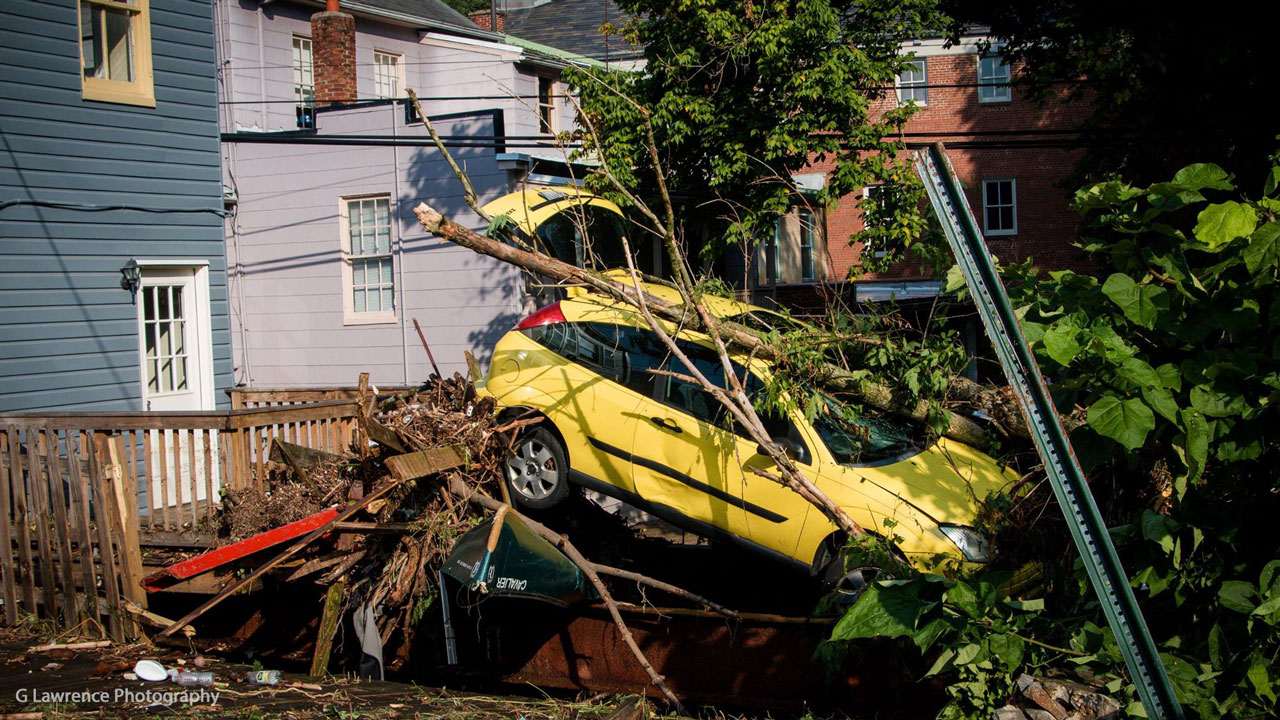 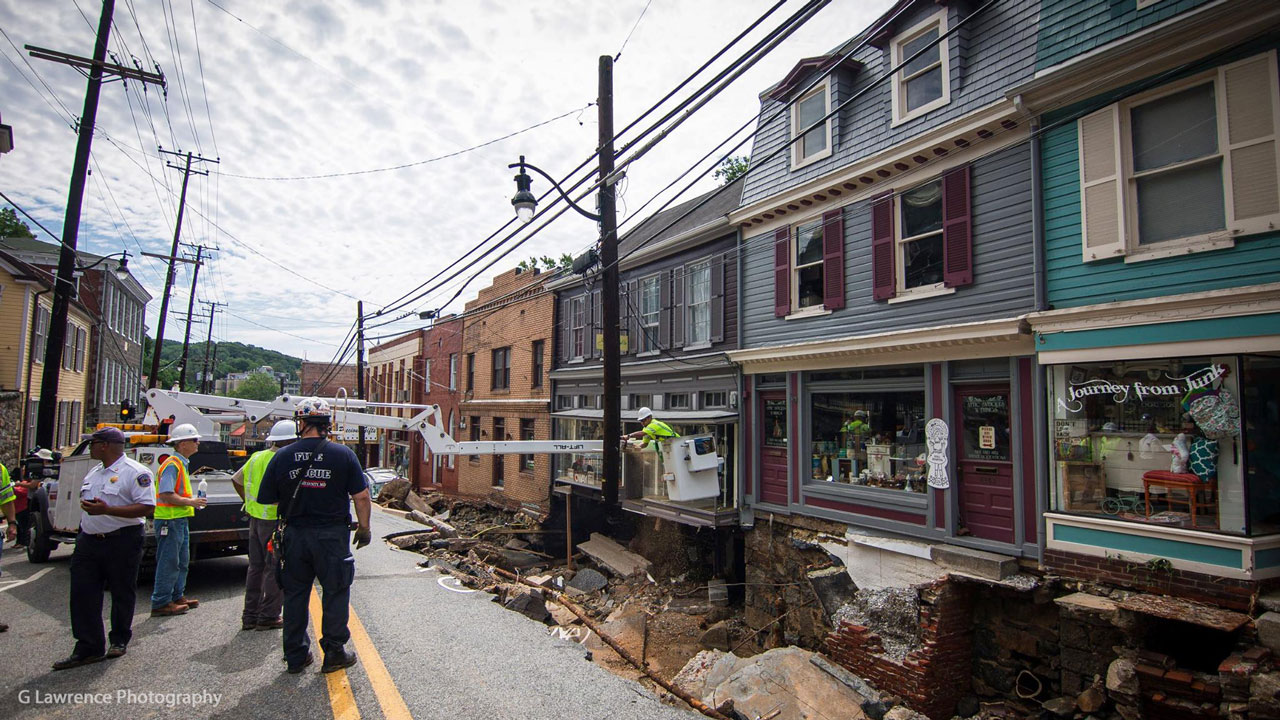 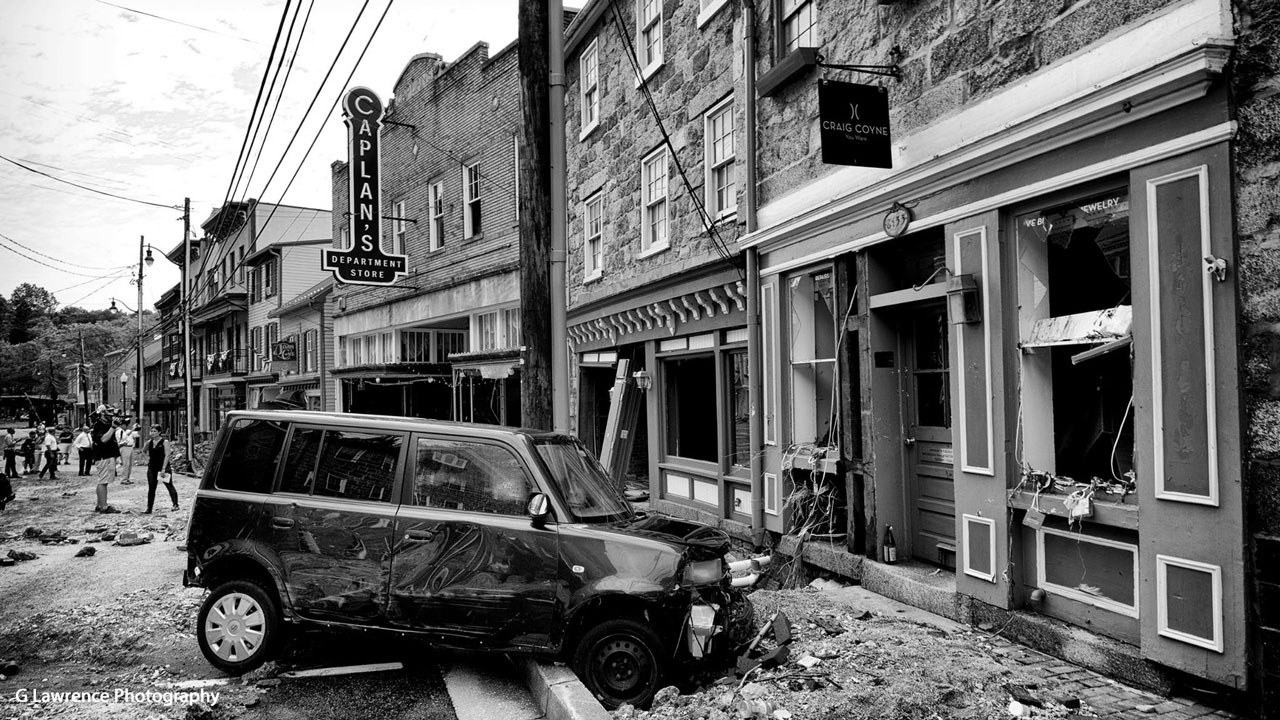 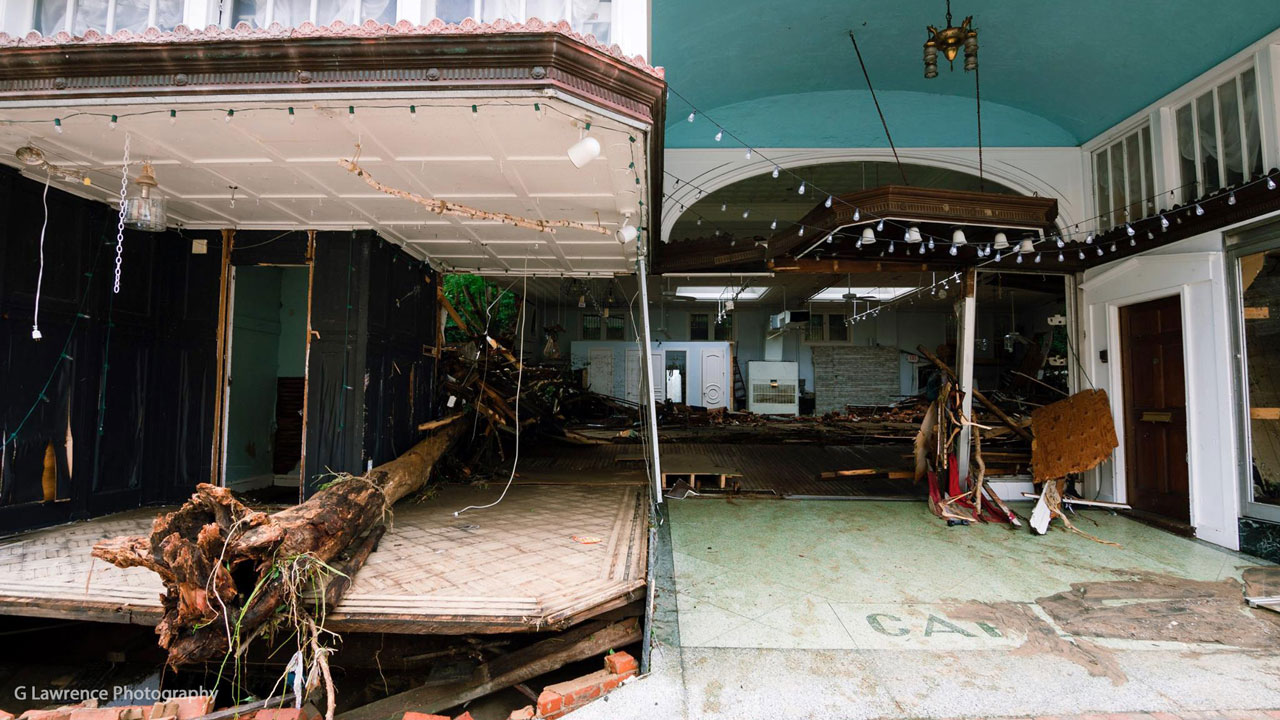 Videos posted on social media showed floodwaters rushing down the town's Main Street, which slopes toward the river, and sweeping away cars. Some vehicles came to rest on top of each other. In one video posted to the Facebook page of a Main Street art gallery, several people can be seen forming a human chain to rescue a woman from a car that was being swept down the street.

One of the victims was a pedestrian who was swept away by floodwaters, and the other was carried downstream after abandoning a stranded vehicle along with another person, who survived, police chief Gary Gardner told reporters at a news conference.

Kittleman said the devastation was the worst he'd seen in 50 years living in the county, including Hurricane Agnes in 1972, which caused the river to overflow its banks. Virtually every home or business along Main Street sustained at least some damage, and the cost of repairs could reach the hundreds of millions of dollars, he said.

"It looks like the set of a disaster movie," said Kittleman, a Republican. "Cars everywhere, cars on top of cars, parts of the road are gone, many parts of the sidewalk are gone, storefronts are completely gone."

Gov. Larry Hogan toured the damaged area Sunday along with Kittleman and Rep. Elijah Cummings, D-Md., who has an office in the town. Hogan declared a state of emergency, which will allow greater aid coordination and assistance.

"No one has ever seen devastation like this in Ellicott City or anywhere in Howard County," Kittleman said. "There are a lot of businesses that are going to be hurting for a long time. There are a lot of people that lost their apartments and their homes."

Johnny Breidenbach, the owner and chef of Johnny's Bistro on Main, said he closed his restaurant around 7:30 Saturday night, before the worst of the flooding, and he hadn't been able to get back there to assess the damage.

"They told me that the door was totally ripped away from the hinges, and I don't know how much water I have inside," Breidenbach told The AP by phone.

He said Ellicott City would recover eventually, but some business owners may not be able to wait long enough to reopen.

"I could be one of those people," he said.

Jason Elliott, a meteorologist with the National Weather Service in Sterling, Virginia, said the town was hit by a series of strong thunderstorms that dumped heavy rain over a 2-hour period. Other areas nearby received heavy rainfall for only about 30 to 45 minutes, he said.

"It's just a matter of the heavy rain being that long in duration. It just happened to set up over that area," Elliott said.

With so much rainfall, there was nowhere for it to go other than the street.

"Everything funneled toward that Main Street area. There's hills on both sides, the river's on the third side," Elliott said. "In this case the Patapsco River was coming up, too. We believe there's some contributions to the flood from both directions."

Ellicott City was established in 1772 as a mill town along the Patapsco, and many 18th and 19th-Century buildings were still intact before Saturday's floods. Once a home to mill workers, in recent decades it has become known for restaurants, art galleries, antique shops and nightlife. Main Street slopes dramatically toward the river and has long been susceptible to flooding.

The county courthouse and government headquarters are located in Ellicott City but are on higher ground.