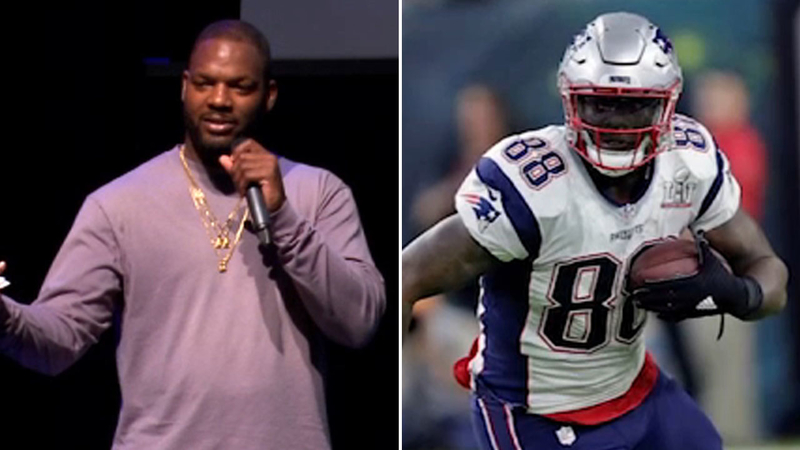 Super Bowl champ inspiring creativity in next generation in Alief

For 10 years, that stage was the gridiron, where he played in front of thousands of fans in the NFL, putting up career-high stats, calling quarterback Tom Brady a teammate and bringing home the Lombardi hardware that teams hunt for season after season.

He was part of the Patriots team that defeated the Atlanta Falcons during Super Bowl LI at NRG Stadium on Feb. 5, 2017, a comeback win in his hometown.

"I remember crying before the game, because I remember how far I came to work to where I got. And just running the hill right down the street right here, and training all summer right here in the city, with the dream of one day making it to the Super Bowl," Bennett said.

In the moments after the victory, achieved in overtime, Bennett admits he didn't realize his team had won.

Now one April morning, he was on a literal stage in an auditorium and still ever the showman.

He's hyping up and charming the crowd, making them scream and chant his name.

He'll ask them to snap their fingers whenever they hear something they like as if they're listening to a poetry reading at a café.

For every response, Bennett is feeding back that energy, owning the moment with the same roar of a player running out of the tunnel at game time, sprinting across the stage and asking the important questions.

"How many own a unicorn?"

He confesses he has a unicorn, too, and its name is Oscar.

You'll find no disagreements here. The hands fly into the air and will later stretch as far as they can go when Bennett encourages those tiny fingers, wiggling and eager to be seen, to push even higher for the dreams that are seemingly right within grasp and all they need do is yank them out of the ceiling.

On this particular day at Kerr High School, Bennett is talking to first through sixth graders who all attend different schools in Alief ISD, the same district where he and his brother Michael, a current NFL player, were raised.

Bennett attended Mahanay Elementary School, Albright Middle School, and Alief Taylor High School, which is down the street from Kerr. He even told the kids about his old neighborhood, mentioning that he didn't live too far from the Timmy Chan's restaurant now on Highway 6 near Bellaire Boulevard.

He spoke fondly of the diverse, eclectic group of kids he grew up around and how those cultures were celebrated.

"At Albright Middle School, we used to do this thing called 'Taste the World,' where everyone from all these different cultures would bring food. I remember bringing in corn bread and candied yams," he laughs.

"The people here are the greatest and they helped shape me into the person I am today," he continued. "Whether it was fishing in the bayou or just riding dirt bikes, the beginning of all my adventures started here in Alief."

The homecoming was not lost on the dozens of students fascinated with the star before them.

"We have almost the same education that he had and we can achieve most of the same goals or we can achieve all our goals because of Alief and other schools," said 9-year-old third grader Cesia Hernandez.

But Bennett's return was not only as the fun-loving athlete who suited up for NFL teams, including the aforementioned New England, Dallas Cowboys, New York Giants, Chicago Bears and Green Bay Packers.

It was also as a bibliophile (his favorite genre is fiction), storyteller and author, who wanted to share that great love for books with students who are already beginning to build their own epic collections of "Diary of a Wimpy Kid," "Pokemon," and to Bennett's surprise, "Fortnite."

"There's a Fortnite book? Is it good?" He asked as a chorus of "Yes!" echoed in the auditorium.

Bennett recently released his third book, "Dear Black Boy," a message of hope he says is based on his experiences.

It's written in the form of a letter, with Bennett signing it on the front cover, "Sincerely, Marty." Toward the back cover, the reader can make and sign their own pledge, whatever that may be.

"Just try to reflect on my childhood where I come from like Alief and some messages that I would like to have here when I was growing up," he said of the inspiration behind "Dear Black Boy."

According to his website, 10 percent of the book's sales will go to charity.

Bennett returned to Alief to not only read "Dear Black Boy" to the students, but act out every movement on the page, hoping to show the next generation of readers and leaders in the community they can be storytellers.

"It was reaching out to all the people. People who thought they couldn't do it just because they're black," said 9-year-old third grader Sean Constable, who was in the audience.

Before "Dear Black Boy," Bennett wrote the "Hey A.J." series, two books inspired by his daughter, where the central character "uses the power of imagination to turn mundane situations into great situations."

"As I started reading books to her, I realized there weren't a lot of books that she could relate to with characters that looked like her. So I figure I'll make one that looked just like her," Bennett explained.

Along with being an author, Bennett, who says he reads at least one book and, sometimes up to three every couple of weeks, owns and runs Imagination Agency Studios. He says the company allows him to tell stories through other mediums including apps, cartoons, interactive series, shorts and films on YouTube.

He also often draws characters, stressing that he just wants kids to be who they are and see how similar they are to each other, regardless of color.

But Bennett's life of finding adventure in books, animations and mystical creatures didn't start when he retired from a professional football career in March 2018. Bennett says he's always straddled the world between sports and art, athletics and fantasy.

Throughout his life, he excelled on both the football field and basketball court (he notes that he still holds a number of records at Alief Taylor and at one point, decided to declare for the NBA draft), but loved creating.

"I always felt like I was the bridge because I was with the athletes, but also with the artists," Bennett said, quickly pointing out that though the athletes who return to the community are often the ones who are celebrated, there are plenty of other people from the area who are successful in other industries, including friends of his from Alief who now work for Nike and the Jordan brand.

Back at Kerr High School, Bennett uses his 6'6" frame to lead the crowd in a round of jazz hands. He then invites a boy to share the spotlight with him on stage, where they talk about believing in dragons.

"Come here my little dragon," he says waving over the student he learns is named Denzel.

The Denzel on stage says he possesses that talent but politely declines to give an impression of the Oscar-winning actor with whom he shares a name.

But for all of the whimsy, Bennett never loses sight of why he wants to help these students create their next chapter, whether they're authoring it, starring in it or both.

"When I look at them, I see myself, and hopefully when they look at me, they see themselves. And for me that's the most empowering thing I could do," Bennett said.