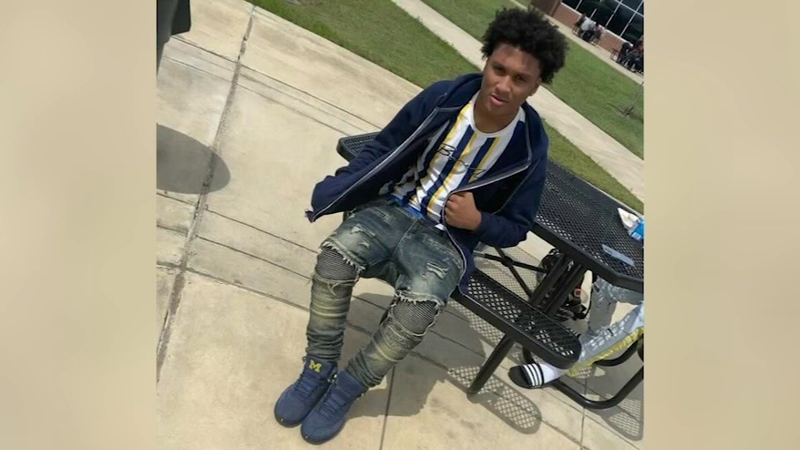 KATY, Texas (KTRK) -- A 17-year-old succumbed to his injuries a week after six people were injured in a stabbing at a Katy-area park.

According to Harris County Sheriff Ed Gonzalez, 17-year-old Marlon Robinson was pronounced dead at a hospital on Sunday. His mother told ABC13 he was stabbed four times.

The stabbing happened on Feb. 14, shortly after 3 p.m. at Beckendorff Park, in the 1800 block of Katyland Drive. Authorities said it appeared to be a school fight involving Katy ISD students, but it's unclear what school the students attend.

At the scene, authorities said six people, most of them juveniles, were injured. At least one 18-year-old was also involved.

In an update Monday, Gonzalez said the charge filed against one of the juvenile suspects had been upgraded to murder.

Update to recent incident at Beckendorff Park (Katy): victim Marlon Robinson (17), succumbed to this injuries and was pronounced deceased yesterday, at a hospital. A charge filed on a juvenile has been upgraded to Murder. #HouNews https://t.co/DNyqeTeRxW

Authorities said 11 to 18 people were involved. They added that some of those involved had bats, and a knife was also recovered at the scene.

"I was told they wanted his mother to cry," Robinson's mother, MarLin Anderson said of the suspects. "So, if that's what they wanted, that is something they got because I can't do anything but shed tears."

"I wish that whoever got that phone call, that he just did not go," Anderson said.

Robinson was a junior at Paetow High School and on the honor roll every quarter, his mother said. He also had a job to make his own money and had already chosen a career path.

According to the Harris County Sheriff's Office, three people, one adult and two juveniles, face charges. All are teens and one of the minors will be charged with Robinson's murder.

Katy ISD police increased patrols around Paetow in the days that followed. District employees have offered Robinson's family their condolences. They moved to the Katy area two years ago.

"I lost a whole son. A 17-year-old son to something that was so senseless. It's such a sad situation," said Anderson.

Katy ISD released the following statement after the latest development:

The District has been informed that one of the youth involved in the heinous and senseless act of violence that took place at Beckendorff Family Park on February 14 has tragically lost his life due to the incident. District personnel's thoughts are with the family, individuals and community impacted. The Harris County Sheriff's Office, the lead investigating agency on the case, has apprised that three individuals have been charged and one individual has been arrested for their involvement in the altercation that took place at the park.