AP
By Will Weissert & Brian Slodysko, Associated Press
WASHINGTON -- Speaker Nancy Pelosi intensified pressure Thursday on House Republican leaders for their handling of a controversial GOP freshman, denouncing them for placing a lawmaker who Pelosi says has "mocked the killing of little children" on the chamber's education committee.

Pelosi's comments focused on Rep. Marjorie Taylor Greene, R-Ga., whose views were in the spotlight even before she joined the House this month. Greene supported Facebook posts that advocated violence against Democrats and the FBI. One suggested shooting Pelosi in the head. In response to a post raising the prospect of hanging former President Barack Obama, Greene responded that the "stage is being set."

On Thursday, Pelosi referred to social media posts reported by Media Matters for America, a liberal watchdog group, in which Greene pushed conspiracy theories or "liked" posts that challenged the veracity of mass shootings at schools in Newtown, Connecticut, and Parkland, Florida.

"Assigning her to the education committee, when she has mocked the killing of little children" at those schools, "what could they be thinking, or is thinking too generous a word for what they might be doing," Pelosi said of Republican leaders. "It's absolutely appalling."

Students who survived the Parkland, Florida, school shooting and families of the victims are calling for Georgia Republican Rep. Marjorie Taylor Greene's resignation, after comments surfaced that showed her agreeing with people who said the 2018 shooting was a "false flag" operation.

While some Republicans have condemned Greene's postings, they were hardly a surprise. The Georgia Republican has expressed support for QAnon conspiracy theories, which focus on the debunked belief that top Democrats are involved in child sex trafficking, Satan worship and cannibalism. Facebook videos surfaced last year showing she'd expressed racist, anti-Semitic and anti-Muslim views. Top Republicans denounced her at the time, hoping to block her from capturing the GOP nomination for her reliably red congressional district in northwest Georgia.

The opposition faded, however, when Greene won the primary and was essentially guaranteed a seat in Congress. By the time she was sworn into office, Greene had ridden with President Donald Trump on Air Force One during his final days in office.

Republican leaders are now confronting a conundrum of their own making. The party largely embraced Greene after she won the primary, making it harder for them to distance themselves from her, especially when many of her views were already well known.

The dynamic raises questions about the GOP's ability - or interest - in moving past Trump-style politics after the former president spent years advancing conspiracy theories of his own.

CNN reported on Greene's Facebook posts, which have since been deleted. She tweeted responses before the story was published that didn't dispute their authenticity or disavow them, saying instead: "Many posts have been liked. Many posts have been shared. Some did not represent my views."

Still, there's greater pressure on political leaders to address extremism after a pro-Trump mob staged a deadly insurrection at the U.S. Capitol. California Democratic Rep. Jimmy Gomez announced Wednesday night that he was readying a resolution to expel Greene from Congress because of her past social media activity.

In a statement to Axios, a spokesman for House Republican leader Kevin McCarthy called the posts "deeply disturbing" and said McCarthy "plans to have a conversation with the Congresswoman about them."

It's unclear when that conversation may happen. McCarthy plans to fly to Florida on Thursday to meet with Trump at his Mar-a-Lago resort.

Republican National Committee Chairwoman Ronna McDaniel called the posts "disgusting," adding that they have "no place in our party" and "should be looked into."

But McDaniel also spoke to a QAnon issue that goes beyond Greene.

"I think it's really important, after what's just happened in our country, that we have some self reflection on the violence that's continuing to erupt," McDaniel said in an interview. "I think QAnon is beyond fringe. I think it's dangerous. We should be looking at that and making sure we don't mince words and when we say that we can't support groups that are initiating violence."

On Wednesday night, a reporter from WRCB-TV attempted to ask Greene about her social media posts during a public town hall in Dalton, Georgia. The reporter was kicked out of the event and threatened with arrest by a sheriff's deputy.

The Whitfield County Sheriff's Office declined to comment and directed questions to Greene's office. A spokesperson for Greene's office said in a statement: "This was a town hall for constituents. Not a press conference."

The FBI has called QAnon a domestic terrorism threat and the Department of Homeland Security issued a national terrorism bulletin Wednesday warning of the potential for lingering violence from extremists enraged by President Joe Biden's election and emboldened by the Jan. 6 attack on the Capitol.

Greene's situation is somewhat reminiscent of former Rep. Steve King, R-Iowa, who was stripped of all his committee assignments by his own party's House leadership after expressing support for white supremacists in 2019. National GOP groups shunned King in the party's Iowa primary and he was defeated, but he steadfastly maintained that he was adhering to his constituents' beliefs more than most of the rest of his party.

Greene's online agitation goes beyond past Facebook posts - including making a video that falsely suggested the 2017 Las Vegas mass shooting that killed 58 people was staged to advance gun control legislation.

Since winning her congressional seat, Greene has sought to capitalize on her growing national notoriety with conservatives, spending more than $206,000 to lure in new donors through Parler, a social media site favored by Trump supporters and right-wing extremists.

The site was effectively booted from the internet following the mayhem at the Capitol after Amazon, which hosted the site, decided Parler wasn't doing enough to police users who incited violence. Before its removal, Greene's spending super-charged her presence on Parler, with some of her posts reaching millions of users, according to an analysis of data by The Associated Press.

She frequently attacked Democrats and railed against coronavirus pandemic safety measures, like mask-wearing. Greene also called on Congress to overturn the results of Biden's election.

"I'm tired of seeing weak-kneed Republicans play defense. I will go on the attack," Greene said in a Nov. 18 post. "It's our 1776 moment!" she posted the day before the mob overran the Capitol.

"You have members of Congress who do not feel safe at work right now because of the violent attempted coup," said Melissa Ryan, CEO of consultancy group Card Strategies, which researches online disinformation and right-wing extremism. "And then you have politicians like Marjorie Taylor Greene who are not just stoking the fear, but using it as a fundraising tool."

Greene is now texting supporters, seeking to raise money for her attempt to "impeach Biden." The fine print of her solicitations, however, shows that any funds she takes in will instead be routed to her campaign account. 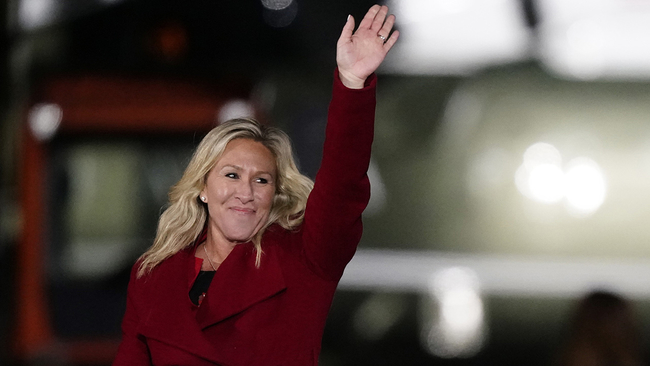