REMEMBERING THE FALLEN: All 16 victims of military plane crash identified 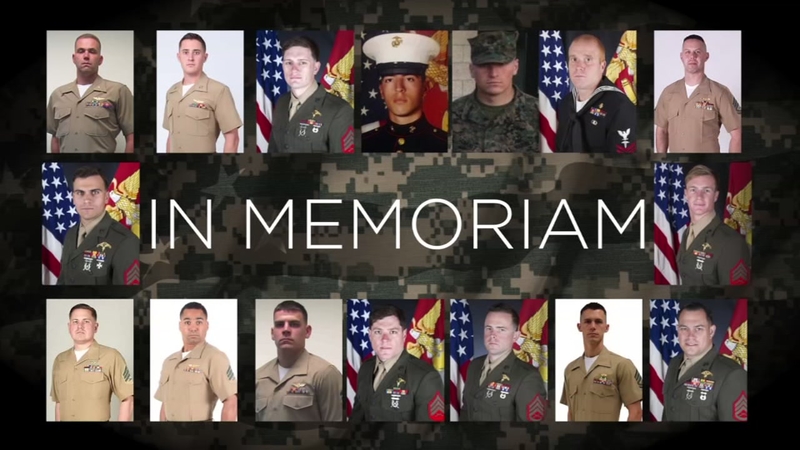 Remembering the servicemen who died in tragic plane crash

The 15 Marines and a Navy sailor killed in a military plane crash earlier this week in Mississippi came from around the country. Six of the Marines and the sailor were from an elite Marine Raider battalion at Camp Lejeune, North Carolina. Nine were based out of Stewart Air National Guard Base in Newburgh, New York, home of a Marine Aerial Refueling and Transport Squadron.

Mississippi Gov. Phil Bryant said the final set of remains was recovered Thursday from a farm field where the KC-130 crashed Monday. Most of the remains have since been flown to Dover Air Force Base in Delaware, where military officials say they will be processed by Air Force mortuary personnel and then released to their grieving families.

Here are brief portraits of some of the victims:

Dietrich Schmieman joined the Marine Corps at age 19 with an ambition to serve in special operations, his father said.

Schmieman, 26, grew up in Richland, Washington, and enlisted after completing an academic program that allows students to earn a college associate's degree while they finish high school, said his father Eric Schmieman.

"The most common comments his friends made about him were that he helped them, and he inspired them to live life to the fullest," Eric Schmieman told The Associated Press in a phone interview. "He certainly did that himself."

He said his son served in a reconnaissance unit before joining the elite Raider command about two years ago.

The Rev. Corey Smith of Richland Lutheran Church, who was Dietrich Schmieman's youth pastor from sixth grade until he enlisted, said the young man joined the Marines out of a desire to serve others.

"That's the kind of heart he had," he said in a phone interview. "He loved to help people."

Capt. Sean Elliott, one of the plane's pilots, had a longtime love affair with the C-130. His father, John Elliott, tells San Diego's Union-Tribune that his son used to take a model C-130 loaded with toy soldiers to bed when he was 4 years old.

"He slept with it like you would a teddy bear," John Elliott said. "A big plane, in the bed. A silly plastic thing, with the toy soldiers inside. It went to bed with him every night for quite a long time."

His mother, Cynthia Elliott, said her son was "enamored" with aircraft and the military at least since attending a childhood air show.

A prep standout in tennis, the 6-foot 2-inch Elliott was renowned for a booming serve. His younger brother Erik went pro, but Sean Elliott went to officers' school, graduating from the University of California, Davis.

"He was always looking out for others, starting with me but then continuing to his fraternity brothers and his Marines," Erik Elliott said.

Elliott got his Marine Corps call sign "Puffin" because he refused to hunt the nesting and defenseless birds during a stopover in Iceland, his father said.

Navy Corpsman Ryan Lohrey was a high school football standout in Indiana who had gotten married weeks before the crash.

His father, Michael Lohrey, told The Herald Bulletin newspaper that his son enlisted in the Navy after high school and survived two tours overseas in Iraq and Afghanistan, making his death on the way to training all the more tragic.

"I never would have expected this to happen," he said.

Lohrey said his son, who had two children of his own, wanted to use his skills as a medic to eventually pursue a career in nursing. The younger Lohrey was married in early June.

A high school football and golf teammate, Chris Parrish, told the newspaper the Navy corpsman had a fearless streak when it came to BMX biking, skateboarding and roller-blading.

"He wasn't scared of anything," Parrish said. "That's probably why he was so good in the Navy."

Indiana's governor joined a congressman and senator in offering condolences.

His mother confirmed her son's death in a telephone interview Wednesday with The Frederick News-Post.

"Every breath of air you take, all the things you're able to do, you can do those things because of people like my son," she told the newspaper. "I'll never forget that."

Kundrat graduated in 2002 from Gov. Thomas Johnson High School in Frederick, where he played football and lacrosse. He also was an Eagle Scout.

After graduation, he joined the Marines. And in 2004, Kundrat married classmate Ashley Cregger, according to the paper. It said they lived in Holly Ridge, North Carolina, and had two children together.

Gunnery Sgt. Brendan Johnson, 46, told his father he had the best job in the Marine Corps.

Kevin Johnson of Colchester, Vermont, recalled his son said, "I get to fly everywhere." His son was based at Stewart, traveling back and forth across the Atlantic and Pacific and touring many countries.

Brendan Johnson joined the Marines after graduating from Johnson State College in Vermont. A fine arts major, Johnson once surprised the family with portraits he painted based on old pictures of his grandfather and father-in-law when they graduated from Navy boot camp.

The elder Johnson said his son, who was taking on more administrative work, was looking to retire next year. Plans included possibly returning to school for a master's degree and then moving from Newburgh New York, to Montana, home to his wife Anna. He said Brendan loved the outdoors and was considering a job as a park ranger or a fish and game warden.

"He was thinking of looking into that, but he said, 'You know, I've got some time,'" Johnson said. "We'll miss him."

Sgt. Julian Kevianne, 31, joined the Marines in 2009 because he wanted to protect and defend the country, his brother told the Detroit Free Press.

"The Marines knocked on my mother's door at 2 this morning," Carlo Kevianne said late Tuesday. "They said his plane went down, and they weren't able to find him."

A new concrete walkway was poured Tuesday at Carlo Kevianne's home. Julian's mother, Tina Albo, carved a tribute to her late son: "Piece of my heart is in heaven."

John Allen, a cousin of Kevianne, told The Detroit News that Kevianne talked about joining the military when he was younger. Allen said Kevianne could be quiet with people he didn't know, "but once he was comfortable with you, he was a loud blast of fun."

"We don't have any words right now. We're hurting," sister Tania Kevianne, 27, told The New York Daily News. "He was the best man."

Kevianne, a flight engineer, was based at Stewart and lived with his wife Sherry Jennings-Kevianne in New Windsor, New York.

Owen Lennon, 26, grew up in Pomona, New York, playing football and tennis for Ramapo High School in Rockland County before graduating in 2008.

A man answering the phone at the family's home in Pomona confirmed the death to The Journal News, but said the family was grieving and declined to comment.

Lennon's sister, Kelly Lennon, posted a remembrance on Facebook, saying, "You may have been the youngest, but we always looked up to you. Our hero, Owen Lennon. (broken heart) sending love to the other USMC families that lost loved ones last night."

Lennon was stationed at Stewart.

Joseph Murray's family recalls him as a ukulele player, former surfer kid and deeply religious family man who excelled in the Marine Corps.

Terry Murray told reporters Wednesday the 26-year-old special operations Marine had been a surfer at Sandalwood High School in Jacksonville, Florida, who surprised his military veteran parents by joining the Marines.

The father said his son was at the center of family life and his Marine units, sharing his Christian faith by serving others and his country. Terry Murray said one Marine told him that Joseph hummed praise songs constantly on patrol.

"When Joseph stopped singing praises, they took their safeties off their weapons, because they immediately thought something was up," Terry Murray said.

"He loved to play his guitar and ukulele for us," Gayle Murray said in a statement. "What he wanted most in the world besides our happiness was to destroy evil on this earth.

Murray was stationed at Camp Lejeune.

Dan Baldassare, 20, had wanted to be a Marine since he was in middle school, his friend Dan McGowan told WPIX-TV .

"He actually would bring military gloves to football practice and play with them," said McGowan, who drove his friend to practice in high school. "He was a patriot and all he wanted to do was serve our country. Everyone had a lot of respect for Dan."

On Wednesday, after the crewmaster of the KC-130 died in the Mississippi crash, a marine sergeant guarded the home where Baldassare grew up in suburban Colts Neck, New Jersey.

"We're so sorry and our heart is just breaking, just breaking for them," neighbor Rosalind Innucci, said of Baldassare's parents and sister. Innucci has lived on street for 14 years.

Baldassare was stationed at Stewart.

Staff Sgt. Joshua Snowden, a flight engineer on the transport plane, grew up in the Dallas area and graduated from Highland Park High School in 2004, having already signed up for the Marines, The Dallas Morning News reports.

On Facebook, Quarterman wrote Tuesday that her 31-year-old brother "loved God, his family and friends, and his country. And he died serving his country and God."

Snowden himself often displayed his Texas roots and love of the Dallas Cowboys on Facebook, even while stationed at Stewart.

"I can tell you that Josh loved his family and friends, God, his country, and country-western music and dancing," Snowden's aunt, Linda Hughes, told the Times Herald-Record of Middletown, New York. "He was one of the warmest, kindest, more patriotic people I've ever known."

Maj. Caine Goyette was a KC-130 Aircraft Commander, the Marines said in a news release Friday.

Gunnery Sgt. Mark Hopkins was from Chesapeake, Virginia, the Marines said in a news release Friday. He was a tactical systems operator/mission specialist.