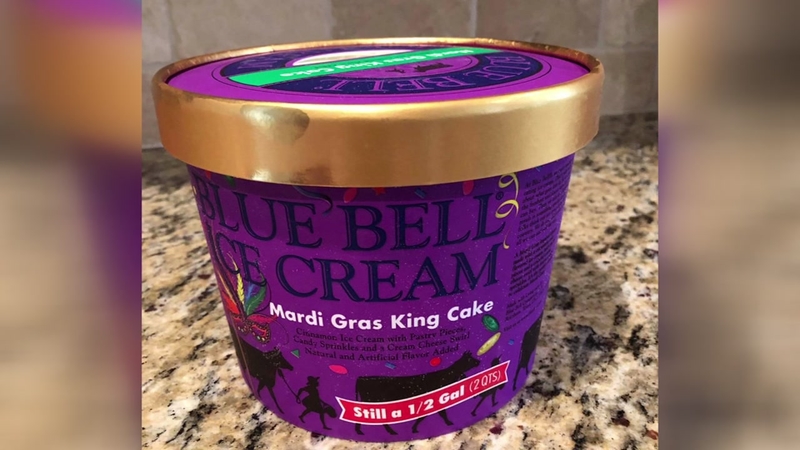 Where is the Mardi Gras King Cake ice cream?

HOUSTON, Texas (KTRK) -- Blue Bell has released a seasonal flavor that has some ice cream fans in the Houston area going crazy.

Photos have surfaced of a Mardi Gras King Cake flavor. The purple cartons are decked out in the traditional Mardi Gras colors complete with confetti, a colorful mask and gold lid.

The treat is a cinnamon ice cream with pastry pieces, candy sprinkles and a cream cheese swirl, just like a king cake.

People have been posting about it online asking where they could find it in the Houston area. Some Blue bell fans have said they spotted it in stores in Pearland and Alvin.

It's possible gallons of the ice cream have popped up in Galveston, too. In fact, the city's official website tweeted a photo of the treat, saying "If you have the chance, get out and try Blue Bell's Mardi Gras King Cake ice cream."

If you have the chance, get out and try Blue Bell’s Mardi Gras King Cake ice cream. You won’t be disappointed! 🤤 pic.twitter.com/O6rK4C8CKd

Others have asked Blue Bell if it can simply be shipped to them, but the creamery tweeted it can't be ordered.

Blue Bell tweeted Friday morning that the flavor is mostly available in Louisiana and some locations in Alabama, Mississippi and Texas.