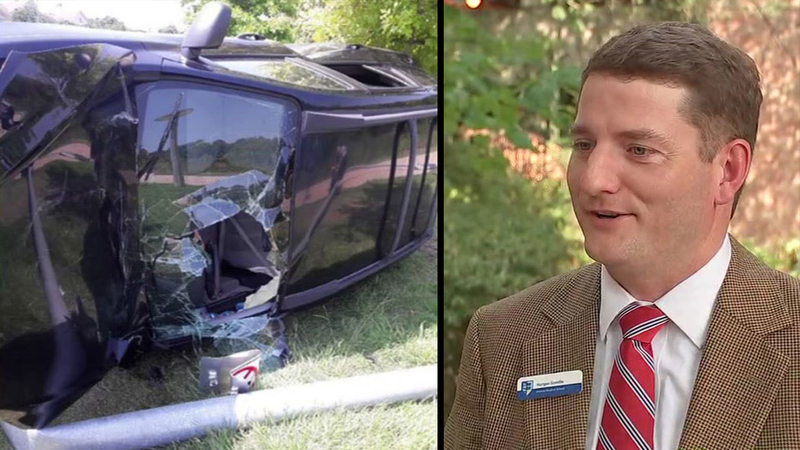 HOUSTON, Texas (KTRK) -- A marathon runner put his skills to use in a way he never imagined when he ran down two people who crashed a stolen car.

This all happened Wednesday on Allen Parkway near Taft.

Two men were later arrested and charged with evading arrest, and it turns out the black Tahoe they were in had been reported stolen just the day before, according to the Houston Police Department.

Police say 18-year-old Shakur Bishop and 21-year-old Delvonte Squire-Wright were driving down Allen Parkway in the Tahoe when they hit another driver.

The Tahoe ricocheted, hitting an electric pole before rolling over.

The SUV came to a stop just 20 yards in front of Morgan Scoville, who ran the Boston Marathon eight times and had no trouble running these guys down.

"It automatically kicked in, gotta do something or these guys are gonna get away, and began chasing them from a distance, telling people to call 911, call 911," Scoville said.

Police eventually arrived and were able to arrest both men.

Scoville is the interim head of the Fay School, and says recent active shooter training kicked in right when he needed it.

The incident earned him a lot of praise from police, and even a handshake from HPD Chief Art Acevedo.
Report a correction or typo
Related topics:
houstoncar crasharrestrunningmarathonsstolen car
Copyright © 2021 KTRK-TV. All Rights Reserved.
More Videos
From CNN Newsource affiliates
TOP STORIES