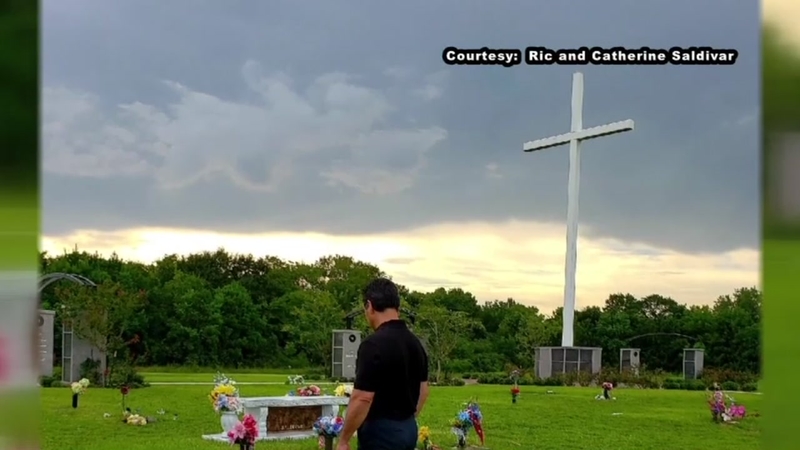 HOUSTON, Texas (KTRK) -- A man who lost six family members during Hurricane Harvey believes he got a sign from above during a recent trip to the cemetery.

Brookside Cemetery is a place Ric Saldivar doesn't like to visit.

"It's hard to see their names on the ground, that's hard," Saldivar said.

Saldivar's parents, great-nieces, and great-nephews were killed after their van was swept away by the floodwaters caused by Hurricane Harvey. Since then, Saldivar says he's seen his family in his dreams.

RELATED: Bodies of 4 kids, 2 great-grandparents recovered after van swept away in Greens Bayou

"That's the only passage to the other side is through dreams," Saldivar said.

With the one-year anniversary approaching, Saldivar decided to visit the cemetery. It was a trip he says that felt a lot like a dream.

"It looked like an angel," Saldivar said. "You could see little wings in the back. I don't know if her leg was bent or anything."

His wife snapped a photo as Saldivar stood at his parents' plaque. In the picture, he believes an angel flew above.

It was a moment not just for him, but his brother Sammy as well.

Sammy, who was trying to bring the kids, and the elderly couple to higher ground when the van was swept into the bayou, moved to Missouri and still struggles with what happened.

"A lot of people were blaming him," Saldivar said. "I said, 'how can you blame him? He was the one trying to take care of everybody when nobody else was there.'"

Saldivar said his brother will return later this month, and he can't wait to show him this photo.

"That was pretty cool," Saldivar said. "I mean. I like that thought. I like that feeling. That she was there."