Man de-escalates SE Houston arrest and helps calm suspect down: 'I don't want you to get hurt' 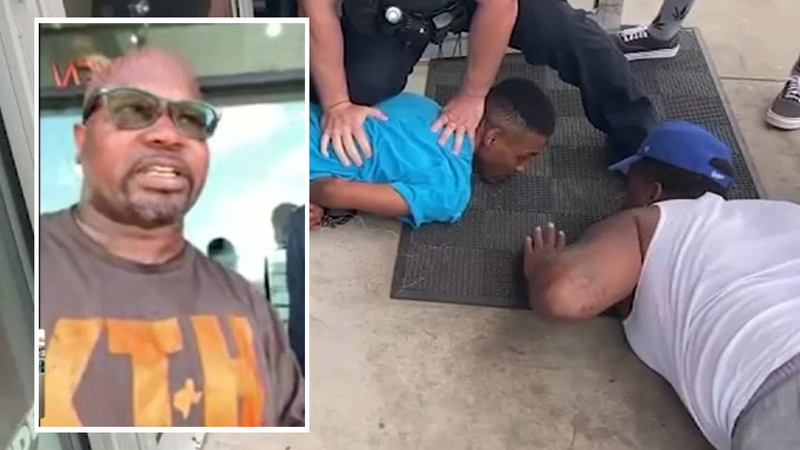 HOUSTON, Texas (KTRK) -- A Houston man saw an opportunity to de-escalate a police encounter that intensified quickly at a gas station in southeast Houston, and says he believes he was at the right place at the right time.

The incident was all captured on video. A man is seen at the gas station on Fuqua pacing back and forth inside.

Witnesses said he had a weapon and may have been on some sort of drug. Bystanders recorded the ordeal as police moved in on him.

"He had a knife, a butcher knife," a witness is heard saying in the video.

That's when Ulerick Fields stepped in. In the video, he's heard calling out to the Houston Police officers to ensure a safe and peaceful arrest.

The officer then turns to the community and those around him to assist. At first, Fields thought the officer was being sarcastic.

"I thought he was trying to bait me into a situation to get me in trouble. But, when he came back and asked again, I knew he needed help. So right then and there, my heart went out to the both of them," Fields explained.

Concerns surrounding police brutality have spurred global protests and cries for change after several high-profile killings of Black Americans, including George Floyd, who died at the hands of police in Minneapolis in May.

Fields could relate to the man on the ground, he said.

Years ago, Fields went from a "career criminal" to seeking God and turning his life around. He said he wanted the suspect being arrested to have that same redemption.

"The suspect needed a chance to have a second chance," Fields said. "Not to get hurt, not to get killed, not to get brutally beat up."

In the video, Fields is seen talking to the suspect at eye-level and coaching him until the end.

Fields then positions the suspect's hands and helps officers handcuff him.

"To me, that should be a training video for society and for the police officers to illustrate how we should work together," said Acevedo.

Fields said he's grateful he was there at that moment. He lives in Atascocita, which is nowhere near the gas station in the video. He said he happened to be on his way to help a friend in that area when he stopped at that gas station for some gum.

It's unclear why the suspect was being arrested. The incident remains under investigation.