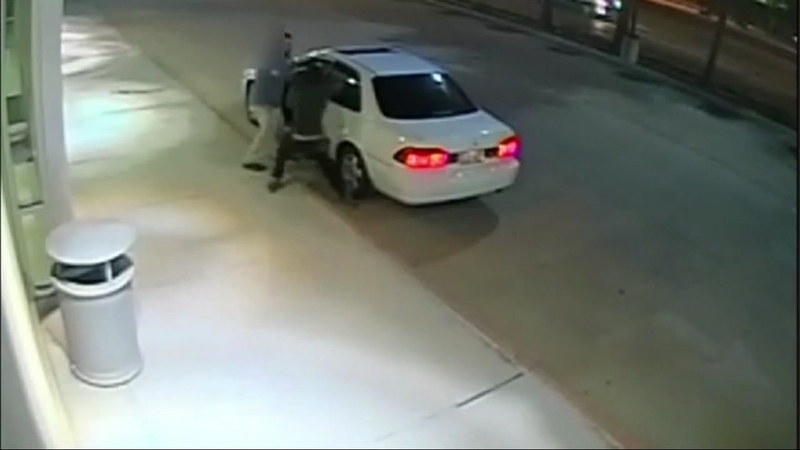 Robber shoots father in front of son in ambush attack

HOUSTON, Texas (KTRK) -- Detectives need your help solving a mystery that's haunted them for years: a lightning fast ambush at an ATM that changed a young father's life in just seconds.

Stunning surveillance video from October 2015 shows the moment an attacker behind a trash can pounces on the victim at a Bank of America in southwest Houston.

The father was unaware that a man was lurking, waiting for him to walk back outside.

"That's exactly what I felt like. He was a beast stalking his prey," said HPD Detective Sergeant Tony Mora.

Surveillance video shows the robber hiding at the bank at 9710 Bissonnet. You see him waiting for the victim to walk out. Then in an instant, you see the thief run up, rob the father and shoot him in front of his son, before taking off.

"He goes in, does his transaction, walks back to his car and he's about to enter in front of his then underage, 8-year-old son," Sgt. Mora said. "This suspect approaches him, confronts him and he exchanges some words, and because the complainant doesn't immediately give up his wallet, he shoots him directly in the abdomen in front of his child."

As the father was bleeding from the gunshot, he didn't go straight to the hospital. Instead he thought of his son.

"He gets in his car and drives home to get his wife first, and then drives to the emergency room so his son will not be alone while he's getting worked on," Mora said. "That one bothered me. It still does."

The father had more than 30 staples in his stomach after the shooting. Detectives want this man off the streets and hope surveillance images of the robber help identify who he is.

"Being that violent and that disregarding of human life, it's just someone we need to get off the street," Sgt. Mora said.

If you know who the man is, you're asked to call Crime Stoppers. You could receive a $5,000 reward.

You can also make an anonymous tip at www.Crime-Stoppers.org.